It is almost a cliché nowadays to declare that The Simpsons stopped being good however many seasons ago. I don’t know anyone who watches it today with the same religious fervor that many fans brought to the show in the early-to-mid 90s. My father, my brother and I didn’t just watch new episodes on Sunday. We also consistently watched an hour of reruns every day after school, quoting our favorite lines back and forth at one another and driving my mother crazy.

As will probably surprise no one, I (any many of my fellow geeks) identified strongly with little Lisa. I, too, was a precocious grade schooler who was most comfortable when her nose was in a book. I, too, vacillated between disdain for my classmates, who ridiculed me for using big words and for being a teacher’s pet, and longing for their friendship. I, too, cared a little too deeply about a number of causes that caught my eye, and experience a naïve but well-intentioned indignation about the unfairness and the injustice that I saw in the world.

So you can imagine my dismay when, a few weekends ago, the writers of The Simpsons used Lisa as the show’s mouthpiece to complain about director Michael Melamedoff and comedian Hari Kondabolu’s The Problem with Apu (2017) by having her roll her eyes at political correctness and the idea that pop culture has a responsibility to think about its own impact on the broader culture. Had the show at long last transformed from the youthful rebel telling snooty authority figures to “eat my shorts” into the television equivalent of an Old Man Yelling at Cloud?

The Problem with Apu begins with Kondabolu performing a set at a club in New York City when someone in the crowd begins heckling him in the cartoonish accent made famous by Hank Azaria. This accent, which Kondabolu describes as sounding like “a white guy doing an impression of a white guy making fun of my father” has haunted South Asian Americans whose friends and classmates had only ever seen one Indian character on television: Apu Nahasapeemapetilon, the owner of Springfield’s Kwik-E-Mart convenience store.

Kondabolu makes it his mission to track down Azaria and ask him why he continues to do that voice, despite telling the Huffington Post in 2013: “I do understand why people could have been offended or upset, and I’m sorry for that.” Along the way, he interviews several of Hollywood’s most prominent South Asian celebrities including Aziz Ansari, Russell Peters and Aasif Mandvi about what it was like to have Apu metaphorically following them around throughout their childhoods. 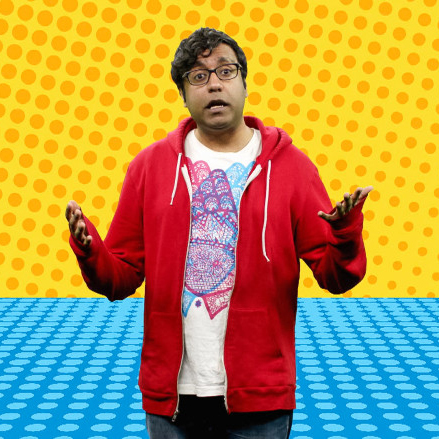 Prominently featured amongst the taunts they remember is Apu’s signature phrase, “Thank you, come again!” Shockingly, this phrase has only ever been uttered eight times during the entire run of the show. This fact blew me away, because I personally remember hearing it over and over again. I figured it was nearly as ubiquitous as other Simpsons catchphrases like “Ay, caramba!” or “D’oh!” How could this be true?

I realized that my memories of this phrase, of this character, are all jumbled up with my memories of my family quoting the show back and forth to each other. For example, I remember my father using the Apu voice as a way to describe brown people whose country of origin he wasn’t certain about. “This guy came into work the other day. He was . . . you know . . . Thank you, come again! Like that!” It wasn’t that my dad was malicious. He just had no other vocabulary, no other cultural touchstones besides The Simpsons with which to understand.  Plus, as I’m sure he would tell you, he loved Apu! Apu had a PhD! He was a dedicated family man and a small business owner, a real American immigrant success story! Comparing someone to Apu should be seen as a compliment!

But, of course, it doesn’t feel like a compliment when the comparison is rooted in stereotype-laden silliness. The Simpsons itself seemed to realize this (or at least to contemplate the possibility) back in 2016, when the episode “Much Apu About Something” introduced the Kwik-E-Mart clerk’s nephew, Jay, a second generation Indian American who is frustrated by his uncle’s shtick: “You’re my uncle and I love you, but you’re a stereotype, man. Take a penny, leave a penny. I’m Indian, I do yoga. Why don’t you go back to the Temple of Doom, Dr. Jones!” Though the two men end up reconciling by the end of the episode and the Springfield status quo is restored, the episode does indicate that the show is aware that its depiction of Apu is outdated at best. In fact, just this month, Hank Azaria told Stephen Colbert that that he would be “perfectly willing and happy to step aside or help transition [Apu’s voice] into something new.”

And so, we come, at long last, to the real purpose of this article: my pitch to the writers of The Simpsons on how they can finally fix their problem with Apu.

The episode opens with Apu paying a visit to Dr. Hubbard and learning, to his astonishment, that the toxic chemicals in the new flavor of Squishee he had been testing in his store have damaged his vocal cords, causing speech to be painful for him. Luckily, he discovers that if he slightly changes his way of speaking, he can avoid using the damaged areas and return to his normal life, pain free. When he returns to work, he discovers that the residents of Springfield resent the change, complaining that they didn’t see anything wrong with his old voice, that it made them happy and they don’t like the fact that it is different all of the sudden. They constantly do impressions of his old way of speaking to try and cajole him to going back to the way he was before so that they don’t have to feel uncomfortable. But Apu responds by telling his fellow townspeople that he is still the same person he’s always been on the inside and that if they can’t accept his new voice then maybe they were never really cared about him as a person in the first place. After all, he will say, he is more than just a funny voice.

Megan Condis is an Assistant Professor of English at Stephen F. Austin State University. Her book project, Gaming Masculinity: Trolls, Fake Geeks, and the Gendered Battle for Online Culture, is out now through University of Iowa Press.

Hari Kondabolu, The Problem With Apu, The Simpson