On average, American women earn 79 cents for every dollar their male coworkers make according to the U.S. Department of Labor. That gap widens further when broken down by race, with black and Hispanic women averaging roughly half the salaries of white men for the same work.

You won’t find these statistics in Lost Wage Rampage. Any larger context hangs unspoken as two female mall employees fume when they find a document revealing how little they make compared to men they work with, men they’ve trained even. At first, their anger dims to despair; they’ve been wronged, but there’s no clear method for how to regain what they’re owed. To complain could risk them getting fired.

“What if we just…take it?” One asks, donning her sunglasses (you can practically hear the CSI: Miami “Yeaaaaaah” in the background). And with that, they launch a crime spree singed by guitar rifts, punk rock, and rage. Players speed through the mall in a jacked car, avoiding police and stealing everything that isn’t nailed down – though is it really stealing if the money should have been theirs to begin with?

The Peabody Essex Museum commissioned Lost Wage Rampage as one of dozens of pieces in its exhibit PlayTime, which explores the role of play and its developing intersection with contemporary art and culture. It’s featured for free as part of the exhibit’s digital collection.

Developer Jane Friedoff had been kicking around the idea for an all-female heist game for years before the museum approached her. The relationship between female friendship and power always intrigued her, she said, something she credits to growing up during the Riot Grrrl movement. This grassroots feminist campaign developed in response to the gender imbalance in ‘90s punk and rock bands, wherein women, feeling isolated by a male-dominated underground scene and mass media that ignored or misrepresented them, banded together to create their own space. One where they could commune and speak loudly about issues unique to them.

Riot Grrrls assumed the onus of supporting women artists, self-publishing community zines that spotlighted creative talents and gave women a podium to voice their discontent without having to justify it. This later evolved into hosting national conferences that went beyond music to discuss issues like sexism and body image. Think “girl power,” but with a huge middle finger. 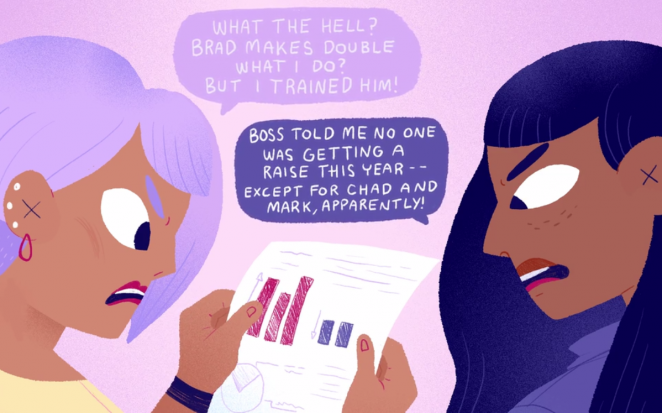 Because of this familiarity, the duo’s motivations in Lost Wage Rampage don’t need extended citations to prove their merit. While every woman’s experience is different, a lifetime of confronting sexism in its many forms informs a certain shared recognition among one another, an implicit language of understanding.

But this idea doesn’t always connect with players, said Friedoff. Several have suggested the game’s over-the-top silliness doesn’t do justice to the serious, real-world effects of the gender wage gap. If her goal is to address inequality, they propose, wouldn’t a narrative supported by facts and statistics better convey her message?

“I think we place that burden to be educational on women (and other marginalized groups) a lot,” is Friedoff’s response. “Any media we make about our experiences has to also be educational to people outside our group. Well, why? Why can’t we make media for each other, about our own experiences, that’s just playful and joyous?”

The game’s artist, Marlowe Dobbe, added that stories with female protagonists often aren’t afforded the same suspension of disbelief as those starring males. Some players will accept without question that you can scarf down food to heal near-fatal sword wounds or shoot an enemy a few dozen times before they die. If you can follow that logic, she said, “then you can enjoy a funny game about two cartoon ladies who steal a car.”

Cheap Golf Is An Ode to Inelegance