Every few years or so I see come across an article heralding in apocalyptic terms “Point-and-Click is dead!” “There’s no more audience for such titles,” “they’ve moved on,” “no one’s making them anymore,” they always read. And yet, despite this, I keep stumbling across really damn good point-and-click games. Maybe it’s not so much that the genre is dead, but that it’s secured a snug little place in the indie scene. And I’m perfectly fine with that. Here are two genre titles I’ve delighted in recently. 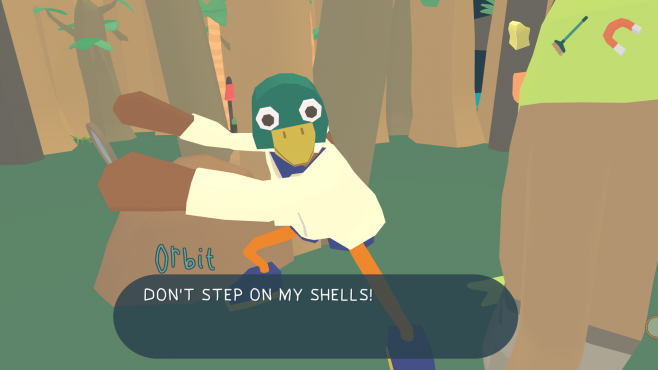 I’ve been following Grace Bruxner’s work on The Haunted Island, A Frog Detective Game for some time now, captivated early on by its simple art style and humor, and I’m happy to say the final product doesn’t disappoint.

You play as – who else – Frog Detective, the best detective your agency’s got (when Lobster Cop is busy, at least). Martin the Sloth claims there are ghosts inhabiting his island, what with all the weird noises coming out of the terrain’s many unexplained holes. Getting to the bottom of this supposed “haunting” requires some matchmaking, explosives made from everyday materials (noodles, wool, toothpaste; you know, the usual), and one killer dance party.

The whole thing is just hilarious from the moment you launch the game and see that the quality settings are just the lyrics to “Get Low” by Flo Rida. Your adventure boils down to point-and-click mechanics, but its governed by such ludicrous logic that you can’t help but follow happily along. A ghost scientist won’t give me his magnifying glass, which I need to give to another scientist to convince him I’m not a secret agent, because it’s the only way he can look at and protect the island’s minuscule shells? No problem; get him a bigger shell! I particularly liked that every plant and animal on the island had the same goofy face. That’s commitment, and I respect that.

Games take themselves entirely too seriously these days. We need titles like The Haunted Island to remind us that it’s OK for humor to be your whole shtick; making people laugh is valid in its own right. Sometimes people just want to waste an hour playing silly games (I know I do at least), to forget about the burning trash fire of daily news and all that icky adult stuff. The Haunted Island hinted at future installments of other frog detective games, and I for one am truly excited to play them. 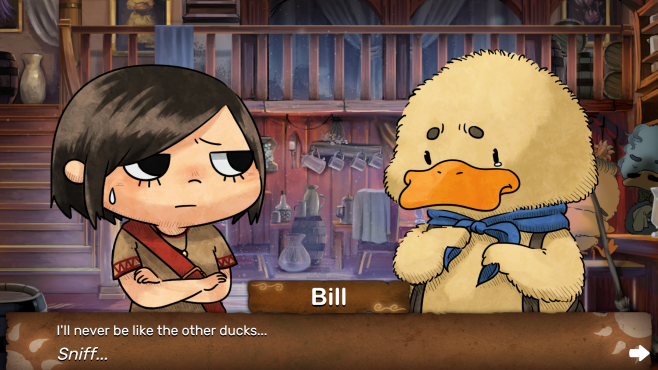 What first attracted to me to Nairi was its adorable art style, animals and humans squished down to about a fourth of their size, beautifully illustrated, and packed with character in every line. I see a lot of indie games come across my computer screen – and I mean a LOT of indie games – so I’ve gotten pretty good at sussing out at a glance which ones appeal to my interests. Nairi was such a title, and just for full disclosure, I did receive a code from HomeBear Studios to play it.

Nairi’s story begins in a pretty typical manner – you play as an eponymous rich girl secluded to her studies when suddenly her life changes forever after her parents are arrested by the royal guard, forcing her to go on the run. The story’s true heart begins after her fleeing caravan is overtaken by bandits, and while she’s their prisoner at first, she soon grows to live among them, her first time ever really leaving her home. After a while, though, she sets out to find her parents, and with the help of a fellow ex-bandit, she returns to the city.

As in most point-and-click adventures, getting anything done requires you to perform intricate tasks for other people, but Nairi threads a captivating narrative into what usually feels like a meandering to-do list. While searching for someone to smuggle her into the richer districts of the city, she discovers the remnants of an ancient civilization mysteriously wiped out and finds that her necklace allows her to communicate with them. It’s from here things start to unfold in a truly fascinating tale with talk of prophesied messengers, time travel and impending doom. All the while, the city’s residents build the tower of Shirin taller and taller, hoping to commune with the gods once they get high enough, a pursuit that early on is hinted may be their downfall.

It’s so rare that I see foreshadowing used effectively in games, indie or otherwise, and Nairi handles it masterfully, doling out crumbs of information at just the right points to indicate there’s a bigger story afoot. But none of it would be possible without Nairi’s fleshed out world, where it feels like the developers put generous thought into the structure of the game’s society and its people.

A Visual Novel To Scare You Sleepless
Previous Post