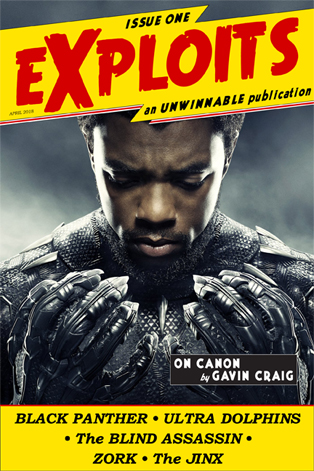 This is a reprint of the featured essay from Exploits #1. If you like what you see, grab the magazine for $2  or subscribe to never miss an issue (note: Exploits is free for subscribers of Unwinnable Monthly).

It is amusing to think sometimes about the idea of canon applied to something as frivolous as pop culture. As great deal of energy and attention is applied – at first in comic books and serialized tie-in novels like the original Star Wars Expanded Universe, but increasingly of late to a variety of film and television properties that build on shared imaginative worlds in their storytelling – to establishing What Has Happened And When as opposed to What Has Not (Even If It Was a Fun Story at the Time). What was once a discussion of what happened in the book as opposed to what happened in the movie (and which was better) has become an ongoing project of establishing (and policing) what stories matter and which, by implication, simply do not.

While my personal first point of reference for canon is the history of literature and literary education – where, incidentally, the idea of a singular canon is (rightly, in my opinion) so out of favor that it is not really even discussed in earnest – the idea of an established canon more properly draws its history from religion and, most specifically (at least in terms of the derivation of our own specific word for the idea), from the determination of what books would be included in the Christian Bible and which would be excluded.

The word canon itself comes from a word for a measuring rod, a ruler, and refers within the Catholic Church not just to the books finally included within the Bible but to church law as well as the people entrusted with the safekeeping of that law. A canon, therefore, is a ruler and a rule, a measure but also a boundary. Canon is a way of saying this is what matters. This is what is real.

The Biblical canon was established by the end of the 4th century and, while there are some differences between the accepted Catholic and Protestant Old Testaments, this canon effectively remains to this day. Pop culture canons are dramatically less stable. The Star Wars Expanded Universe continuity (renamed “Legends”) was declared out-of-canon in 2014 as Disney prepared to launch its new storytelling properties. DC Comics rebooted its continuity in 2011 with The New 52 and again in 2016 with its Rebirth storyline. At times it can seem that Marvel executes a soft relaunch every six months or so. Most of it isn’t really worth paying that much attention to.

This is in fact a feature and not a bug. Despite its religious origins, canon is a human construction and serves human purposes. Canon is an identity construction tool, whether that identity is as a proper religious subject, a properly educated citizen, or a proper fan, and the unruliness of our contemporary canon has freed us from the illusion of propriety. There is a temptation – itself a very human tendency – to look outside ourselves for canons to help us construct our identities, but the most meaningful canons are those we construct for ourselves. Every bookshelf is a canon, and sometimes canons explode.

Every month this publication will attempt to provide a particular, contingent and hopefully deeply personal canon of its own. My recommendation would be to approach the results of that effort with a pair of scissors. Keep what you find valuable and discard what is not. Figure out what matters and what is real. Be your own ruler. Make sure that your culture measures up.

The Surreal Cognitive Dissonance of Paratopic