Indie side-scrolling adventure Night in the Woods follows Mae, a twenty-year-old college dropout, as she returns to her hometown of Possum Springs and attempts to reconnect with friends and family. NITW is full of charming, complex, cutely drawn characters (GREGG RULZ OK). But twenty-year-old crocodile Beatrice “Bea” Santello is this column’s ideal candidate. She had me at “Yeah. Hi. I play drums.” She’s cool, smart, standoffish but empathetic, and goth: long black dress, black leggings, black boots, eyeliner, an ankh necklace, a predilection for darkness, and plenty of contempt.

However, my favorite of Bea’s qualities is that she’s tired.

When Bea was in high school, her mother passed away. The family’s medical costs forced Bea’s father to sell their home, and ultimately to have a breakdown. Rather than attending college, Bea remains in Possum Springs to take care of her father and the family business—a hardware store called The Ol’ Pickaxe. Her father still owns the company and is nominally in charge, but Bea manages everything and everyone. She works at the store, makes house calls, and balances the books. She handles every crisis while getting no credit for doing so.

At the end of one long workday, Mae visits Bea at the Ol’ Pickaxe. “Literally make me a coffin,” says Bea. 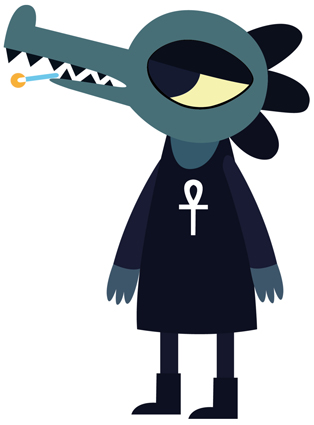 If the player chooses to pursue the friendship, Mae constantly tries to get Bea to go on adventures. But Bea prefers low-key hangs; she’s exhausted from long workdays.

Where Mae is whimsical, Bea is pragmatic. In a particularly goth scene, Mae and Bea go to a cemetery, After ghost stories come up, Mae asks, “OK, what’s scary?”

Bea replies, “Things are like monumentally screwed right now. And no one in power gives a shit. Or they’re actively making it worse. Out of spite or profit.”

“Whoa! Geez!” Mae says. “I meant like. A skeleton or something.”

In another scene, Mae invites herself over for dinner with Bea and Bea’s condescending dad. After dinner, Bea flops onto her mattress. Mae starts giving Bea shit about not standing up for herself: “You’re doing all the work and [your dad is] getting all the credit.”

Bea snaps. “Oh go to hell…A lot of time folks can’t just ‘choose’ to do whatever it is you decree to be the right thing! A lot of times people do the things they do because they can’t do anything else!” The tension between Mae and Bea comes down to Mae’s dropout status: she had what Bea wanted, and abandoned it.

Despite her understandable disdain for the term “badass” (“My mom dying was not very ‘badass.’ Me sitting here in this room is not very ‘badass’”), Bea is tough. She’s also intelligent, practical, and self-aware. No matter how much sadness and resentment she harbors, she knows why she does what she does, and doesn’t suffer fools (even when they’re cute cats). And all this manifests in a scene where Bea doesn’t leave her bed.

Why does a tired character in a videogame feel so momentous? Though indie games are changing the norms, it’s still startling to see reflections of our real selves rather than representations of our ideal selves in a videogame—with or without a crocodile avatar.

I say I’m “already” friends with Bea because I’ve known her in every place I’ve lived: young, overworked, undervalued, weighed down by financial pressures and familial obligations.

Most characters I’ve written about for Unwinnable are adventurers: a medieval swordswoman, a medieval swordsman, a cyberpunk savior, a post-apocalyptic anarchist, et cetera. Bea may be a goth crocodile, but she still lives in our world. And she has shit to do.

Bea’s heroism lies not in her ability kill dragons or zombies, but to maintain her sense of self in the face of grief, hardship, and disappointment. After work, she plays drums/computer (despite Mae’s insistence that “Those aren’t even drums!”). She drives two hours to go to parties in a college town. She cares about her friends, even when they’re assholes.

The achievement for completing Bea’s storyline is called “Best Available Friend.” But I’ll never see Bea as the “best available.” For me, she’s the only one.

Bea Santello, Night in the Woods

The Ritual Fails to Close the Circle