Imagine being thrown into an environment with zero sense of what to do or where to go, aside from some vague instructions on key actions you can perform in-game. You can traverse to various worlds, some of which are endless black voids dotted with sparse lamp posts. Others are infinite expanses of snow and forests, inhabited by pixelated creatures that are misshapen ever so slightly to be a tad unsettling. Within these worlds you may also pick up mysterious artifacts—perhaps even stumbling upon them by accident—but you don’t exactly know what they do. Or you may end up running in circles for hours until you log out from frustration.

That’s the sort of experience the cult classic, Yume Nikki, offers to its players. Its lack of traditional gameplay would have been divisive in another title, but years after its release, the game continues to fascinate players and fans. To an outsider, this appeal can seem questionable; you can’t talk to anyone else in the world, there’s no overarching plot, and there’s almost nothing of consequence to do. Yet its inscrutable landscape and the ominous atmosphere compel many to keep on exploring the worlds, even inspiring an astounding amount of fanart (one fan interpretation of Yume Nikki’s events even left me close to tears).

This is probably chalked up to Yume Nikki’s somewhat disconcerting nature. You navigate the game through a Japanese lady known only as Madotsuki, who often finds herself in surreal dreamscapes whenever she drifts into sleep. Decapitated heads that look like they were roughly etched out are common motifs in some worlds, and another has eyeballs haphazardly scattered across the ground. Certain spooky events can also be triggered, be it through pure chance or calculated effort by the player. For instance, Madotsuki may become stuck in a room with a deformed face that hums with an unnerving persistence. In another scene, the surrounding may start glitching at various pixels, much like an error resulting from a faulty SNES cartridge, with the walls’ face-like patterns steadily turning red as if blood is flowing from their orifices. Yet, if these ghastly sights are Madotsuki’s dreams, we can’t help but be pricked by the uncanny sensation that they hold a far deeper meaning, especially on a subconscious level. 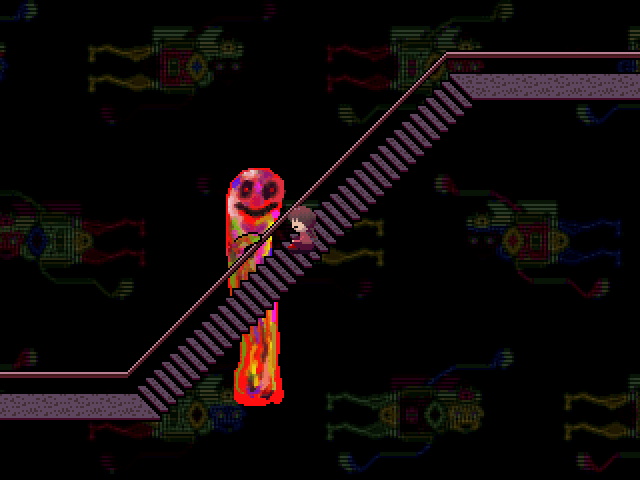 According to a research by psychologists at UC Santa Barbara and the University of British Columbia, exposure to surrealism in media, such as literature or art, can drive your brain into overdrive as it tries to make sense of these erratic ideas. “The idea is that when you’re exposed to a meaning threat––something that fundamentally does not make sense––your brain is going to respond by looking for some other kind of structure within your environment,” explained Travis Proulx, the co-author of the research and postdoctoral research at UC Santa Barbara.

In that study, two groups of students were given separate versions of novelist Franz Kafka’s “A Country Door”; one included surrealistic and disturbing events from the novel, and the other was amended such that the events made more sense and offered more closure. Eventually, the group that read the more nonsensical original uncovered more letter patterns in the story than those who went through the vanilla version. “People who read the nonsensical story checked off more letter strings––clearly they were motivated to find structure,” said Proulx.

Likewise, the strange interactions and peculiar goings-on in Yume Nikki clearly drove players to keep sleuthing for answers to Madotsuki’s frame of mind. We are all thirsting to find out what may have caused her to dream up the hideous monsters and disembodied ghosts in these surreal worlds. Plenty of plausible theories have been proposed, while communities dedicated to the game are still growing. Are these monsters the result of a traumatic experience before she shut herself from the rest of the world? Or are they simply a harrowing reflection of her already broken mind? For more than a decade, almost every character and event in Yume Nikki were subjected to intense scrutiny by fans of the game—but even with the promise of an upcoming sequel, any resolution feels doubtful. But that may just excite fans even more; the allure of going through thorough rounds of investigation and questions is undeniable, and part of Yume Nikki’s appeal is perhaps in never knowing the reality behind Madotsuki and her world.

Book Of Demons Is A Delightful Jaunt Across Hell
Previous Post

Unwinnable Listens to the Best Music of 2017 – Finale