“The first four-eyed monster that I see, I’m going to faint on camera — then I’m going to get up, and you’re going to write me out of the show.” –Edward James Olmos

Edward James Olmos, star of the beloved reboot of Battlestar Galactica that aired from 2003-2009, made this statement in a 2010 interview 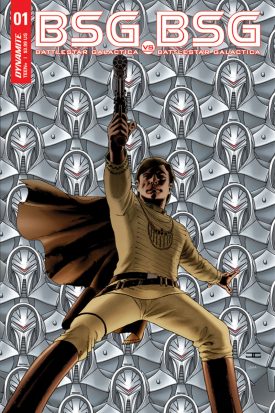 on NBC News back in 2010. He was referring to a clause in his contract that stated that he would back out of playing Commander William Adama if aliens were ever introduced into the series. Fortunately that never happened, and instead we got a science fiction show that was a powerful allegory to the world post-9/11. There really was a finite story to the second run of BSG, and trying to expand it in a Star Trek fashion like the original BSG series hoped to couldn’t work in episodes tackling weighty issues like religion, terrorism, torture, civil liberties, gender politics, genocide, prisons, the role of military and government in society and what it means to be human. On the other hand the original Battlestar Galactica was basically a TV version of Star Wars with Mormon creationism mixed in. There were aliens, robots, and colorful costumes galore. Like apples and oranges that somehow share the same name here they are, mashed up in one comic book package.

Comic book veteran Peter David is handling the writing on this series. David has written a ton of Star Trek comics and books in his career, and you can tell he loves exploring the world as well as the characters in that science fiction sandbox, not to mention iconic marathon runs on books like The Incredible Hulk, Aquaman, X-Factor and numerous Spider-Man titles. With this issue so far we’re just seeing the premise being set up, and my lack of knowledge regarding the original BSG series really hinders my appreciation of seeing folks like Commander Cain, Commander Adama, Col. Tigh and Apollo from that series simply pop up and say some stuff. An alien, some Cylons and wormholes happen, and there’s a brief appearance by one BSG reboot character. At this point it’s hard to tell where this is going, but this issue is definitely one for the O.G. fans. The premise feels more like a Star Trek mash-up comic than anything else.

Johnny Desjardins artwork is a little weird, everybody has eyes like they’ve been drinking coffee for months straight without sleep. This seems appropriate regarding the reboot BSG, but original BSG everything always seemed more like a space adventure, and not a space escape from murderous robots and Replicant clones. It may grow on me, but right now it’s a bad kind of intense. I’m not exactly sure where a sexy alien lady in a bikini fits in any BSG story, but that’s happening too. Again, it feels more like TOS Star Trek or even fantasy science fiction like Star Wars.

I’ll keep reading this out of morbid curiosity for now. Once the two worlds of BSG are merged I’ll get a better sense of where this all is going. David is a smart writer known to play with convention and theme, so I’m wondering if we’re going to see a massive tonal shift to the world of the grim and grounded BSG reboot in the next issue. At the moment though, just from reading issue one I’m getting a feeling that this was something that the title was thought up of first, and the plot is being worked on second as they go along. Maybe I’ll be proven wrong. 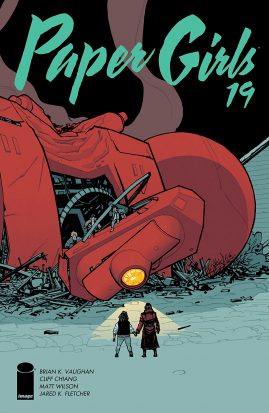 After several issues-worth of teasing, we finally get to see young Tiff and adult Tiff come face to face. Last year we and the rest of the girls got to meet the adult Erin, so here’s hoping we’ll encounter future versions of all of our protagonists, even if that means a hard reckoning with terminally ill MacKenzie’s not-so-old future self.

One thing I’ve always loved about Paper Girls is its ability to simultaneously capitalize on and toy with the current trend towards 80’s nostalgia. At its heart, it’s a kid adventure in the same vein as The Goonies, but its time travel conceits mean both the modern present and the fantastical future constantly interject in the proceedings. This not only allows for incisive commentary on today’s world to bleed in to the narrative, but keeps the book from falling into shallow imitation of hit properties from decades ago.

The art team continues to deliver some of the best, most dynamic work in the current comics landscape. I was especially struck by the color work in this issue, with browns and blues being used during dialogue-heavy scenes and vibrant reds and yellows popping up whenever the the story got a shake-up – whether that was during a giant robot fight, the introduction of adult Tiff with her red dreadlocks, or the Grand Father deploying goons bedecked in yellow hazmat suits.

The current trend of having the young protagonists interact with their older selves is a clever way to let the audience know what happens to the foursome as they grow up. Our perspective is rooted to the 80’s adolescents’ viewpoints, so when the adults deliver bad news via their own lived experiences – such as this issue’s revelation that the friends will drift apart sooner rather than later – we feel the pang as sharply the kids do.

It’s hard to reckon when you’re young that anything could break up a true-blue friendship. It’s bittersweet to see that young confusion as an adult, knowing that while this friend break-up might be the first our team faces, it almost certainly won’t be the last.

The comic begins with Koshchei and Hellboy sharing a drink in one of Hell’s watering holes. Koshchei apologizes for throwing a knife in 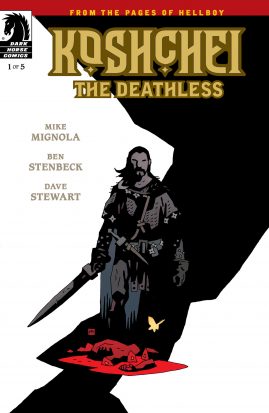 Hellboy’s back in Hellboy: Darkness Calls # 6. See, Koshchei was enslaved by the Baba Yaga and he was mighty pissed. He has less love for the one-eyed witch than Big Red so he feels bad about striking Hellboy with a knife meant for her. Hellboy shrugs it off, but he is curious how the two met.

Koshchei the Deathless # 1 is a chance for Mike Mignola to explore his riff on the Slavic folklore villain. Here, Koshchei isn’t kidnapping Marya Morevna, he’s just a really good soldier who gets beaten half to death by his fellow soldiers and later betrayed by his princess wife (who wants to marry her lover instead). He meets a dragon that restores his life and grants him immortality and this puts Koshchei on the path that will lead him to Baba Yaga and, eventually, Hellboy.

Mignola’s Koshchei is more of a wandering warrior than a serial kidnapper. He stumbles into a bargain with Baba Yaga to protect his soul. His whole life revolves around battle. Koshchei was already a brilliant fighter, but his unnaturally long life made him a monster on the battlefield.  Mignola, artist Ben Stenbeck and colorist Dave Stewart create a bleak world lit only by the fires Koshchei lights reflected in the blood he spills.

Stenbeck’s work, while very different than Mignola’s, is also reminiscent of his and Duncan Fegredo’s art. He draws a strong line and a creepy monster or two! Stenbeck’s storytelling combined with Dave Stewart’s masterful colors create a mood I haven’t felt in a Hellboy spin-off since Gabriel Ba and Fabio Moon’s BPRD: Vampire. Much like that book, this feels less like backstory and more like another tale set in Mike Mignola’s stygian playground.

Koshchei the Deathless # 1 is the kind of comic I’d pass on to anyone who likes monsters and folklore. Koshchei may not be as familiar to some as Hecate or Rasputin, but he’s a tragic protagonist right up there with Hellboy and Mignola and Christopher Golden’s Lord Baltimore. I’m looking forward to seeing what Mignola and Stenbeck have in store for the next 5 issues of this miniseries.