The Farming Simulator series isn’t something I’ve been staying on top of with regularity, but I’m not new to it either. While I can’t say I care one way or the other about what tractor brands are included or which geographical locations I’m allowed to set up shop in, I do find the plodding and methodical (read: slow and dull) task of growing digital crops to be quite pleasant. The same holds true for Farming Simulator: Nintendo Switch Edition, naturally.

This particular version is merely Farming Simulator 17 on the Switch (as opposed to the PS4, XboxOne and PC editions that came out in 2016), but that’s okay because it means I get to enjoy my virtual farming on a TV or on the go without missing a beat – the perk of Nintendo’s console that everyone was skeptical about but turned out to be kind of awesome just like the DS. So, if you’ve played and enjoyed (or hated, really) any of the Farming Simulator games, especially ’17, then you don’t really need to read more of this. It’s that game, plus the option of portability.

From a less familiar standpoint, it’s worth knowing that this game isn’t exciting. At all. The entire point is to plant crops, harvest crops, sell crops and buy better equipment so you can repeat the cycle with better stuff. You can delve into the options and mess with things like how fast time passes, how quickly crops grow, whether or not crops can wither and die, so if you want to speed things up a bit, you can. Conversely, if you want to slow everything down to realtime – or almost realtime – you can do that, too. 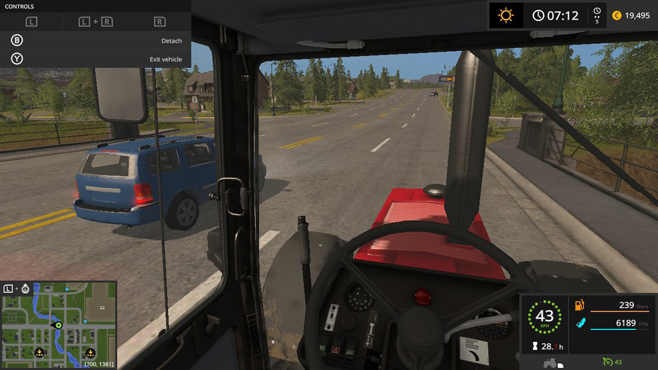 My personal approach is usually to start a procession of vehicles going, each autonomously controlled by hired hands, so that I can harvest, till and re-seed a field in short order. It keeps things running smoothly, but it gets a bit dull to just haul goods off to market over and over again while the fields are being tended. Which brings me to my one big gripe about Farming Simulator: Nintendo Switch Edition (and all of the console/PC games, really): you can’t hire people to haul goods for you. It sounds like a frivolous complaint, I know, but the mobile versions implemented this feature and it’s spoiled me. Driving wheat and whatnot across the map, then driving back to the farm, is perhaps the most boring task you could perform and that’s saying a lot. Being able to automate that – especially the return trip – was fantastic. Here, you have to do it all manually and I can’t help but wonder why is this option only available in the mobile versions?

What helped to keep me interested after I got settled into my farming rhythm (and avoided hauling goods like a super boring plague) were the challenges. Or tasks. Or whatever their proper name is. There are a bunch of fields on the map that you can buy in order to expand your farming empire, but rather than simply buying those fields you can take on jobs from whoever owns that field. I’m assuming. I hope I haven’t been completing random tasks for total strangers who don’t actually own the land I’m working on. That would be weird. Anyway, these tasks help to break up the monotony. Granted, it’s still stuff like harvesting crops, spreading fertilizer and so on, but you can do it while your automated workers continue to tend to your own fields. 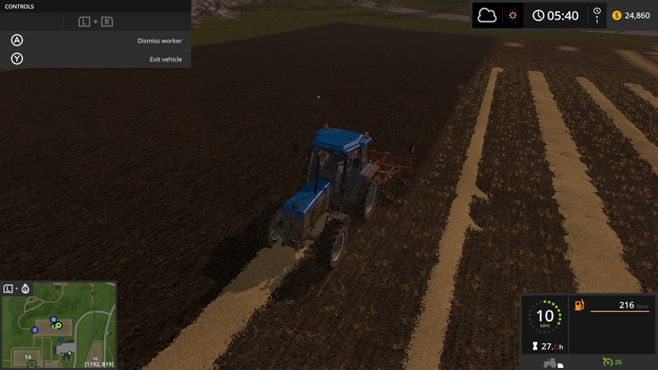 Aside from just giving you something to do, these odd jobs are a big help because they earn you extra money as well as give you a chance to perform tasks or use equipment that you might not be able to yet. It’s already worth it for the money and break in the tedium, but being able to preview stuff is also great since you’ll be able to get a feel for what you might want to save up for next.

That’s Farming Simulator: Switch Edition. It’s a game that should be boring, and kind of is, but it’s the right kind of boring if you’re into that sort of thing. As I said, I do wish that I didn’t have to ferry goods around (and I’ll never understand why the mobile games address this but not the console/PC versions), and without the ability to perform odd jobs it can get quite tedious, but once you find your groove it can also be a pleasant way to relax.

Rob Rich is a guy who’s loved video games since the 80s, and has had the good fortune of being able to write about them from time to time for sites like 148Apps, Gamezebo, Gameosity, and Fanbolt. You can catch his occasional rants on Twitter at @RobsteinOne.