The Girl From the Other Side’s title has often risked sounding like a misnomer. While there has never been any mistaking Shiva’s importance to the story, too often she has felt like a device to develop Teacher, who with his running and tortured internal monologue and his learned voice has so often attracted the narrative’s focus and provided a point to view it from that he seemed to be the true protagonist. Nearly all of the story has been driven by his actions or explained from his view; his fears, his angers, his weakness, his presence are such dominant elements that they have even defined the very mood of the story. Shiva, by contrast, has near always played the part of a receding figure, either the MacGuffin hunted by various factions to realize ambiguous ends or as an allegorical figure meant to hammer home the most obvious of the story’s themes. 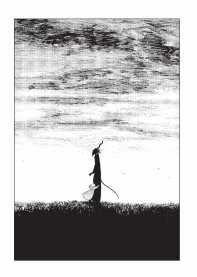 But then, what could she do besides recede when placed next to these dominant figures? Shiva is a child, after all, and an especially shy one eking out a lonely existence in an especially inhospitable world. Her methods of expression are far more limited than those available to the wise and worldly Teacher, while her frailty leaves her no choice but to shrink before the looming threat of the Others and the faceless, paranoid lunatics who huddle at the heart of the Inside. She has no real words and no frame of reference for her feelings beyond the stories and lessons she’s inherited from her aunt and from Teacher, and so is forced to convey them through her limited vocabulary or through unconscious choices in body language that that betrays these barely-known anxieties and desires.

If this has often had the effect of reducing Shiva it has also, paradoxically, made her an essential element of the story’s most powerful – most essential – moments. The second volume’s brilliance hinged almost entirely on the way Shiva’s gaze lingered too long on her hands after Teacher explained to her once again why he could never hold her, why he could never grant her the connection she so clearly craved. Unable to communicate her anxieties and afraid of expressing her desire to simply touch the only parental figure in her life, denied the simple but essential joy of contact, Shiva was forced into a moment of desperate, quiet inertia that afforded the reader their first real moment of intimacy with the character, a moment that proved deeply uncomfortable for how much it did to reveal Shiva paradoxically not as a silent cipher, like the silence of the moment might suggest, but as a girl plagued with an abiding loneliness she was only starting to make sense of.

The third volume’s brilliance, then, rests with Nagabe’s decision to explore this isolation by separating Shiva entirely from her beloved Teacher. Without his kindly assurances, without his wisdom, without his mediating 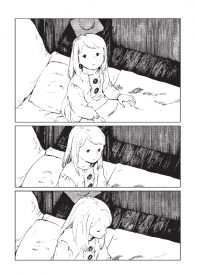 influence, Shiva is well and truly alone; without him to speak for her and interpret her emotions, without him to help her make sense of the world, it becomes inescapably clear how fragile and alone the child is. More importantly, it finally allows readers to view the world from her limited perspective, a decision that hammers home exactly how empty this existence is. It’s a brilliant narrative stroke that makes clear emotions that had until now only been implied, one that allows Shiva to fully come into her own as the realized human that events and presentation might have denied she was. Her aunt’s presence does not dampen the effect so much as exacerbate it, for the young girl understands if only subtly that something about their reunion is too convenient. Rather than push her farther away, though, this uncertainty only seems to drive Shiva the more quickly into her aunt’s arms in a moment of silent longing that seems set to repeat the one that marked the height of the second volume before finally reversing it.

For, when asked by her aunt if she had touched ever touched an Outsider  – when given the chance for human contact at the cost of a simple lie she knows might very well endanger her aunt – Shiva finds herself lingering in a series of silent panels that speak for days about her desperate desire for love, and to how heavily she weighs this basic human desire against a moral system she understands only barely yet fears deeply. In the end, she can only allow herself another lingering silence before squeaking out a lie that disturbs her so badly it will come back to haunt her in a subsequent series of similarly silent panels, in a vivid nightmare, in a flock of avian Others, in raving mobs, but, most tellingly, in her aunt’s grotesque new status as an Other every bit as inaccessible and distant as Teacher was. It’s a twist of a darkly poetic punishment worthy of the best fables and that plays right into those fears of Shiva’s we’ve become so familiar with. 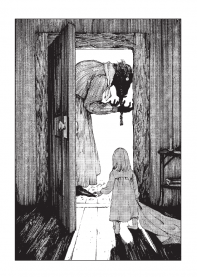 It’s not that Teacher himself has been forgotten in all this time, or that his arc has stalled. His loneliness in the face of Shiva’s departure, too, has forced him to reckon with an attendant despair so great that he is willing to strike a bargain with the same Others he has so long insisted he bears no relation to in order to retrieve her. But where Shiva’s moment is dwelt upon, allowed to speak for itself, Teacher’s is understated and quickly developed into plot, abandoned until the end of the volume to reassert itself, as if Nagabe feared that granting even this obvious parallel between the two protagonist too much focus might allow it to overshadow the time – the humanity – Shiva had finally been granted.

Until now The Girl from the Other Side has showcased an immaculate understanding of atmosphere, of tone, of theme, of art, but with its third volume artist and author Nagabe demonstrates even a developed understanding of the power of structure and how it might be used to best accentuate character, an element she has until now played so subtly it might be understandably mistaken for slight. How she plans to develop it from here is impossible to guess, but the dread and mystery that permeate The Girl from the Other Side are so remarkable that there seems little point in doubting; it remains poised to continue as one of the most fascinating works of graphic fiction in recent memory.

What the Hell Are the GROW Games?
Previous Post