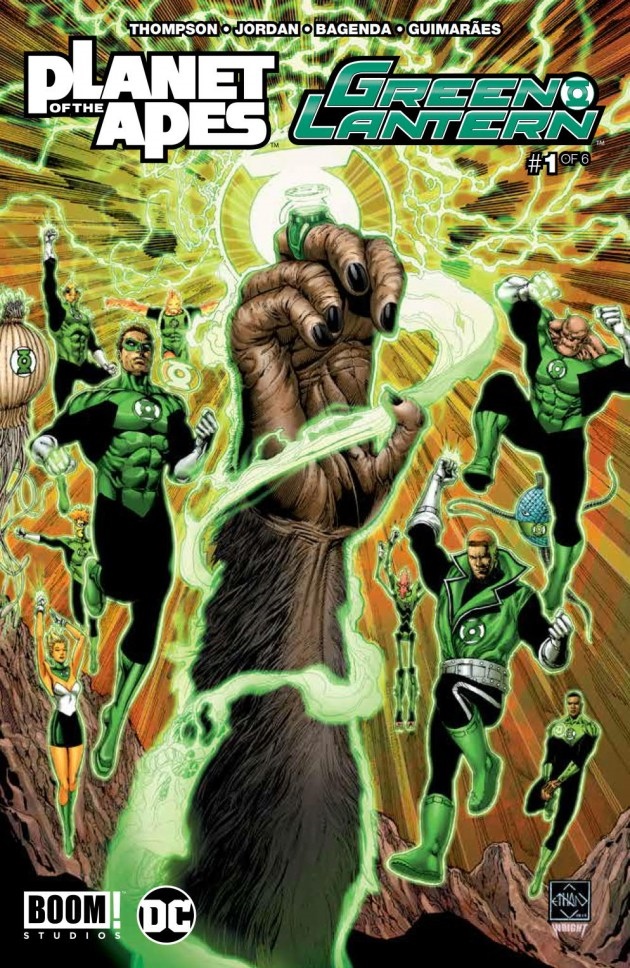 Planet of the Apes/Green Lantern #1

While recently reading the trade for the Planet of the Apes and Star Trek crossover from a few years back I thought to myself how fun and easy it is mashing up certain established franchises with the world of Cornelius, Dr. Zira, Dr. Zaius and Colonel Taylor. It’s a crazy bleak apocalyptic world with talking apes riding horses, why wouldn’t it work!? When I saw the first issue of this series on the racks last week I had to pick it up with what little spare change that I have. Judging from this first issue we could be in for quite the cosmic ride.

The plot is that Sinestro acquires a ring that’s able to harness the powers of all colors of the emotional spectrum. He sends the ring into the timestream to Earth, and it is found by Cornelius. Hal Jordan gets wind of this activity and hunts Sinestro down. They both end up falling through a time portal, and on the Planet of the Apes by the end of the issue. Oh, and Cornelius acquires this special ring and blows away a mutant in the Forbidden Zone, which leads to the other big brain telepathic and telekinetic mutants worshipping him.

There’s a scene in this issue where Hal Jordan washes up on the shore cursing in a very familiar Charlton Heston kind of way. What’s brilliant is that Colonel Taylor and Hal Jordan share a lot of similarities, being pilots with military backgrounds and having problematic relations with women. Meanwhile the world of the Apes provides a new setting for the Lantern groups to do battle. Or for Sinestro and Jordan to try to reclaim the universal ring for their particular spectrum group.

Props to Robbie Thompson for condensing the rich backgrounds of the principal characters enough that it doesn’t bog down the introductory pace of this issue. We get an idea of the hierarchy and landscape of the Ape World, and the current status of the Lanterns. I haven’t been following GL for a while, so it’s good to see that things are still pretty much where I left off after Geoff Johns revitalized the franchise in the ‘00s.

The artwork by Barnaby Bagenda is a treat. It recalls veteran Green Lantern artist (and cover artist of this issue) Ethan Van Scriver somewhat, which translate interestingly when the action shifts to the planet of the apes. There are also times when the art as a whole resembles more of an animated style, which makes me wish for a Green Lantern and Planet of the Apes animated movie. My only worry is that the apes won’t be drawn with enough nuance so that it’s easy to distinguish among them in group scenes.

This is a fun little excursion, kind of a What If/Elseworlds tale. I’m curious to see where this creative team will take the story, and how the will weave the plot through both franchise worlds. I’m also really curious if the plot of this series will yet again echo the plot of the first few Apes films, with that ultimate bummer of an atomic ending. Given all the epic nonsense that has arisen during the decade of ring wars over in the Green Lantern books, I’m sure the doomed fate of this hopeless Earth future will top it in the emotional weight department. The films in the Planet of the Apes series have always managed to create heavy stakes with so little, especially compared to a comic series where everyone is armed with weapons powered by imagination and emotion. 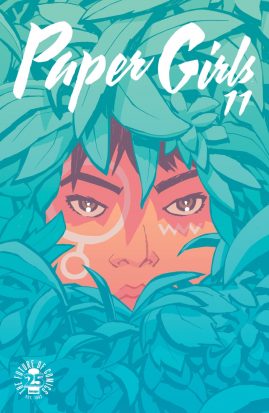 After a hiatus, Paper Girls is back with a new arc and we still don’t know what the heck is going on. You know what, though? I don’t think I care. I’m pretty content to be as much in the dark as the main characters themselves, especially since their ability to hunker down and try to figure things out is the driving force behind the narrative.Now that our girls have been reunited with the missing KJ, Vaughan takes time to focus on her and the relationships between each of the core four newspaper deliverers. This serves new and old readers alike – old-timers get deeper insight into KJ’s past and present, and newbies get the benefit of having the group dynamic reestablished.An absolutely stunning (and terrifying) dream-sequence opens the issue, with the tell that it’s not quite reality coming from Matt Wilson’s pastel color palette. The slightly washed-out color in these panels gives this sequence the feel of an old photograph. That is, until the sky turns a fiery orange. After KJ’s dream is over, Wilson returns the book’s palette to the blues and greens of a jungle at night – minus a very pretty scene around a campfire, which helps us transition between color schemes by letting the light play on the protagonists’ faces for a few pages. Between this book and The Wicked + The Divine, I think it’s safe to say I’m officially a Matt Wilson fangirl.

Cliff Chiang’s art is as strong as ever, with his knack for super expressive faces doing some heavy lifting in the scenes with a newcomer who doesn’t speak the language. I don’t have any idea what this new girl is saying, but I’m pretty sure she’s alright, even if our fearsome foursome isn’t.

By the end of the issue, we know when we are and, due to the introduction of yet another new character, that there’s still hope of a way out. Brian K. Vaughan is much stingier when doling out other story secrets, but as long as we keep focusing on Erin, Tiff, Mac, KJ, and their scrappy teamwork, I’m more than willing to roll with it.

Why I’m Okay With Never Winning