I didn’t get to read any comics this past week because I was at New York Comic Con. I did pick up a bunch of cool comics that I will write about in the near future. I finally have a physical copy of Kyle Starks’ Sexcastle. I snagged the Bob Haney and Dick Dillin classic, Saga of the Super Sons for cheap.  I also snagged the NYCC convention exclusives of Kid Lobotomy # 1, The Fighting American # 1 and Duck Tales # 1. 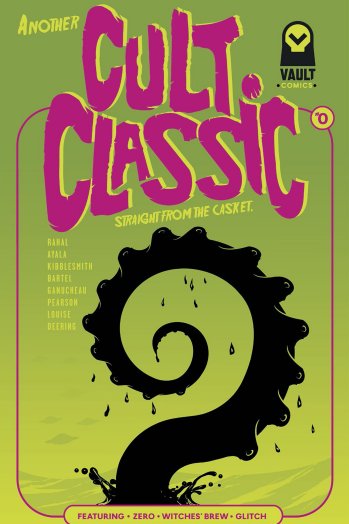 The one issue I got to read was Vault Comics’ Cult Classic ashcan. It’s a creator-owned shared horror comics universe. The stories in the book blend horror and humor and feature the work of some topnotch work by creators like Rahal, Vita Ayala, Daniel Kibblesmith, Emily Pearson, Jen Bartel and Paulina Ganucheau. Ayala and Bartel and Kibblesmith and Ganucheau both tell tales involving the same haunted house during two different time periods. It’s a fun sneak peek at what’s coming and I’m looking forward to reading more when Cult Classic launches in February.

NYCC was a lot of fun this year. I got some cool sketches, caught up with some great folks for all too brief periods of time and bought some neat little knicknacks. I take a physical beating every year but hot damn, did I have a lot of fun and I can’t wait until next October. 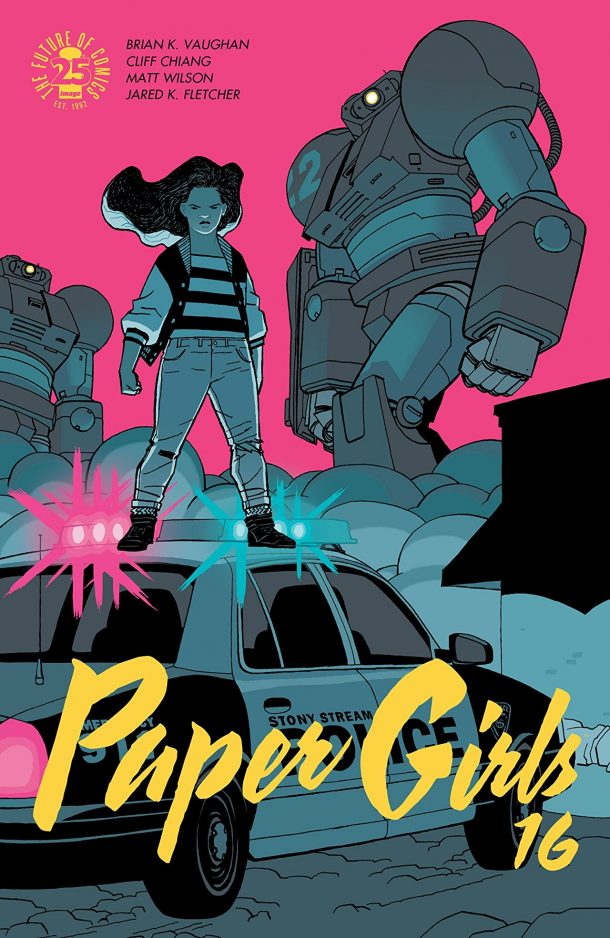 Paper Girls is back, y’all. Thankfully, all four of our time travelers made it safely out of the Pleistocene epoch, though they’ve once again been split up. This time, Tiff’s the odd woman out, finding herself being ushered into the back of squad car almost as soon as she arrives in the year 2000.

That’s right – after tackling 1988, 2016, the Pleistocene epoch, and whenever the heck the Grand Father and the Prioress (nice to meet ya!) are, we’re whisked back to Y2K for this new arc. Oddly, it seems to be a different Y2K than the one I remember, as this one has the girls dealing with the immediate aftermath of what seems to be a very real Y2K bug. Glad to see a Delia’s store still exists, though! (Even if we all know the nineties was the true era of the lifestyle brand.)

The pacing for this issue is nice and brisk, which is majorly appreciated. As much as I loved cave-girl Wari – and I really loved her – I felt like parts of the last arc were a bit of a slog, with more questions being asked than answers being revealed, and eventually I got to a point where I saved up two or three issues to read at once just to avoid frustration. I’m all for leisurely character-building, but I still need to feel like there’s some forward momentum in the main plot, and it can’t all come in the last cliffhanger-y splash page of an issue. Judging from this chapter, it looks like Vaughan has made a nice adjustment on that front.

We’re also briefly introduced to two new major characters: the Prioress, who seems to be a high-ranking religious(?) official in the Grand Father’s era, and Charlotte “Chuck” Spachefski, a cartoonist in the year 2000 (and beyond) who’s leaving secret codes in her daily comic strips and is already expecting time travelers by the time the gang arrives at her front door. She also seems to be a slightly dotty older lady, so I’m firmly #teamcharlotte and can’t wait to get to know her better. To that end, the Prioress seems to have a decent sense of humor, too.

I’m so glad Paper Girls is back from hiatus. I can’t wait to see the new shenanigans our girls will get into, and how many new mysteries they’ll uncover along the way. Tiff, Erin, Mac and Kaje are well-developed and easy to root for, no matter what the future or past decides to throw at them. In this day and age, it’s nice to have a monthly dose of kid adventure to look forward to.