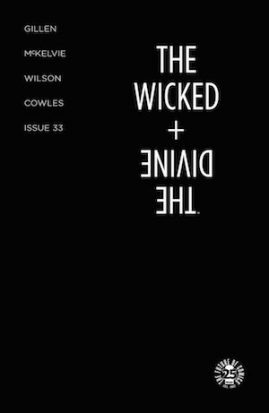 It’s been three weeks since the WicDiv team wrapped up the second part of their Imperial Phase arc, and the final issue was a doozy. Fair warning, this piece will contain spoilers for the entire series up until this point. Duh.

There’s not one, not two, but three shocking twists to the story in this single issue. One: the eternal shithead Woden turns out not to be Jon Blake, son of the middle-aged, Pantheon-obsessed milquetoast David Blake (first introduced all the way back in issue #4), but sad-sack poseur David Blake himself. Two: cute, sad little Minerva is maybe a bad ‘un, going so far as to refer to herself as Ananke. Three, and this where my head (heh) was well and truly spinning: the decapitated heads of the three gods murdered by Ananke – Lucifer, Inana, and Tara – are being stored on some kind of ceremonial altar somewhere in what looks to be the basement of Valhalla, patiently awaiting the arrival of a fourth god-noggin to complete whatever ceremony Ananke and/or Minerva have cooking up to stop the Great Darkness. Oh, and they can also talk to each other.

I was so gobsmacked by the last two twists that I decided to re-read most of the Imperial Phase arc, starting with Ananke’s death at the hands of Laura. Did Woden’s machine actually switch the bodies of Ananke and Minerva, like some kind of hellish Freaky Friday? Judging by how Ananke-ish Ananke behaves right up until the moment of her death, I’d say no, though I can’t ignore Minerva has recently undergone a bit of personality change (although witnessing one’s parents die in an explosion of blood and viscera will certainly have that effect on a person).

I guess I’ll have to wait four months (eeeeeeeeaaaaaagggghhhhh!) for the series to return to find out exactly what Minerva meant and exactly how the heads of the “deceased” gods are still hanging around chatting several months after they’ve each died.

That first twist, though, that’s some even more satisfyingly meaty stuff. As soon as I saw David Blake standing unmasked in his secret room, explaining that the second Woden-esque figure imprisoned there was his son Jon Blake, my mind zipped through all the times he or Ananke insinuated his god-powers were somehow mysteriously apart from him. Jon is the Blake who’s legitimately of the Pantheon, but he’s Mimir, a Norse god of knowledge whose severed head is carried around by Odin in order to act as advisor.

Suddenly Woden’s tedious speeches about fathers and sons, patriarchy and power – as well as his willful adoption of “Woden” as moniker – had deeper meaning than before. I also went back to read the Woden-centric issue #14, where he first talks all that patriarchy shit to Cassandra. I realized we saw a full headshot of Woden and Mimir in conversation at the very end of it, a moment I had almost immediately forgotten due to not understanding at all what it was that I was looking at. Bravo to the WicDiv team for this one. Their long game is legit.

I’ve struggled with my hate-and-relate relationship with Woden since the series started, and looking back now over his major character beats, he seems to be going through the same struggle himself. In this issue alone he says his son stole his life – thus he was entitled to take Jon’s public-facing godhood for himself – but he also makes a case that he’s doing it for Jon’s protection – making a deal with Ananke that while Mimir’s exceptional brain could be picked at her will, he wouldn’t be sacrificed for her plan to defeat the Great Darkness. The truth likely lies somewhere in between, aligning Woden’s situation nicely with Persephone’s assertion that she’s neither and both a demon and just a fucked up girl, which is underscored in this issue by a long and heartfelt conversation between she and Cass in Mimir’s cell.

This an exciting and anxious place to leave the Pantheon as they head into their last year or so of existence. I can’t wait to see what fates await these increasingly complex characters, and which of them – if any – can be redeemed.