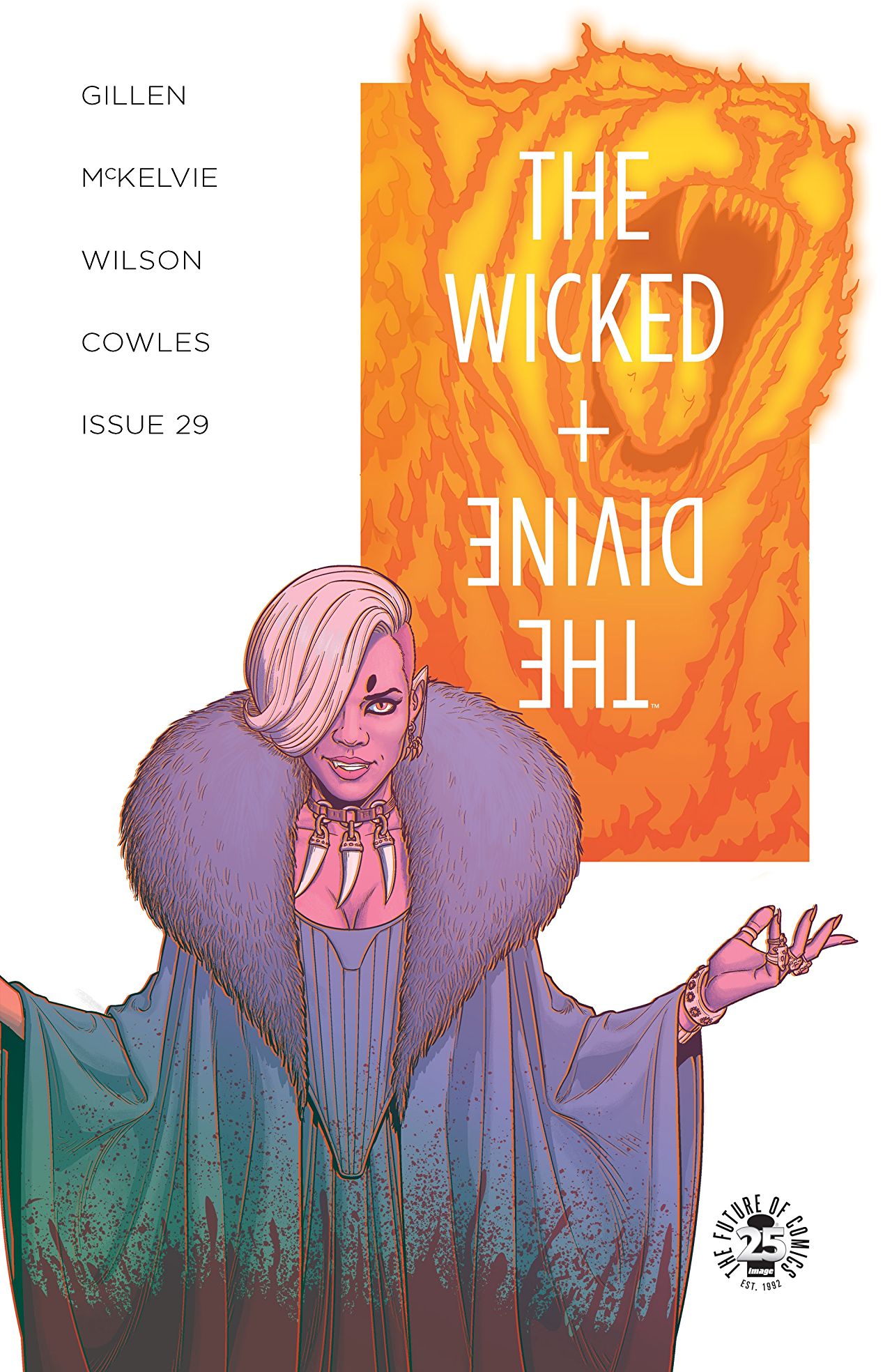 As is permanently printed above each of WicDiv‘s letters columns, once again, we return. Issue #29 is the beginning of the Imperial Phase II arc, and picks up the day after the orgy-slaughter (by way of Sakhmet) that closed out the first part of Imperial Phase. Persephone’s head is reeling, she’s feeling ill, and for one still-buzzed second, she thinks she’s waking up next to dearly departed Luci.

Alas, Persy’s hookup is merely an eager wannabe, a poor woman’s facsimile, and that realization hits sharp and quick, like any hangover. The whole issue reads a bit like a hangover, with Persephone reveling in memories of being just-another-fan-girl Laura, then spending her day trying to piece together what the hell’s happened and where the hell her murderous girlfriend’s disappeared to. I’m sure it’s no accident that Laura’s reminiscence focuses on her two lovers, Baal and Sakhmet, and Matt Wilson continues to do excellent color work with this sequence – Baal runs cold and Sakhmet hot, hot, hot.

The story’s call for Persephone to check in with all her compatriots nicely works to catch us up on what everyone is working on. The Great Darkness is a-comin’ and we’ve got three camps in the Pantheon, remember, with some choosing to study Ananke’s god-sacrificing machine as a means to stop it, some training to battle the Great Darkness full-out, and some, like Persephone and Sakhmet, choosing anarchy, self-destructive and otherwise.

The most exciting moments happen in the inky black underground (well done, Wilson, again), where the concurrent tensions of the Persephone/Baphomet affair and the possibility of The Morrigan’s abuse of her paramour because of it come to a head. In a defensive moment of self-protection and, perhaps, projection, The Morrigan turns Cassandra’s accusation that she dragged Baph into godhood without a proper warning back onto Cass herself, asking whether or not she did the same to her two crew members when becoming Urdr of the Norns. Cass is one of my ultimate favs, but… touché. It will be interesting to see the fallout of this at the big Norns concert that’s still to come, since we don’t have much time to explore how Verdandi and Skuld react (ps: guess who has two thumbs and had to look those names up on the wiki?), though even half hidden in shadow, McKelvie has their eyes give us an idea of their immediate feelings.

A plea: having been and still being involved in creative endeavors where I’m one cog in a great machine, can we get a one-off segment with just the two other Norns? How do they feel about all this? I’d slaughter an orgy just to get a real heart-to-heart with either of them. If they can’t be in a room without Cass also being there, that’s fine, she can come too. But ideally we’d be looking at a Rosencrantz and Guildenstern are Dead type of sitch. Gillen and McKelvie? Can we do another magazine issue or something? Brilliant fanfiction writers of Tumblr and beyond? Bueller?

Overall, this is a good catch-up issue which delivers deep and compelling character beats. I can see some readers complaining of a lack of action, but judging by the last panels, we’ll see it soon enough. 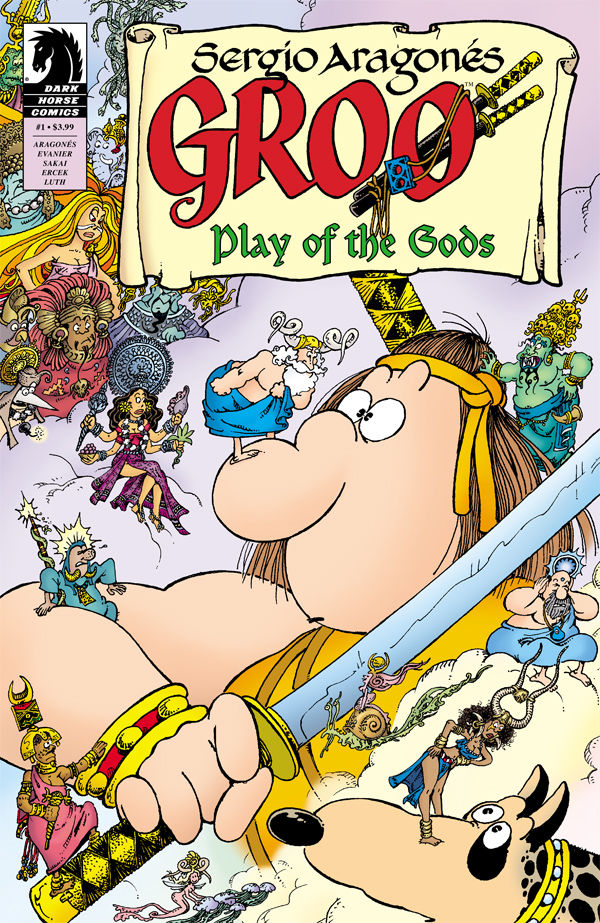 Groo: Play of the Gods #1 is the first issue of the latest Groo miniseries from comic legend Sergio Aragonés, who has brought us the moronic barbarian’s adventures since 1982. Once again Groo and his faithful dog Rufferto wander into an adventure featuring much higher stakes than the cheese dip Groo craves. We learn from this issue that government, clergy, citizenry and ultimately the affairs of the Gods themselves are all affected by the often dim-witted actions of the cartoonish barbarian Groo.

It’s strange to be comparing Castlevania and Groo, but I’m going to give it a shot. Recently Netflix aired four episodes of a new anime-style adaptation of the beloved Castlevania video game series. Much of the first story arc of that series deals with a mostly drunk or hungover warrior helping a city defend itself against a massive supernatural threat, while also first defending the people against an oppressive religious regime. When reading the first issue of Play of the Gods I couldn’t help but think of that, as much of this issue addresses how religion is a potent weapon utilized by oppressive regimes to subjugate the people, and the impaired heroes who help the people defend against that regime.

While this seems like a subject that’s a little too serious for a Groo comic it actually works. Mark Evanier and Sergio Aragonés keep the “Wanderer” element of “Groo the Wanderer” here, allowing for our hero to pass through the machinations of evil people unharmed. Throughout the issue he maintains his innocent stupidity, while Rufferto understands something is up and gently nudges his master away from his doom over and over again. In many ways Rufferto is a companion and almost equal to Groo due to the fact that he has more common sense and intelligence.The creative team delivers the goods on this series. In addition to Aragones and veteran writer Mark Evanier John Ercek and Tom Luth provide wonderful bright and popping colors to every page, a wonderful compliment to Aragoné’s pudgy noodly-limbed figures. The crisp details of the art as a whole is really a treat, right down to the details on the robes and accoutrements that the clergy wear. The lettering is even handled by comic book legend Stan Sakai!

If you love Groo, Rufferto and their misadventures you’ll love this. If you’re interested in cartooning and the ongoing work of Sergio Aragonés you’ll love this. If you’re looking for a fun self-contained adventure that doesn’t require a lifetime of background information you’ll love this. It’s a rare thing to be able to jump into a new series featuring characters that have existed for many decades. The subject matter of this series is quite timely, not only because of misuse of a rotten religion by the oppressive government but also the xenophobic tendencies of the same government torturing and exiling outsiders from other countries due to this rotten religion telling them that anyone that looks different with different beliefs are the enemy. I’m laughing at Groo being wacky, but boy oh boy is this plot a little too relevant to what’s going on in our reality.Will Groo turn things around so that the citizens can be free of the oppressive regime that’s trying to oppress them with religion? What will he not discover about the world while adventuring around with the pirates and mercenaries he is teamed up with at the end of the issue? Will the Gods ever get along? Most importantly will he find that cheese dip? I’m excited to find out!