When Richard Dawkins first coined the term “meme” in 1976, the Internet as we now know it was nothing more than a gleam in some software engineer’s eye and we were still decades away from meeting the Grumpy Cats and Rickrolls that populate our news feeds. To Dawkins, a meme is a slice of culture or information that spreads from person to person. These could be anything from famous quotations to catchy theme songs to enduring philosophical constructs like the idea of God.

Memes are nothing new, but the advent of the Internet has made it much easier for memes to spread. We now find ourselves swimming in a sea of information that surrounds us at all times. Do we need to be more cautious of the creatures that swim amongst us? This is the question director Irene Taylor Brodsky asks in the documentary Beware the Slenderman (2016).

Beware the Slenderman follows the case of Morgan Geyser and Anissa Weier, twelve-year-old girls who stabbed their friend Payton Leutner on the orders of their spooky imaginary friend, Slender. The legend of Slender describes a tall, thin, faceless man in a dapper suit who stalks children. He was born on the Internet on a “creepypasta” message board where horror fans trade short stories like kids at summer camp swapping tales around a bonfire. He quickly migrated to more fruitful hunting grounds: YouTube, Instagram, videogame adaptations, web comics. As his story spread, it mutated, subtly shifting as it leapt from host to host like a virus. In fact, Dawkins himself likened memes to viruses, infusing them with a strange life of their own, outside of us. We’ve all heard the (itself memetic) slogan: “Information wants to be free,” but in Dawkins’s formulation, information also wants to be shared. It wants to infect as many minds as possible, regardless of how it might adversely affect those it touches. 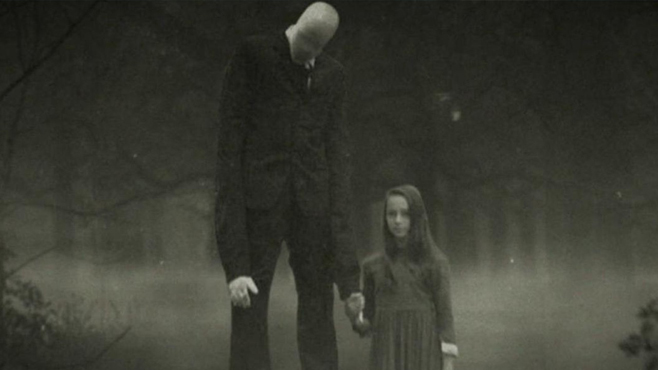 Geyser and Weier seemingly think of Slender as real; they matter-of-factly describe to police how he will kill them and their families if they don’t appease him by offering him their friend as a sacrifice. They seem somewhat sad about the idea, but they are resigned to it. It is easy to dismiss their belief as childish fantasy or as a manifestation of mental illness (and certainly both were factors in the crime). Yet in some ways, they are right: he is real in the sense that the virtual world that spawned him has become more real than reality for many of us, particularly those who grew up with the Internet as a part of their lives. Think about how we sculpt our experiences to make them more palatable to our “friends” on social media, how we spend our time looking for selfie opportunities, dreaming of the images of ourselves that we will be able to construct online rather than being fully present in the moment. We have become meme-generating machines, more invested in creating sharable snippets of content and hoping that they will survive and thrive in the meme pool than in nurturing our physical bodies, minds and hearts.

The lives of these two young acolytes of the Slenderman have been pretty thoroughly ruined by the horrors they’ve been through, the horrors they created. But they continue to thrive as memes themselves, becoming integrated into Slender mythology, becoming the subjects of fan art and written into new Slender stories. Perhaps they might say that their sacrifice was successful, that they were able to shed their past selves and live in Slender’s world.

Megan Condis is an Assistant Professor of English at Stephen F. Austin State University. Her book project, Gaming Masculinity: Trolls, Fake Geeks, and the Gendered Battle for Online Culture, is under contract with the University of Iowa Press.

The Comforts of Playing With Food in Nour