Next: A few beats of blackness, and then a whispered secret from long ago we’ll never get to hear.

For as long as I’ve known Twin Peaks, I’ve considered the Season 2 finale – that is, the final episode of the original run, which aired more than a quarter century ago – to be the most mindbendingly awesome and maddeningly perfect ending ever put to film. It’s now firmly in second place.

In the days since it’s aired, I’ve heard some fascinating thoughts about the final night of Twin Peaks Season 3. There was Jeff Jensen’s breakdown of what The Fireman says to Cooper in the Season 3 opener – that Richard and Linda and 430 and two birds with one stone aren’t signposts to viewers, not clues to tip off Cooper that he’s on the right track, not a Season 3 version of the smiling bag as we might have thought, but evidence of being stuck in a fruitless dream.

Me, I went down a different rabbit hole in the hours after I watched the finale, taking a step back, grasping on to something familiar – perhaps largely as a defense mechanism against the crushing force of trauma and defeat in that final note, but poignant nonetheless: Twin Peaks Season 3 did fan service but also flipped the fucking bird to fan service. Just as the original run lampooned TV melodramas,  Season 3 raked revivals and nostalgia over the coals. 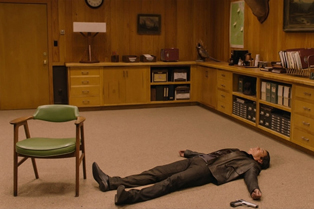 What’s dead is dead,  Season 3 reminds us. No matter how noble, or how true, no matter how minor or hidden the flaws we all have, no hero can change that. Trying to bring Laura Palmer back to life, if not a totally futile effort, is fraught with so much peril it might tear the fabric of the universe, leaving behind a nightmare that never ends.

But what had my pulse pounding, at least until a series of fitful dreams broke through my self-willed academic detachment, was what the finale said about returning to Twin Peaks itself – not to the fictional town, but to the television show.

Why are Cooper’s final words in the series, “What year is this?”

The answer, which we never get, never will get, will be theorized a million times over. And I’ll read as many of those theories as I can. But I don’t think the answer is the point. It’s the asking of the question that matters. Is it future or is it past?

When you consider the woman who opens the door at the Palmer house in that final sequence is not an actress, but, in fact, the actual owner of the real-world Palmer house, it slams home one undeniable truth: For us, at least – and possibly for Cooper, too  this year is 2017, and in an era of reboots and remakes and sequels and intense longing for a romanticized past – not only on our screens but in our political rhetoric – Twin Peaks Season 3 crashed the party.

But “Twin Peaks” doesn’t just hop on bandwagons. It doesn’t follow. It leads.

When I sat down to watch the two-part finale, I was convinced Showtime had made a mistake. Surely they had labeled the episodes out of order. Part 17, in just the first half, gives nearly everything you might reasonably expect from David Lynch and Mark Frost as far as closure. A final battle with Bob and the evil Mr. C., surrounded by characters, new and old, in the safe and familiar surroundings of the Twin Peaks Sheriffs Department.

What’s left, I thought? At one point, I paused the stream and went back to the menu of the Showtime app, checking if I had indeed selected 17, and not 18 by accident. 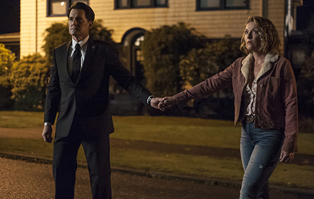 But it was Part 17. And if viewers only came to Twin Peaks Season 3 to find closure – and I neither fully understand nor sympathize with those viewers – here was the best they’d get. Turn it off there, particularly following the pleasures of Part 16, and you might be satisfied enough. (What happened to Audrey? Well, we didn’t know that at the end of the original run either, did we?)

If you kept watching, though, you saw the original series being erased out of existence. The pilot begins anew, but this time there’s no dead body, wrapped in plastic, washed up on the rocky shore. As Josie Packard puts on her face, Pete Martell kisses his fingers, presses them to Catherine’s right ear, and steps outside for his morning walk. But he doesn’t stop, doesn’t rush down to the water, doesn’t make a frantic phone call to Sheriff Harry Truman, doesn’t wait as Lucy Moran reroutes the call across the office – Uh, I’m going to transfer it to the phone on the table by the red chair. The red chair against the wall. The little table with the lamp on it. The lamp we moved from the corner? The black phone, not the brown phone. Pete Martell keeps walking. Pete Martell goes fishing.

The danger of revivals, of nostalgia, fits the plot line of Season 3 – bringing a man back from the Red Room after 25 years of purgatory, watching him, week after week, a shell of his former self, and then, after a fleeting moment to celebrate his re-arrival, seeing him try not to solve but to prevent the murder that brought him there and, in his darkest moment, finally feeling the weight of lost time. It also squares perfectly with  Season 3’s entire problematic and risky existence on television in the first place, the thin line between a story still worth telling and a cherished franchise better left alone.

And despite legions of fans and artists who trace their inspiration back to Twin Peaks, there’s the sense that the woman who owns the Palmer house, who opens the door to a pair of total strangers in the night, has not only never heard of Laura Palmer, but maybe has never heard of an old TV show canceled after two seasons a quarter century ago. 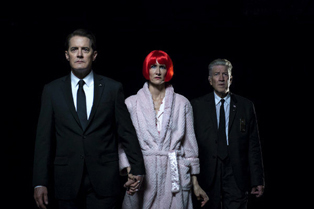 That particular marriage of elements – of plot and purpose, story and vision, importance and irrelevance, comedy and tragedy, with all its bold and unabashedly messy complications and self-awareness, make Twin Peaks, have always made Twin Peaks, unlike anything else on TV. Lynch and Frost left the show, which wasn’t afraid to be a soap opera while making fun of soap operas, with a 25-year cliffhanger, followed by a movie that not only failed to resolve the series ending, but dramatically shifted the tone, added strange characters and locations and story lines, and was a prequel. In many ways, they are trolls, but in all the best ways, not afraid of failure or alienating audiences or actors, focused not on tying up every loose end, but creating those loose ends and letting us fill in the blanks. And, most of all, not afraid to break the show over and over again to keep us guessing.

Season 3 wasn’t about closure or a cash grab, it was dedicated to the deepening of a mystery never meant to be solved in the first place. Along the way, it surprised at nearly every turn, subverting archetypes and expectations. A show that had changed television could never live up to its legacy, but by not being afraid to tear that legacy apart and put it back together again with the seams showing, it somehow managed to do just that.

And while the finale no doubt left many viewers frustrated, the deep sadness I felt in the moments after watching it wasn’t from the belief that evil had triumphed over good – in fact, I’m not at all sure it did – but that the return of the greatest television show of all time had fulfilled an impossible promise, had delivered, and now, after one unexpected, magical summer, was gone again forever.

Who Needs the Devil When You’ve Got the Lord?
Previous Post

Who Needs the Devil When You’ve Got the Lord?