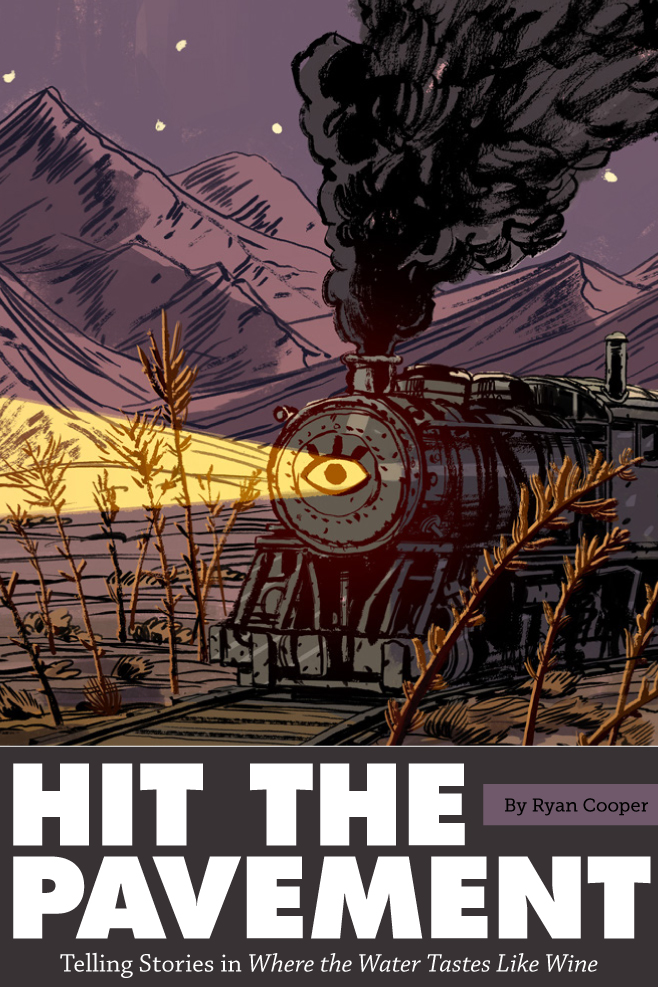 Let me tell you a story. I drove out from California to Ohio, a drive that took me 40 hours over four days. I passed the time listening to podcasts and audiobooks; I was listening to the prepackaged stories, edited for my consumption. They were nice, but somehow corporate. I laughed where I was supposed to laugh, I was contemplative at the meaningful cues and I consumed them one after another, never lingering on a single topic longer than the recording time span. It was a pleasant way to pass the time. Pleasant and safe.

When I woke up in the middle of Podunk, Nevada, I saw a man sitting at the onramp of the freeway holding a sign that said “Ogden.” Having never heard of the place, but feeling the need for some companionship, I pulled over and let the man hitch a ride. That’s how I met Danny: a scrawny man in his 50s with gaunt features, long silver hair, and a firm handshake. He sat shotgun as we barreled down the 80, making our way through Nevada, past the salt flats of Utah and up north of Salt Lake City. All the while, Danny told me his stories.

He told me about the time he came back to visit his friend, the mayor of St. Louis (who lived under the docks of a riverside bar), only to run once he found out that the women he wronged came looking for him when they heard he was back in town. He told me about how he nearly passed out from dehydration in the middle of a bank heist back in the 80s. His partners locked him out of the bank and he stumbled across the way to the back of a local motel to drink from the hose and sleep under the stairs. He told me about his brother in Texas, his sisters in Utah and the loss of his little brother the year prior. Danny told me many stories in the hours I spent with him. When I laughed, it was genuine. When I was hesitant to laugh, it was even more so.

My time with Danny wasn’t always pleasant, and, as it is with the nature of meeting strangers, it wasn’t inherently safe. Between his moments of clarity, in which he would tell stories about his years on the road, there were the minor outbursts: a jerked hand, an abnormal twitch, a movement I didn’t expect with intentions I didn’t know. About the time we passed the salt flats, I caught a glimpse inside of Danny’s rucksack. There were a few cans of peppers, a jar of pickles, a worn-out notebook and a sizable knife in its sheath.

At this point, Danny was borrowing my phone to let his sisters know he was stopping by for his annual visit. His mood seemed cheery enough that the knife didn’t faze me; I chalked it up to a traveling man needing protection. That’s who Danny was: a man traveling alone who had seen some good times and a lot of bad times. Who was I to Danny? A brief reprieve from the sun’s heat and another good person to add to his list of people he had met in his travels. As I said before, my time with Danny wasn’t always pleasant, but it was genuine. I don’t know which of his stories were true and which were exaggerated, or twisted by time, but I do know that each one of them was Danny’s, and he shared them with me. And now I have shared them with you. Why? Because we are storytellers.

We are storytellers. We tell our children stories to teach them compassion, fear, love and hope, and we continue to tell stories throughout their lives as they grow and outlive us, until they are telling their own stories to those who will listen. People may differ in culture, creed and color, but one thing that unites us all is our love of telling and hearing stories. Whether we are weaving frightful delights around a campfire, or enjoying the latest blockbuster hit on our television sets at home, stories are a key component of connecting us to others. However, it is rare to find something within the medium of videogames that not only allows to us enjoy a good story, but to reflect and look into ourselves on what it means to tell a story. To have a story. To share a story. I was fortunate enough to sit down with Johnnemann Nordhagen of Dim Bulb Games to talk about his latest project, Where the Water Tastes Like Wine: a game that aims to do just that…

Ryan Cooper is a California native presently displaced in Ohio. He is a writer, video producer and, formerly, a teacher of robotics and videogame design in the mountains of Northern California.

You’ve been reading an excerpt from Unwinnable Monthly Issue 95.