Hey everybody, we interrupt this week’s regularly scheduled Last Week’s Comics with a blast from the past. Recently, I’ve taken it upon myself to raid dusty quarter bins and put together a run of Amalgam Comics. What are Amalgam Comics, you ask? Amalgam Comics was a publishing imprint created by DC Comics and Marvel Comics. DC and Marvel merged (or amalgamated… get it?!) their characters into new ones during the 1996 crossover event, DC Versus Marvel. Midway through the series, Spider-Man and Superboy became Spider-Boy, Wolverine and Batman became Dark Claw, Wonder Woman and Storm became Amazon, etcetera. Villains included Doctor Doomsday, Thanoseid and Kang the Time Conqueror (AKA Chronos-Tut, the Time Pharoh). All of these characters existed in their own world, drawing inspiration from the entirety of Marvel and DC canons. 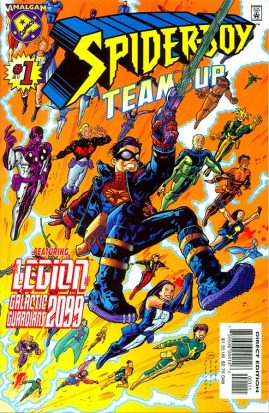 The Amalgam event was so successful that DC and Marvel published a second batch of titles in 1997 adding to the line-up with books like Thorion of the New Asgods, Iron Lantern and Challengers of the Fantastic. The most recent addition to my Amalgam collection is Spider-Boy Team-Up # 1. Writers Roger Stern, Karl Kesel and artist José Ladrönn delve back into the Spider-Man/Superboy mash-up by playing with Kirby’s Cadmus and DC’s Silver Age Legion of Superheroes, Marvel’s Spider-Man 2099, Marvel’s Guardian of the Galazy and DC’s post Zero Hour Legion of Superheroes. Yes, that is a lot of Inside Baseball right there.

The Amalgam books, when done right, remixed the best of what Marvel and DC had to offer and they were a lot of fun. Spider-Boy Team Up # 1 mixes the right amount of DC Silver Age kitsch and Jack Kirby inspired bombastic flourish to introduces the Legion of Galactic Guardians 2099. Ladrönn’s designs and panel layouts blend Kirby and a shonen manga influence. Ladrönn wastes no space in this comic. It’s crammed with not one but two Legions that riff on DC’s penchant for crises.

Roger Stern and Karl Kesel write a tale worthy of Ladrönn’s art chops! The story begins with Spider-Boy fighting the Scavenger/Vulture hybrid, Scavulture (It would have been funnier if they gave him checkered Vans and called him Skavulture, but I digress). Scavulture gets the drop on Spider-Boy and right before the arachnid clone meets his maker, time freezes and Spider-Boy gets whipped to the future. Thus, the time traveling hijinks begin. Spider-Boy travels to two 2099 utopias and one dystopic future between them. He has to find a way back home so the timestream doesn’t collapse on itself. It’s a bonkers plot, but Stern and Kesel fill the book with references to the Legion, the X-Men, Marvel’s 2099 imprint, the original Guardians of the Galaxy, Superman’s Pal Jimmy Olsen and even good old Otto Octavius!

Recently, I’ve fallen behind on a lot of current books. So much so that I’ve started to go back decades and re-read stuff I read as a teenager or stuff I missed. I read this comic when it came out and didn’t know as much about comics history as I do now. I thought it was fun back in 1997, but now that we are celebrating Jack Kirby’s centennial, it’s fun to read a comic like this that turned Martinex and Braniac 5 into a total Kirby creation! Next time you’re in your local comic shop, ask to look at their Amalgam books. They’re probably not going to be in print anytime soon and they had pretty high print runs, so they’re not that expensive. They’re a hoot!

Seeing Whilst Sleeping – An Excerpt from Unwinnable Monthly 94