Gavin Craig has a lot of games on his shelf that he’s never played. Backlog is his attempt to correct that.

This column is a reprint from Unwinnable Monthly #93. If you like what you see, grab the magazine for less than ten dollars, or subscribe and get all future magazines for half price.

Summer is a strange time for my gaming habits. The kids are home, and that places a strict limit on the things I can play. Nier: Automata? Looks fascinating, but that M rating isn’t exactly pre-teen friendly. Thus during the warmer months, my game play tends to take place in fits and starts, and skews toward either all-ages fare or shorter games amenable to a stolen quarter hour.

This is almost certainly critically unfair to the games themselves. At another time, would Hotline Miami present itself as a biting satire of violence and its aftermath, an incisive critique of the manner in which we deaden ourselves to the human implications of the actions we undertake in almost any game that involves a gun? Perhaps, but for now it leaves me with only two impressions. Under the 16-bit blood spatter aesthetics, Hotline Miami is looser, squishier prefiguration of the abstracted clockwork violence of Hitman Go. There’s significantly more adrenaline in Hotline Miami than Hitman Go, but I’m a bit more satisfied that when I fail in Hitman Go that it is entirely my fault. I’ve also never had to shush my middle-schooler away from the door when I was playing Hitman Go and, fair or not, at this time of year, that’s a dealbreaker for Hotline Miami.

My other failed expedition this month was into Titan Souls, which, I have read, is beautiful and compelling, brutal but fair. I can’t really say one way or another. I figured out how to roll and how to shoot and retrieve my single arrow. Then I tried to fight a blob that split in two every time I shot it. I’m pretty sure I’m supposed to focus on the segment that retains the seed/brain thing, but who knows? Any touch from any blob segment kills me and the sort of language that engenders on my part isn’t sufficiently PG-13 to support summer play. 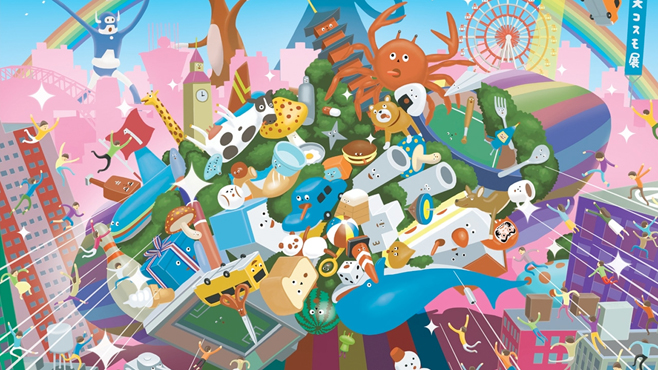 In another month, I might have a column on the interest and impact of the sort of one-hit kill systems that undergird both Hotline Miami and Titan Souls, but I don’t have the heart for it right now. The weather is good, my kids need to be entertained, and I’d rather just roll a katamari. Touch My Katamari might have a creepy name (which refers to the player’s ability to use the Vita’s touch screens to manipulate the katamari, but still, gross) and an even creeper 3D rendering of the King of All Cosmos (the apparent codpiece under the King’s gold leotard is really just unnecessary), but the music is light, the screen is colorful, and I can play it at the pool if I want to.

Does it recapture the magic of the original Katamari Damacy? Not really, and even worse, the game seems to realize it (the inciting incident is the King of All Cosmos’s realization that Katamari Damacy fans don’t think he’s cool anymore), but if summer is the season of frozen drinks and the disposable pleasures of the beach read, then Touch My Katamari is a fine beach play. If you would ever take a portable console to the beach, that is. Personally, I find a shady hat and flip flops are just as comfortable on the sofa, and I’m pretty sure that the Constitution says that we can put an umbrella in our drink anywhere we damn well please. Hell, the kids can have umbrellas too.

Gavin Craig is a writer and critic who lives outside of Washington, D.C. Follow him on Twitter @CraigGav

The Meditative Rhythm of Receiver

Magikarp Jump is the Best of Nintendo Mobile