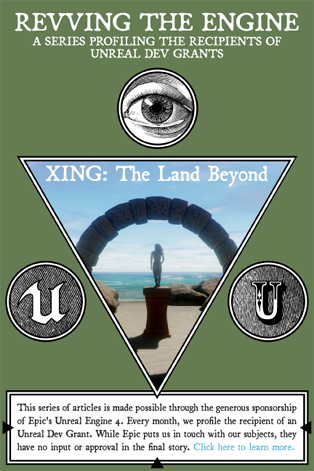 This story is a reprint from Unwinnable Monthly #78. If you like what you see, grab the magazine for less than ten dollars, or subscribe and get all future magazines for half price.

I am a sucker for Myst. When the game came out in 1993, my computer could barely run it, but that didn’t stop me from sinking into it. It was so unlike anything else I had seen up to that point – a lot of people use the word surreal to describe the game, but I think that is misleading. The island is strange, but it is made of dirt and trees and surrounded by water. The buildings reference many architectural periods, but they are still made of stone. They have weight.

No, Myst isn’t surreal. It is mysterious, in a way seldom captured in games before or since. The world of the game and, by extension, its puzzles, exists separately from the desires of the players. It exists for its own purpose and has little interest in being figured out by you, the interloper. This only adds to the atmosphere of intrigue.

A book, Christopher Manson’s Maze, and a videogame, Antichamber, are two other examples that come to mind that play with the idea of mysteriousness in a similar way. I can think of scant others, but when I saw the first screens for Xing: The Land Beyond, I felt an echo of the inexplicable.

As with many Unreal Dev Grant recipients, the John Torkington, Koriel Kruer and James Steininger met in college. Xing’s development began in a game design class at Chapman University in Orange, California, as a level design assignment for Unreal Dev Kit. After taking second place in a design competition, they formed White Lotus Interactive to develop the mod into a full-fledged game.

Xing takes place in the space between life and death, a sort of afterlife. Who you are and why you ended up where you did are the central mysteries of the game. Smaller puzzles involve learning about the lives of spirits that have come before you and helping free them to continue their transitions. Owing to the subject matter, the environments exude a spiritual or mystical quality. Like Myst, there are elements that I recognize as related in some way to faiths and mythologies I am familiar with, while also seeming strange and unknown. These are holy spaces, filled with idols and altars. Mysteries – in both the puzzle sense and ritualistic one – abound.

Xing will be seeing PC release with VR support soon. In the meantime, Koriel Kruer took the time to chat with us about the project. 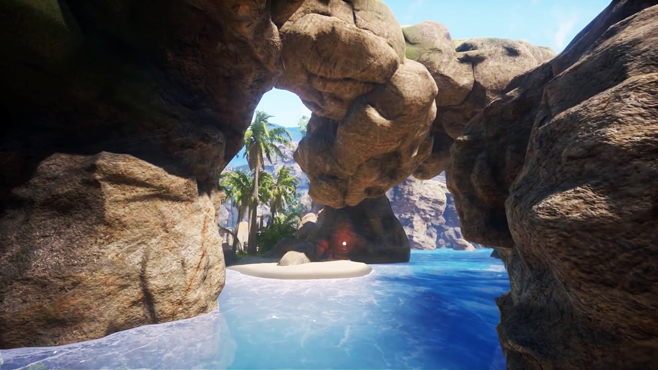 Xing started out as a college project, correct? What was the game like then?

The game was very different from how it is now. Through playtesting, acquiring new skill sets and constantly learning, we have continued to iterate on things like the graphical quality, optimization, narrative, puzzle complexity scaling and more.

The development has also benefited from a successful Kickstarter campaign. Did the campaign have any impact on the game’s development (outside, you know, making it financially possible)? By that, I mean, did you learn anything, say about people’s expectations, over the course of the campaign that you might not have learned otherwise.

We learned a ton by running a Kickstarter. We got a much better idea of who our target audience would be, as well as the fact that there was demand for this type of game. Our backers have also given us insight into what they want from this game, which helps us to understand what is important to develop and keep.

To my eye, the influence of Myst on Xing seems profound. Can you talk a bit about what it is that appeals to you about Myst and how you’ve drawn on that for inspiration?

The appeal of Myst was initially the graphical beauty and thought-provoking puzzles and narrative, and that is something we are also interested in achieving. Environment and atmosphere are important for us and are used as primary ways of communicating with players, such as helping players to focus on the narrative or puzzle aspects of the game and visually lead players through their journey. 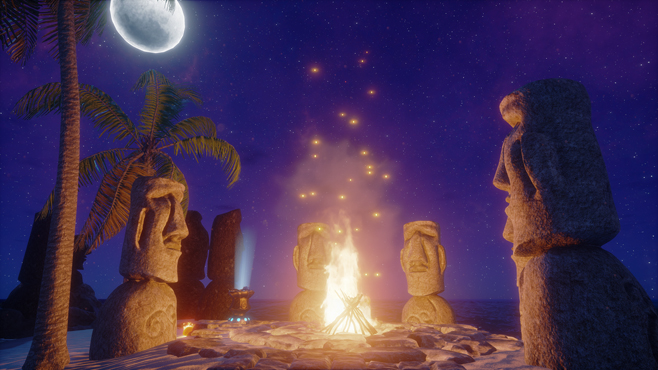 What other games and media have you drawn on for inspiration?

Oh man, that’s a looong list. In short, Xing is directly inspired by games such as Portal, Myst and the Zelda series. If you are interested in more specifics, the three of us each answered this question in great detail in this post.

There also seems to be an emphasis on spirituality in Xing that is intriguing. Can you tell me where that comes from and what you’re trying to convey with it?

I think this is more of a question that you will have to answer for yourself, after you play through the game…

Touché. The spaces in the game seem to reflect that focus on spirituality. How do you go about designing a 3D space to convey this?

Interesting question. Spirituality is definitely a part of Xing and many of the environments are designed with that in mind. Because the game is set in the afterlife, we draw on myths, stories and religions from around the world to help us create our own version of what the afterlife could be. We love researching different belief systems and finding out new perspectives, because they inspire and inform us in creating the narrative we want to tell! 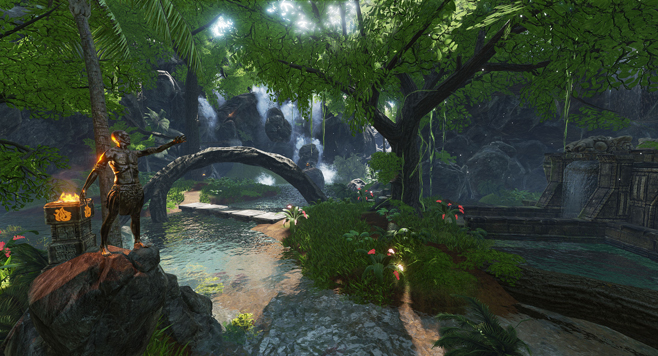 Why’d you chose UE4 to develop the game?

We started building this game in UDK because that is what was on the school computers at the time we started the project. Since then, we have switched to UE4 for multiple reasons:

We wanted to keep up with the times, and truly create a beautiful experience

UE4 has a great UI that is much preferable to UDK

In order to fully support virtual reality devices, we needed to switch to a modern engine that was constantly making updates for VR support

As if all that wasn’t enough, it’s also now free!

Was it difficult moving from 3 to 4?

Yes and no…we actually have an entire blog post devoted to this question.

Obviously it has been a while since that post, but the main points it makes remain true: it was a necessary change for keeping up with modern graphics as well as being able to run using the latest virtual reality headsets.

How is it developing an exploration/puzzle game in UE4? Has it posed or solved any particular challenges?

Unreal Engine 4 is very robust and actually works for all sorts of game types. The built-in first-person controls work quite well out of the box and with a few adjustments we were able to create the type of player we envisioned.

For example, instead of equipping the player with a weapon, the player is granted the ability to pick objects up and carry, place or throw them to new locations. From a programming perspective, an early version of the “physics gun” used to pick up objects used some of the same code as other Unreal Tournament weapons.

When we transitioned to Unreal Engine 4, our programming tasks were made easier via Blueprints, a visual node-based code environment developed to ease the creation of mechanics and objects requiring interaction. Blueprints have allowed us to rapidly iterate and test gameplay features of our game. When we were creating the fire system for example, we could visually place the different particle, lighting and sound components in 3D, then create a Blueprint component out of those pieces which could then be made part of other objects. If an object with the fire component touches the ocean Blueprint, the ocean can bypass the parent object and speak directly with the fire component in order to extinguish the fire. Of course, this might not sound too dissimilar from object-oriented programming in other languages, but Blueprints has the advantage of a visual node based environment, which can be easier for artists or designers to understand (and also lets you adjust components in 3D space while you program them). 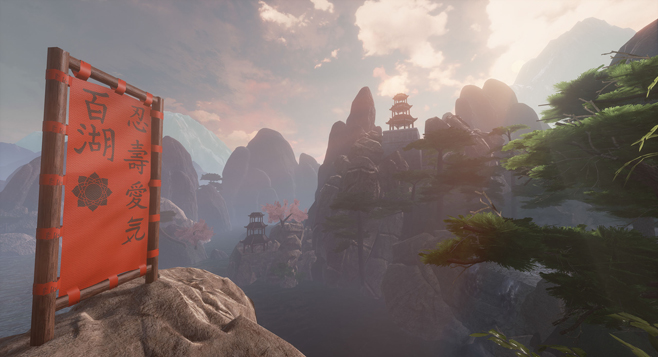 It also becomes a lot easier and faster to make tools for the level designer, who if need be can easily jump into the Blueprint to make adjustments. Some examples of easy to use tools include torches, which can change color or intensity using sliders and a color wheel, or any objects with text-which can be edited on the fly.

There are a plethora of game mechanics built into existing Blueprints, such as characters or vehicles with locomotion animations and logic. It can become daunting with Unreal when focusing on larger systems such as level loading, save systems or creating user interfaces. The ability to create these types of systems is certainly there, and the community has made plenty of tutorials and shared example resources on its own. However, Unreal Engine 4 gives you so much flexibility with how you can build these systems that it can become overwhelming, especially if you’re requirements for those systems are not discretely laid out.

It’s Time for Board Games to Take a Stand

The Lost City of Z is Just Another White Explorer Story