This column is a reprint from Unwinnable Monthly #86, the Family issue. If you like what you see, grab the magazine for less than ten dollars, or subscribe and get all future magazines for half price.

There’s something endlessly fascinating about a mysterious world populated with haunted ruins. This is the foundational beauty of Tolkien’s Lord of the Rings: Middle Earth is a world in decline. There are ruins everywhere. From Tolkien, it is a short hop to Dungeons & Dragons, with its titular complexes often filled with forgotten treasures. In videogames today, mysterious worlds and ruins are less a genre unto themselves than a unifying theme across all genres. Swords & Sworcery, Journey, Shadow of the Colossus, Dark Souls and on and on.

You can see the influence of all these and more in Ashen, an open-world, passive multiplayer adventure of bleak beauty, a game that seeks to examine our compulsion to explore the lost and the abandoned.

Developed by Aurora44, a studio located in Wellington, New Zealand, Ashen is very much a game born of its place – majestic mountains, wild plains, harsh but beautiful. In the spirit of Kiwi ruggedness, Ashen asks players to cooperate with others in the world, forming bonds that will help you to survive as well as civilize, despite the dangers in the dark.

The studio formed to bring Ashen to life, drawing talent from both the film and the games industry, like Weta, EA, Gameloft and more. They are driven by a desire to make an intricate and believable world for players to explore. Design Director Derek Bradley was kind enough to chat with us about making imaginary worlds feel real and dangerous.

Let’s start with inspiration. What influenced you, in terms of Ashen’s look and its gameplay?

Derek Bradley: From very early on, one of our greatest influences has been the New Zealand countryside.The same breath-taking views that enthralled audiences in films like The Lord of the Rings and The Piano have inspired the dark, mysterious world of Ashen.

This attachment to the environment around us has influenced the whole production down to its core. We built Ashen from the ground up, so to speak.

First, we imagined the mountains and valleys that make up the world, then the waterways and paths and finally the foliage, before beginning to consider the world of man.When we did come to consider how the living creatures of the world came to be, including man, music by Foreign Fields struck a chord with us. Particularly a track entitled, “Names and Races.” We had come to this project with such a strong connection to the land; I remember coming across their music in a blacksmithing video (doing research for the game) and having the down-to-earth, genuine feel of the song fit perfectly with our vision for Ashen.

Interestingly, we had been reading The Road, by Cormac McCarthy, at the time, and were influenced by that. When we finally contacted Foreign Fields and discussed cooperation on Ashen, we found out that “Names and Races”was also inspired by The Road.

So, we found that some of our biggest influences outside of games happened to converge in an interesting way. 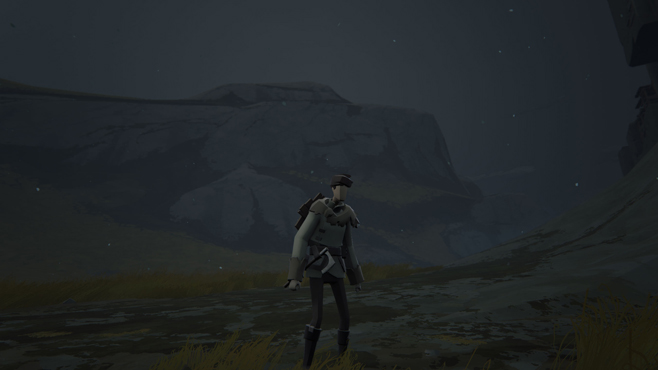 There’s a sense of isolation, mystery and melancholy inherent in ruins that, judging from the trailer, you captured in Ashen. How do you go about infusing the environment with those characteristics?

D. B.: There is something inherently New Zealand about Ashen. It might be that we are a group of creatives influenced by this dark, mysterious part of the world.

Thinking a bit more deeply about the island our studio is situated on, it is a place surrounded by a jagged coastline and deep, cold waters. It is a land of active volcanoes and earthquakes, truly isolated from the rest of the world. I think there is some of this perspective buried in Ashen that allows players to venture out into something unique and yet wistful.

New Zealand is also a land of explorers and dreamers, with a rich history of heroes like Sir Edmund Hillary who, along with Nepalese Sherpa mountaineer Tenzing Norgay, became the first climber confirmed to have reached the summit of Mount Everest. While somewhere like Everest could be considered cold and dangerous, there is room for the human spirit to triumph, even there.

In a similar fashion, Ashen makes way for the adventurer in those who venture out into the dark.

Most of all, the game conveys cold better than any I’ve seen in recent memory (any at all, even? Maybe The Thing, back in 2002?). How did you make the cold such a presence?

D. B.: In the most straightforward terms, this is a cold land. We haven’t attempted to telegraph any of the environmental factors in Ashen, which gives it an interesting feel.

I think for this reason, the cold naturally seeps into the bones of people playing or watching Ashen; it just is. For the most part, much of this has been a result of the slow, methodical building blocks we have put in place.

We are always careful not to overcook anything. We keep things like cold within terms players will understand and relate to, while supporting it with a plethora of environmental causes. These environmental causes are huge things, like the angle of a mountain, or the direction of the wind. What players see is the tip of the iceberg, where the mountain range crests over the fog.

There are a lot of subtle and inferred factors that help shape the way players feel, and on the flip side, help our team to continue developing a world they believe in. 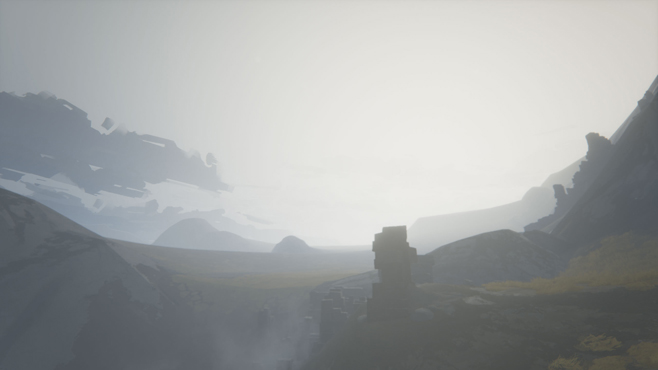 I’m also struck not only with how deadly the game world appears to be, but how quiet the violence is. The undead warrior in the trailer just slides the sword into the explorer before he, or the audience, really knows what’s happening. My reaction was a mix of panic and resignation. This differs quite a bit from the spectrum of violence usually presented in games. Can you speak a bit about how you approach violence and death in Ashen?

D. B.: We have drawn a lot of inspiration from the real world in this regard. Creatures out in the world have evolved to have camouflage and silence to assist them in surviving an unforgiving natural world. They attack silently from the dark.

The same is true for Ashen, and the very real, yet understated, fear that it can produce is something we are very interested in.The goal is to find something that might scare you in the real world, and immerse players to the that they are absorbed enough in this world to allow the truth that it offers to hit home.

It comes down to some very down to earth questions that our developers pose every day. What feels real? Getting this right means we can tap into emotions that are buried deep within all of us, the things that truly make us afraid of the dark are closer to a lion stalking out in the darkness than a giant flaming behemoth.

So, when that silent spear drives through your travel companion, and you lose them, it is snipping off a thread that was a genuine experience. For the gameplay experience in Ashen, this is absolutely essential. A genuine Beginning deserves an equally truthful, yet tragic, End.

On the site, you describe Ashen as a world that moves on without you. Can you expand on how that works and how you developed that?

D. B.: We don’t want to guide players past all of the content in this world. Instead, we want them to find something that is their own.

Doing one thing may naturally change other parts of the story. This is because we prize a genuine, immersive experience over additional content, though you could always replay the game to see how other choices might have played out.

For us, it has been a choice between showing players everything, or showing them something they know is their own. For what we are trying to do, giving players the ability to trace out their own genuine experience fits.

Development wise, it has been more of a shift in thinking than anything else. We don’t mind changing things, even though it may mean a player doesn’t see that content. Instead, we prize the ability to lead each player down a crooked path that defines their story.

Is the passive multiplayer in line with Journey or with survival games like DayZ? And, if the latter, how do you balance the dangers of the environment and creatures of the world against the potential danger of other players?

D. B.: It is more in line with Journey, or perhaps the cooperative play in Dark Souls.

While we enjoy the risk of meeting other players who might be enemies in games like DayZ, it has been a deliberate choice on our part to craft the best cooperative experience we can. 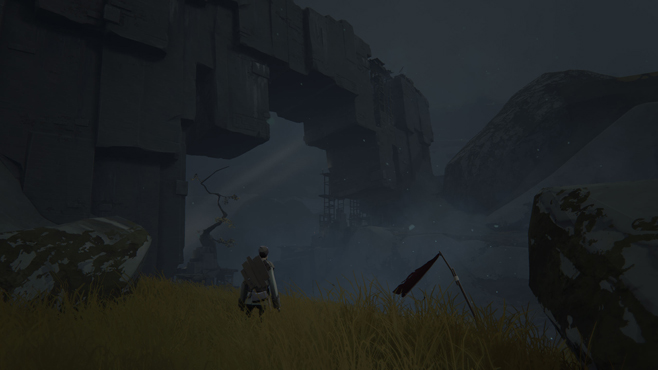 D. B.: We want players to experience a genuine connection to this world. For them to feel they have gone on a journey that is uniquely their own.

How does Unreal Engine help in developing a game like Ashen? Are there any unexpected benefits or challenges?

D. B.: The team at Unreal are the best at what they do. This effectively means we can focus our development efforts on story, content and gameplay to achieve an overwhelmingly more polished game for players than if we were diverting our efforts to creating or extending an engine.

The resources required to create an engine even close to what we are able to achieve with Unreal would be staggering. As a group of developers who want to use an engine on the bleeding edge of real time technology, there is nothing like it.

D. B.: The Unreal Dev Grant allowed us to expand our team at a crucial time in our development cycle. This allowed our team to focus on creating the world of Ashen and played an important part in shaping the game Ashen is today.

The Song Doesn’t Remain the Same