Hammerhead is the World is Not Enough of James Bond comics, mostly because the plot is basically lifted straight from that particular film. It took me a minute. I’ve seen every Bond film but The World is Not Enough is only memorable to me because I thought the villain’s name sounded
like “nards.”

The biggest shame of Hammerhead is how much it feels like Call of Duty. Read as a whole, the arc moves from set piece to set piece and caps everything off with a big shoot off with the biggest, shootiest gun.

Normally, that would be fine. Under normal circumstances I’d be happy to get a gadget heavy, explosion-fest were Bond fights a shark. But I’ve been spoiled. Andy Diggle struggles to find the weirdness and austerity of Warren Ellis. It’s a fool’s errand to just copy Ellis but perhaps more so to ape some of the weakest James Bond movies of the last 20 years. 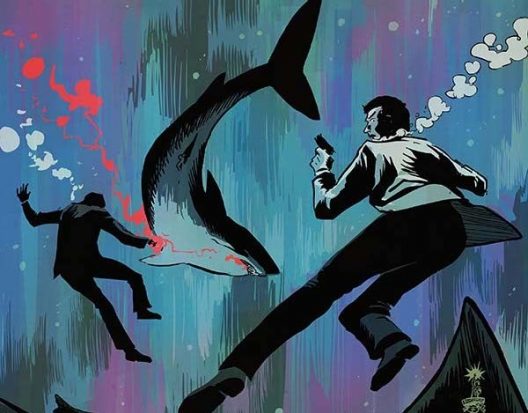 Ultimately, it’s a paint by numbers Bond story. Whereas Vargr and Eidolon both felt like Ellis was in a sandbox filled with someone else’s toys, Hammerhead feels like someone is playing with 90’s James Bond scripts. The vibes from Goldeneye are harder to see but they’re there. I’d even peg all the aquatic stuff on Tomorrow Never Dies.

I’m a little disappointed by how uneven the issues look as well. The last half of the set use a liberal amount of blacks and abstractions. It looks like the whole thing is dripping with black ink or oil. It’s great. But that darkness is nowhere to be scene in the earlier issues. Except for the shark attack, there’s no sign of the brilliance of the later issues. Bond stories generally follow an arc down towards the climax but it would have been nice to see the art better reflect the tone.

Ultimately, Hammerhead is a quick read that isn’t challenging or particularly thought provoking. Of the first three arcs, it’s the weakest. But it’s also the one that’s got me most excited for Kieron Gillen’s massive 48 page special later this month.