“It’s like soccer, but with cars. Also, there are rockets on the cars,” was how Rocket League was pitched to me. I hope that was how it was pitched by Psyonix. The beauty of Rocket League is its deceptive simplicity. Its easy to pick up, hard to master, and nearly impossible to not enjoy. It’s a weird little spin on an existing sport that’s arguably the world’s most prevalent. But as esports take off in all sorts of wild directions, where are the ones that look at least a little familiar?

Where is the game that is baseball but everyone literally has cannons for arms? Or basketball but in zero gravity? Or sumo wrestling but underwater and it’s an RPG. Or tennis but winter and the ball is a snow ball that accelerates as it loses size. It’s like [insert sport] but with [conceit] games should be falling out of the sky. I’m not prepared to say that for esports to become “mainstream” they need to further resemble preexisting sports but I will say that there’s a wealth of untapped potential there.

Overwatch is a fantastic execution of “its like X but with Y.” Think of it as king of the hill but with guns and powers. It isn’t just king of the hill, though. It’s a game that takes a fairly basic, familiar concept and defamiliarizes it to the point where calling it king of the hill isn’t usefully reductive. Success in any given match of Overwatch is partially based on how well a given team plays king of the hill but the joy of playing comes from other moments. That feeling of victory is great but so is seeing yourself make the game defining play or coming away with a slew of medals. 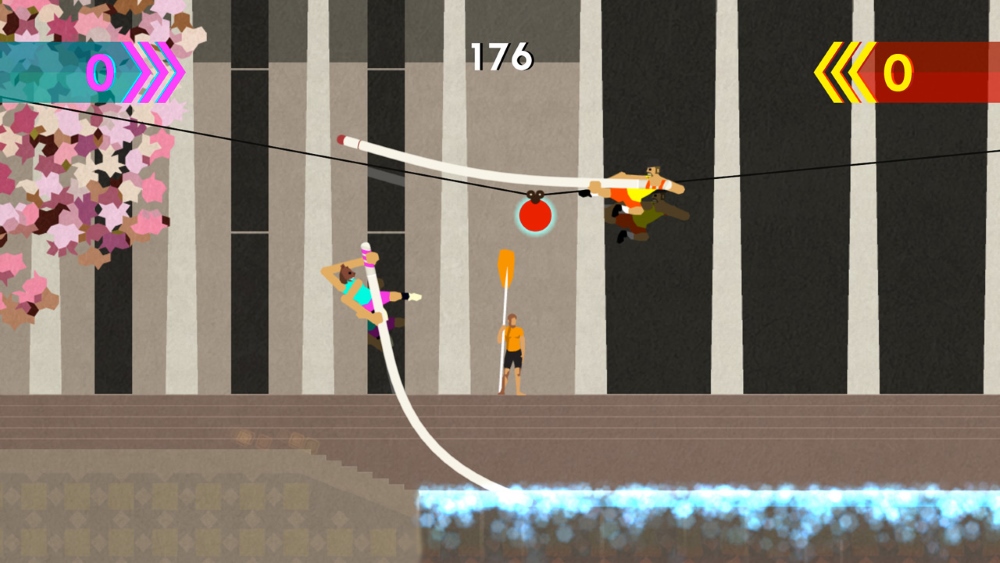 What remains to be seen is the continuing development of games that use videogame’s unique power to be engines of impossibility or absurdity. That absurdity is what makes Sportsfriends or Behold the Kickmen so delightful. Each bucks the orthodox in favor of strangeness. BaraBariBall is a ball-to-goal game with just enough Super Smash Bros.. Pole Riders combines maps, poles, vaulting and basketball (I guess?) into a simple, beautiful game. And Behold the Kickmen purposefully misunderstands the game its based on into a snow globe world of silliness.

But where is the next wave of wonder? One of the threads that links CS:GO, League of Legends and to a lesser extent Overwatch is that they’re serious. They don’t revel in absurdity or frivolity. The only thing close to bridging that gap is Splatoon, a game which combines the twitchy responses of a shooter with the whackiness of “soccer but with rocket cars.” As with many movements in games it seems like we’ve stopped there. I don’t want Splatoon 2 as much as I want football where the players are actually the mascots. I want the Chicago Bears to be 11 brown bears. Granted, it’d get weird when the Chargers took the field but whatever.

Somewhere along the line people began to assume that “competitive” was synonymous with “serious.” That’s silly. But it’s not the silly we need. The recipe that birthed Rocket League is one that can birth dozens of other games, games that can be accessible to people who are put off by the self-serious competitive scene. So, where’s my underwater sumo RPG?

Just Who is Tej Parker?