I’ve gained a reputation among my friends as the guy who owns too many board games. Although I’ve been attempting to cull much of my collection lately, it’s hard to argue that the reputation holds significant weight; at one point, I found myself taking up nearly two full bookshelves with games, leaving precious little space for actual books.

Despite the sheer variety of genres represented in my collection, I find myself returning to the same handful of games over and over, which is what prompted the culling to begin with. This repetition is in large part thanks to requests to bring a simple game to small gatherings and parties for a casual night spent slinging cardboard and drinking beer and wine. Because the roster of party-goers is in constant rotation, it is hard to peg down just what kind of people will be there, making it impossible to judge their familiarity with designer board games.

Because drowning someone in a rules-heavy game like Terra Mystica or Imperial right away is generally frowned upon, the safer bet is to bring along something with simple rules that can be explained in minutes, something that people can start playing and understanding right away. For years, my go-to title in this regard was the perennial classic Carcassonne.

The premise is that players are medieval builders contributing to the construction of the French city of Carcassonne. At the start of the game, the board consists solely of one single square tile. A player’s turn involves drawing a tile from a bag and placing it adjacent to an already-placed tile, thus growing the city’s castles and farmland. The rules state that the active player must reveal the tile to the entire table so that everyone can debate its placement. This rule goes a long way in getting every player involved, and is the biggest reason Carcassonne is a great fit for parties. 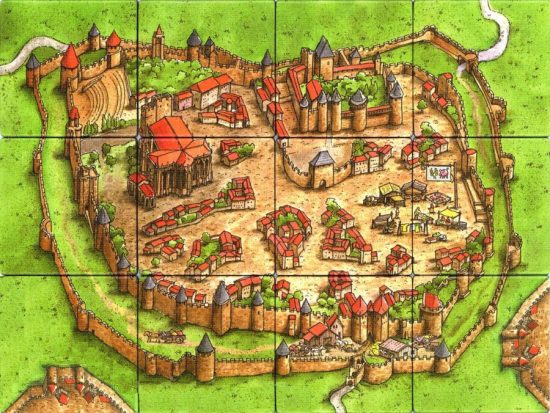 Another reason Carcassonne is so appealing is aesthetic: as the game progresses, the city of Carcassonne grows one tile at a time. It’s ever-evolving, growing from its humble single-tile roots to a sprawling metropolis of farms and rivers and citadels that threatens to engulf the table. It’s a great visual cue that makes it easy to track game progress, not to mention that it’s great fun to see something to which you’ve contributed grow. The art style of the game also goes to great lengths to match the look of its real-life counterpart.

I personally have a lot of sentimental value attached to Carcassonne, as I attribute my love for modern board games to it. These days, however, Carcassonne is more a tourist trap than a permanent residence, but my fondness for the quaint city remains. Arguments could be made that games like Codenames or Snake Oil make a better fit for parties, but there’s a comfortable quality to Carcassone that simply cannot be topped. I will forever be grateful for the time spent with the game, for it helped shape me into the hobbyist I am today.

The Joy of Justified Nostalgia