In 2016, XCOM 2 was in my top ten games of the year. The game iterated on its predecessor in all the right ways, from new enemy types to increased customization options. The sequel continued to emphasize forethought and tactics, as well as severe punishment for bad play. In short, it was everything a sequel to a great game should have been. To this day, there are few moments in gaming that match the feeling of making it through a mission by the skin of your teeth, or perfectly executing a plan with no casualties.

Like any good series worth its salt, XCOM has its share of imitators. Thanks to Unwinnable’s Matt Sayer’s recent piece on difficulty in games, I was turned onto one such game. SteamWorld Heist, released in late 2015, is a 2D take on XCOM’s tactical battles. Conceptually, Heist can be described as a steampunk-western combination of XCOM’s punishing difficulty, and the 2D battles of the Worms franchise. If you were to write that description on a sheet of folded paper and then slide it across the table to me in a sort of business negotiation facsimile, I would immediately buy what you’re selling because it sounds fantastic.

Luckily, SteamWorld Heist largely delivers the goods. I would say that XCOM is still a technically superior game, but, surprisingly, there are a few things SteamWorld Heist does better than its 3D parent. Here are three of them.

One of the most common complaints leveled at XCOM is its reliance on luck. This has become something of a meme thanks to the seemingly endless stream of high-percentage misses, like this video from YouTuber heirtothestar, or this thread dedicated to complaining about the mechanic. SteamWorld heist takes chance out of the equation by giving control of aiming to the player, which goes a long way in making you feel more in control of the battlefield. You can also find guns with laser sights, allowing you to attempt some tricky ricochet shots. The downside is that when you miss, you know whose fault it is. 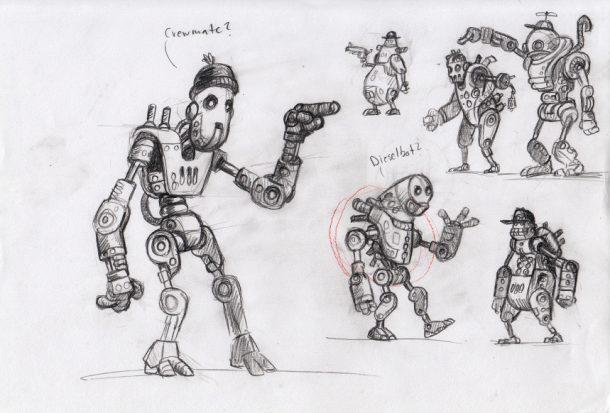 XCOM is a fantastic game, but it is severely lacking in the fun character department. Bradford and crew are fine, if serviceable, characters. They get the job done but they leave a lot to be desired personality wise. The soldiers you take into the field are literally blank slates with no discernible humanity aside from their appearance.

The cast of SteamWorld Heist is packed full of fun, memorable characters, from Captain Piper’s gung-ho attitude, Seabrass’ penchant for a scrap, and Sally’s farming background. Each crew member is given a chance to shine, which is even more impressive when you realize SteamWorld Heist has no spoken dialogue.

A selling point of XCOM is that your choices in battle matter. One wrong move and you could lose your best sniper for good. The sense of defeat can be exacerbated by naming her after your wife, which is something I strongly discourage because you’re simply bound to lose soldiers along the way. SteamWorld Heist opts for a more casual approach that sees fallen characters resurrected after battle. I’m not saying that the tension of XCOM is a bad thing, but sometimes its nice to play without the crushing pressure of your soldiers’ mortality staring you straight in the face.

In the long run, I still enjoy XCOM much more than SteamWorld Heist, but I think I was just surprised by how satisfying the latter game was. If you haven’t had a chance to play it yet, I urge you to give it a shot because you’re missing out on a very creative and addicting experience.