The thegn is dead, cut down by the enemies of your clan. Some say his errand was foolhardy and irrational, the crusade of an unqualified leader. This sentiment is echoed by nearly every clan in the Norse Lands. Outside of his own clan and family, the passing of the thegn brings little sorrow. Instead, ambitious vikings see an opportunity to rise to a position of leadership and power. But tradition says that chiefdom falls to you, the oldest child of the dead thegn.

The ashes are still smoldering on your father’s funeral pyre when questions of ascendancy start to float around: is his heir worthy of the title of thegn? Will the next leader serve the best interests of the clan? Is there someone stronger who might be a better leader? The political state of your clan is dismay and unease, and it’s up to you to quell the dissonance that has been borne by this power vacuum.

Expeditions: Viking is an in-development RPG by developer Logic Artists, the group behind 2013’s Expeditions: Conquistador. The game is currently in beta and offers a good look at the combat, dialogue choices and character development players can expect to see in the full release.

The beta begins at a feast in honor of the dead thegn. You play the role of his heir, a character that, in true RPG style, has been created and customized from scratch. The customization options are plentiful (no joke, I spent a good amount of time choosing my warrior’s socks), and there are many skills and builds to choose from. It can be daunting, but the tooltips and help text make sure it’s easy to find what you’re looking for. 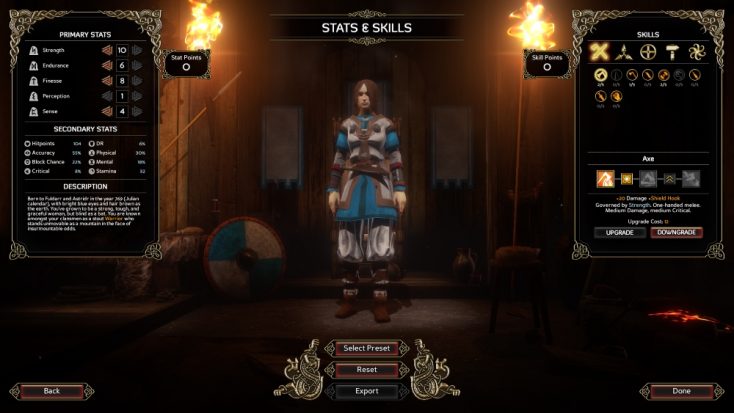 As you greet the thegns from other clans who have come to offer their condolences for the death of your father, you learn that there are many vikings who would claim the title for themselves. It doesn’t take long to see the tension boil over; clansmen from a rival clan attack the feast, forcing you to intervene.

Combat was the biggest surprise during my time with the beta. Going in, I expected something akin to standard CRPG turn-based combat. Instead, what I found was closer to XCOM than Baulder’s Gate. Battles take place on a large hex grid and characters have two actions they can take on their turn: move and attack.  They can also take cover behind rocks and walls, reducing the damage they take or increasing the chance for attacks to hit.

While it draws from strategy games like XCOM, Viking’s mechanics and character development are unapologetically RPG. There are a number of classes from melee warriors to ranged magic users, each with their own skills, spells and abilities that have varying effects in combat. There’s also a host of mechanics that take inspiration from tabletop RPGs, such as enemies having attacks of opportunity as you enter or leave their range. It’s a unique blend of play styles that has me very intrigued. 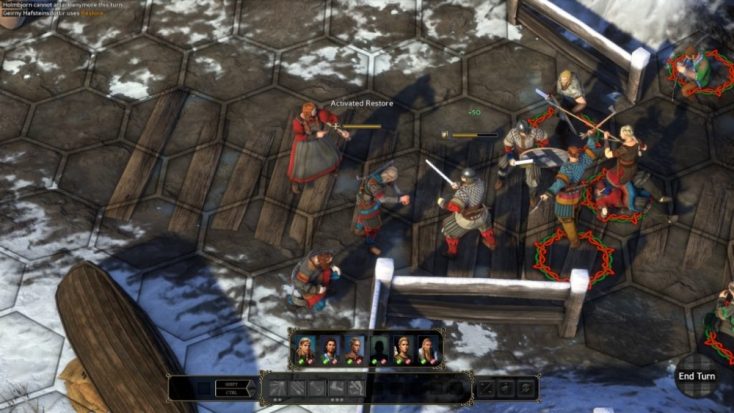 After subduing the attackers, your ascendancy is challenged by a member of your clan and you agree to duel at dawn the following day. How you proceed from here gives a good look at the choices you can make in Viking. Your character fears their ability to win the duel, so you are provided with the chance to even the playing field using more subversive methods.

You can seek aid from the local blacksmith, the hunter and a witch who lives in seclusion in the woods. Approaching these three people is completely optional, but they can offer an advantage in your coming duel: the witch can provide a poison that can give you an edge in combat, and the hunter can set a trap for your opponent ahead of time. Be wary, though, as taking such measures will affect how your clan sees you.

There’s more than one result possible for the duel, but each one is mired in political tension. Logic Artists has created a believable and interesting world full of differing viewpoints that go a long way in selling its believably. Also, the real-world setting of viking-controlled Denmark is something not often explored in games. This seems to be the modus operandi of the Expeditions line of games, and I’m definitely interested in exploring an RPG set in our world.

The setting will go a long way in setting (sorry) Expeditions: Viking apart from the currently crowded PC RPG scene. I am certainly impressed with what I’ve played so far, and I will look forward to the full experience, set to launch in early 2017.