Every once in a while, a game comes along that everyone buys. More often than not, those games are made by Rockstar and this is definitely true of L.A. Noire, which hit stores this week. There has been scarcely a moment since Tuesday when there has been less than a dozen friends on Xbox Live playing the stylish detective game. There’s been a lot of hype and excitement surrounding the game during its long development time, but how does L.A. Noire measure up to expectation? Team Unwinnable recorded their first impressions at the two hour mark, or the first achievement, whichever came first – and the results were surprisingly varied…

Stu Horvath: When I drove over to the store with George to pick up my copy of L.A. Noire, I couldn’t help but air my misgivings about the game. I didn’t know what it was, but despite the fact that it features a million things I love (noir, pulp, fedoras), some cloying thing made me doubt that I was going to like the game very much. Then I opened the box and found the package of 35mm negatives and I was right on board. Surely, this was going to be amazing.

Then I put the game in the Xbox and found myself surrounded by doubts once again. 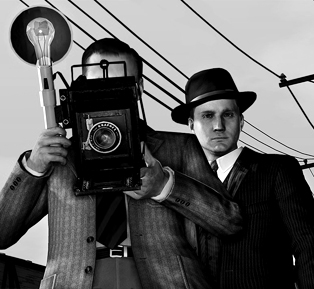 There is no shortage of goodness in L.A. Noire. The notebook menus, the amazing lighting (I don’t think I’ve ever been so impressed by lighting in a videogame), the feel of downtown Los Angeles. But there is bad in there too – stiff controls, inflexible interrogations, creepy character models (welcome to the Uncanny Valley; the characters of L.A. Noire make the Gentlemen from Buffy the Vampire Slayer look natural and relaxed) and too much love for L.A. Confidential (I could have lived with the Irish mentor, but did they really need to put in a flashy vice cop minutes later? The dialogue in that scene felt like it was lifted directly from the movie).

So here I am, having finished my first case and made detective, but I am unsure. I want L.A. Noire to be great, but I am afraid it will be awful.

Ken Lucas: The more I play L.A. Noire, the more I am pulled into the dark, seedy underworld of 1947 Los Angeles. I think Rockstar Games has delivered once again, this time with a romp following a cop’s career from a rookie flatfoot to a full blown gumshoe. The presentation is very slick with clean visuals. Unlike Stu, I think the character models look great and set a new standard for games. More games should have the depth of facial detail and nuances that Noire exhibits. While there are some elements that harken to Mafia II and The Godfather, for the most part it feels like an extension of the Grand Theft Auto series. I like that I am pulled closer into the action rather than having that distant over the shoulder view of previous sandbox titles. I can’t wait to delve deeper under the shroud of mysteries in L.A. Noire.

Rob Roberts: Not exactly what I was expecting. Don’t get me wrong – the game’s not bad. I just assumed it was going to have a Red Dead Redemption level of open play. Sadly, it doesn’t. You can move throughout L.A., but as far as open play goes, that’s all you can do. You can’t freely draw your weapon, you can’t interact with strangers (aside from bumping into them), you can’t jump (a minor gripe, but I just love jumping in games), and only some objects in the environment are destructible (e.g., You can knock down a light pole with your car but can’t drive through a simple chain link fence; a fallen garbage can stops your character cold – argh!). The gameplay is mainly dictated by your cases and stopping street crimes.

On the plus side, Los Angeles looks awesome and when the game is set to black and white mode, the entire effect is perfect (I also recommend turning off your lights).

My Three Year Quest to Suffer Through L.A. Noire

Running the Gauntlet at the Museum of the Moving Image