For all that I focus on manga, you might be forgiven for thinking I have something against Western comics. It’s not true, though: I came to comics almost exclusively through Western writers, and from less auspicious beginnings than all my current pretensions might suggest. Before the early admiration of Alan Moore, before the formative years spent fawning over Neil Gaiman’s Sandman, before the half decade where it seemed like Grant Morrison’s super-strange pop theorizing were a worthy substitute for the academic philosophies my more intellectual friends were plumbing, was an even younger obsession with the major superhero artists.

My formative years were marked by an unstinting admiration for the works of Jack Kirby, Steve Ditko, John Romita Senior et al and the realization that comics were at their best when they were striving to be strange. For all that I’m a snob, I’ve never stopped trying to recapture the magic of those early works, so when a friend suggested I take a break from my manga exclusive diet by reading Jonathan Hickman’s run on Fantastic Four (and, later, Future Foundation), I caved without much of a fight. While I had read and completely despised Hickman’s mammoth stint on The Avengers and New Avengers for being a portentous mess, more interested in building to a gargantuan conclusion than in saying anything about it, my spirits have been at low ebb these last two months. Hickman’s run, my friend assured, captured the same Jet Age optimism that makes Kirby’s run such a potent antidote to the kind of cynicism that’s since colonized my brain.

I can see how he was tricked. Hickman knows well how to adapt the imagery that lends the Fantastic Four so much of their appeal. He has an eye for artists who know how to capture the retro futurism perfectly, that made even the most impossible technologies seem also quaint and homey, and knows full well that the appeal of this superhero team is more their propensity for going on bizarre high-concept sci-fi adventures than it is trading blows with Doctor Doom. And, to that end, he’s pretty good when it comes to cooking up the kind of big ideas that distinguished early issues of the Fantastic Four as science adventures par excellence. A council of Reed Richards assembled from across the multiverse? An artificial earth inhabited by the remnants of a collapsing alternate future who had to jettison their doomed world to find a new home in the past? A war between four lost cities that threatens to spill out into a cosmic conflagration thousands of years in the making? A school of young, unorthodox geniuses assembled to help carry on Reed’s impossible self-imposed task to “solve everything?” There’s a scope that is easy to mistake for vision in Hickman’s titles that suggests his ideas will pay off in the same lofty ways that Reed and the Future Foundation’s newest scheme will, yet he never manages to deliver on them.

The reason Hickman consistently falls short of his lofty promises is because he never stops building. Every intricate plot, every exotic vista, every wild new concept is introduced just long enough to be established as an essential part of his larger game plan, and then relegated to its role as another moving part in the Rube Goldberg machine that are Hickman’s plots. The council of Reeds is an idea absolutely full of wonder, a potential to explore whole new universes of possibility, and yet it’s barely been an issue before it’s dismantled by Mad Celestials and reduced to a plumb bit of foreshadowing. The four cities at the heart of the “war of the four cities” are each introduced and then forgotten for dozens of issues. Nothing of their culture is shown; two receive so little coverage at all, it’s easy to forget that they were part of this conflagration.

While this makes for promising reading at first (“just wait until it pays off!” you think), the problem is always the same: Hickman is always building to a catastrophe that promises to be world-changing but is so emotionally empty and so philosophically vacant that when it arrives it feels unrelated to everything you’ve been reading. The climactic moment where Nathan Richards resurrects Galactus to serve as his herald in the fight against the Mad Celestials should be wondrous, the culmination of a thousand tiny character moments and plot threads, but instead feels utterly unearned. We barely known the Mad Celestials and know less still about their ambitions; the most we’ve seen them do is utter cryptic statements and fire lasers, and the most we’ve heard about them have been portentous statements uttered in prophecy. They hardly seem worthy of the near sixty issues of build-up that have led to this point. 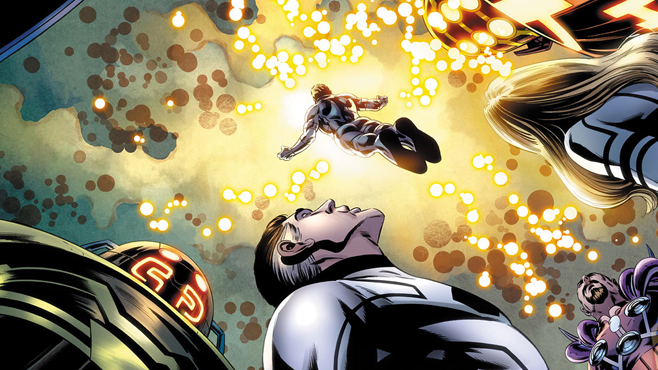 But then, nothing in Hickman’s story does because he forgets the time and focus that exist in real exploration. The many elements of his story exists only to set-up the plot’s ultimate pay-off, as if plot was the end goal of storytelling and we were all reading so we could add a notch to our belts. It’s an oddly cynical approach to storytelling that characterizes Hickman’s major flaws as a writer and seems to explain why all of his stories boil down to slow builds towards a grand apocalypse: he seems utterly uninterested in the worlds and people he’s consigning to oblivion. What’s troubling is that there are scattered, delicate character moments throughout this arc that suggests there is a better writer that Hickman will not nourish, a writer so much more in touch with the strange than the megalomaniac, so pronounced here and in the rest of Hickman’s work.