For an extensive team of weird and wacky police aliens, The Green Lantern Corps always seems to anchor itself on a few key characters. These days if you’re not Guy Gardner, John Stewart, Kilowog, Tomar-Re or Salaak there’s a good chance you’ll bite it by the end of the issue. There are thousands of Corps members so killing one or one hundred of them is often a quick way to raise the stakes. Heck, at one point DC killed off almost all but one official member! That said, I knew that the most fun-looking and unique member of the Corps that I saw on the cover of Green Lantern Corps: Edge Of Oblivion #1 was not going to make it to 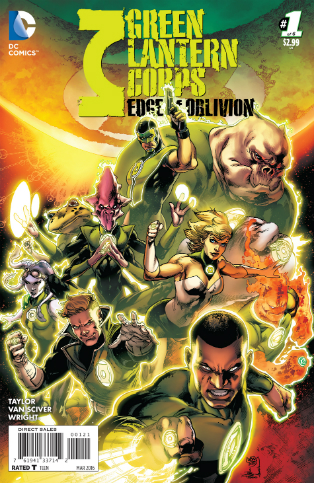 the end of the issue alive.

After the events of Green Lantern Corps: Lost Army our crew of aliens, humans and humanoids are lost in space. Struggling to figure out how to get home, they must also figure out how to deal with the inhabitants of the dying universe they’re in. Some of these are among the thousands of survivors looking for salvation, some claim to be their protectors, and some hooded sinister types are looking to cause trouble. All in all it’s a solid introductory issue, although nothing too mind-blowing in the grand scheme of stories involving the Green Lantern Corps.

Writer Tom Taylor gets props for juggling so many unique characters and giving many of them a voice; from an angry squirrel to a noble alien fish Green Lantern, it’s no easy task establishing the cast, but Taylor does such a good job that even new readers will catch on quickly that Guy Gardner is a wiener and Salaak is a Spock-like logical being who can be pretty cold.

Ethan Van Sciver is no stranger to drawing these characters. Having the go-to DC artist for big events helps bring weight to this story. Since the Green Lantern Corps are so disposable, and the new world is so full of questions, it’s hard to say who will make it out of this universe alive. Who are the mysterious hooded characters with seemingly sinister intentions? Are the sinister-looking, giant super beings with seemingly good intentions actually bad guys as well?

This could be a fun ride, but I just get the impression DC is also trying to roll out another story involving one of their beloved franchises to see if it will stick, and may quickly mothball it if not. I feel like a lot of people reading this are old fans looking to see the other Lanterns get their moment to shine. While I believe in raising stakes, I also hope Tom Taylor isn’t going to make the Corps look like a bunch of pushovers. Also, maybe let some new characters get the spotlight while also not screwing with the characterization of the established ones. DC, I love the Corps so you’ve got me on board to find out!

I have a love/hate relationship with event comics. On one hand, I enjoy reading big, bombastic stories that we couldn’t see in a live action film. On the other hand, they get exhausting when they happen every other fiscal quarter. Axis was an enjoyable read, but none of that book stuck!  Fear Itself was an exceptionally crafted examination of mythology and, well, fear, but Thor and Bucky came back from the dead a week later. Infinity unleashed a Terrigen Mist across Earth that… Oh, OK, that mist cloud actually stuck around

When the last two Earths were destroyed, Doctor Doom (with the help of Molecule Man and a 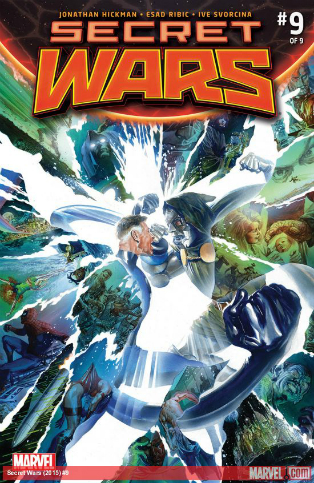 desperate Doctor Strange) stole ultimate power to save what he could of the Marvel multiverse, and dubbed it Battleworld. He also used that power to make himself a god. His first act as a god was to steal Reed Richards’ family and removed any trace of his longtime rival across all of Battleworld’s kingdoms. Reed Richards has since discovered this and he is very angry.

Secret Wars # 9 isn’t just the culmination of a mini series. Heck, it’s more than the culmination of Jonathan Hickman’s Marvel Comics work. Secret Wars feels like the last Marvel Comic in the way Crisis on Infinite Earths # 12 felt like the last DC Comic. Granted, it looks like the lion’s share of Marvel’s continuity is intact, but the issue itself focuses on one of Marvel’s oldest rivalries – Reed Richards and Doctor Doom.

The whole series has been leading to this confrontation. Jack Kirby and Stan Lee’s Fantastic Four run gave birth to the Marvel Universe. They’ve always been important to the fabric of Marvel. Doctor Doom’s presence has been felt all across the Marvel Universe since his first appearance in Fantastic Four # 5. The only person who ever has a chance of stopping Doom is Reed Richards. Their battle through this issue underlines that importance. It’s as much a physical battle as it is a war of words and ideals. Doom and Reed literally fight over who would make a better god!

In the years since Marvel’s become a Hollywood juggernaut, their first family have fallen more and more by the wayside. Secret Wars # 9 leaves the Marvel Universe in the care of Reed Richards, Susan Richards and their children. There are no more Fantastic Four. Hickman and Ribic give us clues as to what’s different – Peter Parker and Miles Morales are Spider-Men in the same New York City. Ben Grimm and Johnny Storm are still alive and will have to follow their own destinies beyond the FF.

Then there’s Doom. Victor Von Doom still lives in his castle, though the Latverian monarch is a changed man. Whether that change is for better or worse remains to be seen. Marvel’s cornerstone is gone for a while. It may not be a permanent change, but I can’t help wonder if all of this has to do with Fox owning the movie rights and their last cinematic outing was a financial and critical failure .Secret Wars # 9 is a fun comic for longtime Marvel fans, but it’s ramifications are bittersweet.