What are we supposed to do about comic book movies? The Marvel-patina is wearing green, showing that even the shiniest of universes can start to feel a bit cheap. The same formula spat out over and over again is unlikely to create something new, so studios are looking for ways to keep audiences in seats. To keep movie-goers happy. Make it a heist movie! Bring in an interesting director! Let Ben Affleck direct himself! With last years Deadpool, itself a middling if filthy take on the standard formula, they hit on the trick. What if they just made it rated R?

Enter the newest X-Men movie, Logan. From the opening expletive laden line, to the limb-excising fights, and on to the bleak post-apocalyptic outlook, Logan is desperate to be anything but an X-Men movie. It wants to be taken seriously, in with the big dogs. People whisper “Is this another Oscar contending superhero movie? Is this The Dark Knight?”

Logan is a bit like a little girl wandering around a perfumed closet, trying on lipstick and glittery stiletto heels, clumsily stomping around in costume jewelry before posing dramatically in front of adoring parents. The mom tells the little girl she looks like a model, like Marilyn Monroe. But truthfully, her lipstick is smeared up to her eyeballs and the shoes are inches too big. We are supposed to give Logan credit because it tried, because it’s better than its peers. But trying does not mean you succeed.

Logan is set in a dark future that looks near identical to our own, except for driverless semi-trucks. The world is grim, at least the parts of the American desert that Logan finds himself. The movie follows Logan, clearly near the end of his life span, taking care of an aging and demented Charles Xavier when his perfect plan for suicide is abruptly put on the back burner by the introduction of his unknown child and a comic book missive to get her to North Dakota and to relative safety across the Canadian border. There aren’t mutants anymore, you see. There have been no new mutant births, and the old guard have been hunted down or wiped out in the vaguely described Westchester Incident. Laura, his daughter, is part of a new group of mutants and their safety is only guaranteed far from the shady Mexican lab where they were conceived and brought up.

Logan is fine. If all you wanted from a Wolverine movie was to watch Logan slice through a bunch of dudes like a very fine set of Benihana knives, then you’ve got it in this movie. If you wanted sad looking Hugh Jackman looking scarred and grizzled and very angry and prone to screaming at children? Sure, that’s in here too. If you bought into the hype of a modern Western, something truly new? At the end of the day, this is still a movie about a guy with knife hands trying to bash his way through to the next baddie and deliver his package/girl/mission to the final area before facing off against a villain. This is not No Country for Old Men. This is not Cormac McCarthy. And for every step it takes away from the X-Men universe it seems to be avoiding, it still manages to have all of the plot contrivances and holes that seem to populate most of the X-Men movies. 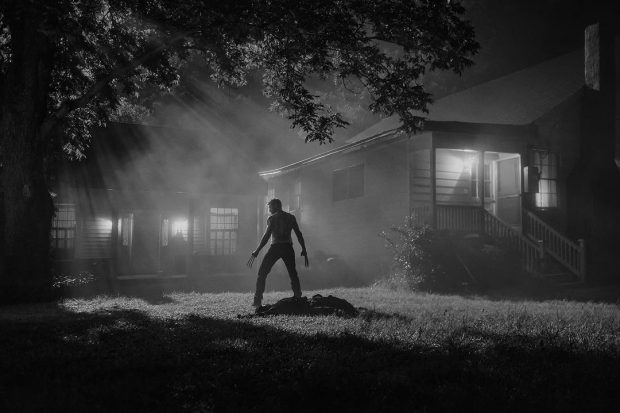 Like, why did they put an adamantium skeleton on a growing child? Where did all the other women go that were helping out with the escaped kids? Why do the super kids suddenly become unable to fight a mile out from their destination? Why is adamantium poisoning him in this timeline and no other? Did the caravan have no more green super serum? Why did they stay with the ranching family, when this would mean certain death? Why did Caliban switch sides to Xavier to begin with? The movie likes to drop these thoughts in, and then leave them dangling unanswered.

Logan seems to do a lot of things that darker, edgier movies do, but doesn’t seem to know why. Characters are introduced just so that they can die horribly. Men run into certain death simply so their brains can be splattered across the orange desert. Logan spits and curses and fights his way through the movie and we’re supposed to buy that he has heart because he comes to Laura’s rescue. The ending builds to an emotional climax it never earns because it never establishes an emotional core to its principal relationship beyond Logan and Laura’s genetic connection.

In 2013, there was a discussion about the “dadification of games,” following the trend of shooters BioShock: Infinite and The Last of Us, which had the player control a grizzled older man, somehow both played by Troy Baker with the same amount of alleged moral ambiguity and tough guy angst. Coined in an article from Mattie Brice, dadification was about grey leads whose selfish decisions negatively affect the world around them while their presence simultaneously infantilizes the teen girls they “protect.” Dadification is about dads as characters, as gritty emotional leads and about the ways they ultimately fail to protect us. The ways they ultimately disappoint us.

The father/daughter relationship that is seemingly top-billed is between Logan and Laura. When Laura is attacking, a wild ball of pre-pubescent rage, she snarls like an alley-cat backed into a corner. Wolverine himself is a character frequently defined by his rage: video game adaptations usually give him super strength and speed when he loses his cool. His anger is his fuel. It makes sense then that his daughter would act the same. What we are given in Logan is less a character study of Logan coming to care for Laura and more of a case for her genetic predisposition towards acting like him. She has read about the Wolverine before, she knows who he is and that he is her father, but by the time she finds him, he himself is frail. In the first showdown that features both Wolverine and Laura, she clears out 3 car loads of armed men and Wolverine takes down two. Not car-loads. Just two men. She has come to find Wolverine, but in his place she has found the broke down Logan. In this, we get the first disappointment.

Logan is not the smart-talking wise ass that he is in the comics she grew up on. He’s a hard-drinking, suicidal rage machine who is barely holding it together. He isn’t even the true hero of the film. Laura doesn’t really need him for survival. The true heroes of the movie are the unsung Mexican nurses who broke the children free from the hospital, who labored for men who thought them dumb and poor. These are the fearless women who most closely resemble the comic book superheroes Laura is expecting from Logan. For most of the movie, all Logan does is disappoint. Perhaps his least disappointing action, truly, is him dying. In this, he is pure. His sacrifice gives her life. His last words are not words of love or affection, they are an acknowledgement of his own mortality. In this, he mirrors Charles, who is given an opportunity to apologize to Logan as he is cradled in his caretakers arms, but instead gets an oddly optimistic comment about a boat.

The real emotion of the movie is the connection between Charles Xavier and Logan. After so many movies together, Patrick Stewart and Hugh Jackman have an established rapport. They play like men who have been working together forever, and they are the real father/child relationship in the film. Wolverine has always been the physically stronger of the pair, but before, Xavier had both the strength of will and mind to be a force for good. In Logan he is frail and ailing, a man whose brain is now an uncontrollable weapon and who has committed a terrible sin that he can’t even bring himself to remember. In this, Logan is tethered to him, unable to let the man that he loves like a father go, but unable to fully forgive him for the actions that have brought them to be alone in an abandoned water tower. In some ways he is punishing Xavier for an action he does not remember committing, but at the same time there is genuine tenderness when he lifts his aging body and cradles him to his chest, the way he takes bullets for him in gun fights, even though he is no longer indestructible.

It is why, when Xavier tells Logan that is he a disappointment, it stings. We don’t know the extent of what has happened at that point, but the audience knows that Logan is sacrificing and bleeding for Xavier. But Xavier is no longer in a mental state where he can truly recognize Logan, let alone treat him with dignity and respect. He is mean in his mental illness.

In these moments, we catch glimmers of the better movie buried beneath the final copy of Logan. With a finer edit, a cleaner cut, we could’ve had the brutal Western that those first trailers promised, Johnny Cash’s voice dripping blood down a dirty sink. What we ended up with was a passably competent bit of action, tossed with a side of mutant powers, and a few good performances.

Breath of the Wild is Great But Inaccessible