Last week was the first time I ever missed a deadline for Unwinnable.  It wasn’t because I was particularly busy.  I wasn’t ill or injured.  I simply could not force myself to sit through Adam Sandler’s Netflix exclusive “film,” The Ridiculous Six.  It took me about five separate viewing sessions to make it all the way to the end.

To put it mildly, it was not an enjoyable experience.

And while I am not Adam Sandler’s biggest fan, I do have a soft spot for the Western, and even for Western parodies like The Three Amigos (one of my all-time favorites) and, of course, Blazing Saddles.  The few bright spots in the movie were the ones that reminded me of those classics: the sing-along around the campfire, the painful confess of Terry Crews’s deepest secret—that he is technically black—to his new found brothers, who must pretend to be surprised.

These scenes feel like they are transplants from another, cleverer film, one that is invested in not simply re-creating the tropes of the genre but in taking them apart and looking at them from a different angle.  They are simultaneously nostalgic for the classic Westerns of old and a bit cynical about the romanticizing of the past.

The vast majority of The Ridiculous Six is neither nostalgic nor forward thinking, neither romantic nor cynical.  It is simply a different coat of paint placed over the typical Adam Sandler formula: gross out scenarios plus endless cameos equals… comedy?  As the guys over at Red Letter Media put it, there aren’t really any “jokes” in this movie.  Rather, the audience is supposed to recognize a former SNL cast member (Jon Lovitz, David Spade, Rob Schneider, Chris Kattan) or a B-level celebrity (Vanilla Ice, Blake Shelton) dressed up in old-timey garb and bust a gut laughing (although I will admit that Vanilla Ice’s Mark Twain was just surreal enough to elicit a puzzled smile if not a chuckle).

The same heist and rescue story could have taken place in any other setting from a Vegas casino to a futuristic spaceship.  Just substitute stereotypical Italian mobsters for the rival bunch of thieves, the Left-Eye Gang, or an alien creature uncontrollably pissing all over the place for the burro with explosive diarrhea.

In fact, the only aspect of the plot that couldn’t be lifted and placed down into any other kind of setting with very little trouble was also the most annoying one: Adam Sandler’s casting as the white orphan taken in by a Native American tribe who winds up becoming the Best Indian of Them All, 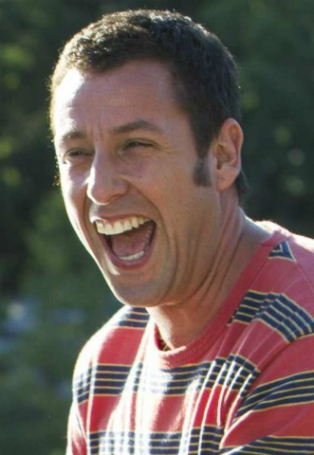 constantly engaging in what all of the other cast members refer to as “some mystical shit” to get himself out of a jam.  It felt to me more like lazy writing.  And, to several of the Native American actors and the film’s cultural authenticity adviser, it felt insulting, leading several of them to walk off the set in protest.  Netflix claimed that the racial stereotypes of Native Americans were intended to be understood as indictments of those same stereotypes, that

The movie has ridiculous in the title for a reason: because it is ridiculous. It is a broad satire of Western movies and the stereotypes they popularized, featuring a diverse cast that is not only part of—but in on—the joke.

As Megan Garber writes for The Atlantic,

these films give no indication that they are self-aware or remotely critical of the subjects they take on. They may deal, if tangentially, with serious topics… but they lack evidence of the intellectual infrastructure that is a basic requirement of satire.

In other words, the “hipster racism” never actually succeeds at turning around to look at the ridiculousness of the racists.  It is content to giggle at names for Native women like “Poca-hot-tits” and “Sits-on-Face,” or at the deep abiding affection of a Mexican (played by Rob Schneider, no less) for his donkey.

Thankfully, critics have resoundingly panned the film.  At the time of this writing, it somewhat miraculously has a rating of 0% on Rotten Tomatoes.  And yet, it has also been a ridiculous success for Netflix, who claim that the movie “has been watched more in its first 30 days on the service than any other film during its first 30 days.”  I have my suspicions.  The movie was recommended incessantly on Netflix’s front pages when it was first released, and “watched” doesn’t necessarily mean “watched through until the end.”  I can only hope that these statistics are the result of a public with a morbid curiosity sitting down to watch a train wreck unfold before them.

But I cannot even recommend the movie as a “so bad, it’s good” cult film.  It’s just bad.  It careens back and forth between boring and disgusting and stupid.  Go watch an old John Wayne western instead.  You’ll get a comparable amount of racism and sexism but with five times the charm and 1000% more competent filmmaking.

The Sound and the Fury – Rape Scenes and Westerns in 2016