I can forgive many of a work’s faults if they are in the service of ambition. No, Grant Morrison’s Infinite Crisis never quite gelled, but every one of its wild excesses and incoherencies – a structure nearly impossible to follow, an erratic pace that recalled nothing so much as a child flipping channels without rhythm or reason, a plot that seemed at times without any sense – was so brazen and exciting and of so grand a purpose that their ultimate failure to reconstruct the superhero genre as Morrison promised seemed, ultimately, beside the point. The loftiest of claims, the most sensitive of subjects, the deepest of themes, are so beyond the abilities of all but the greatest of artist that it scares the majority away. So rare is the fool daring enough to try at greatness that any such earnest attempt demands attention. 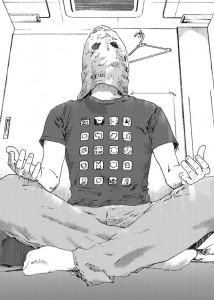 What is not so readily forgiven is ambition that announces itself and then never materializes, like a contemptuous rock star who goes on stage for a single song because the mere promise of his gracing the stage was worth the price of admission. Prophecy, written and illustrated by Tetsuya Tsutsui, announces its aspirations from its very cover. Even if the image of a masked internet activist ranting into a camera has become passe, it still carries powerful cultural cache, and Tsutsui has given it a striking update in the form of the newspaper wearing “Paperboy.”

Moreover, everything about the concept promises a socially sprawling treatise about the nature of crime and identity in our digital age. A group of anonymous, masked terrorists begin a crusade, targeting everything from abusive fast food workers to corrupt Diet members in a bid to “relieve” the downtrodden of “that pent-up resentment (they) feel.” In response, the denizens of the internet rise up in concert, as amused as they are emboldened by these new champions. And in response yet again, the newly inaugurated (and unimaginatively named) Cyber Force – led by the steely and brilliant Erika Yoshino – mobilizes to stop them all, with the understanding that the future of Japan is at stake.

But something goes wrong. The masked “Paperboys” who seemed a proxy for Anonymous and a million other hackitvist collectives reveal their disappointing true motivation: not a social revolution, but tricking the police into delivering the bones of a dead friend to his estranged father. All of the crimes of the system were, in reality, just, and unambiguously so. The members of the Cyber Force are shown not to be driven by a complicated sense of justice or even the desire for power: they work simply because it is their job. The series could have dug into this point, and showcased how this unquestioning attitude allows injustice to flourish, but it never bothers to. The members of the Cyber Force and their role in society are subjected to no critical examination, so much so that by the story’s end they feel like thematic bystanders who should have been relegated to the background. 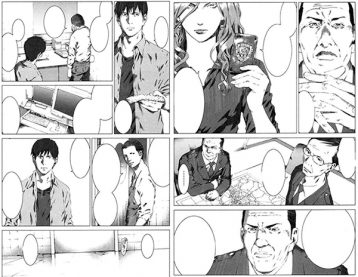 It isn’t clear if Tsutsui is incapable of going further or unwilling to push his plot and characters beyond the comforting structures of a police procedural plotline. It feels as if he invests nothing of himself in the story. Better yet, it feels as if he invests nothing much of anything into this story. The end result feels less like a revised Ghost in the Shell: Stand Alone Complex (which this series recalls in no small way) than an extended episode of Law and Order, complete with the same pat moralizing and trite characterizations that have made the latter an emblem of everything wrong with episodic television. Heck, one member of the elite Cyber Force is so clueless, you have to wonder if he was admitted to the team only to give readers the benefit of exposition.

It isn’t enough to just introduce controversial ideas or raise interesting questions and hope that they will lead to greatness. One needs the wherewithal to pursue a thread to its end, no matter how uncomfortable the journey may be and no matter what alien territory such exploration leads into. One has to shy away from pleasing answers and the morally unambiguous. A better Prophecy might have taken the tact used by Psycho Pass and given us a terrorist sympathetic – even correct – in their theory but reprehensible in their actions. A better Prophecy might have shown us something like the world envisioned by Terror in Resonance, a world in which there are no innocents. A better Prophecy might have predicted a future none of us had ever had the mind or the guts to envision, rather than showing us ground we’ve tread a million times before. All this Prophecy does is disappoint.