Heartthrob is an inventive twist on bank robbing lovers. In issue 1, we met Callie Bourdeau. She lived her life on the sidelines due to a debilitating heart disease until she was rescued by a miracle heart transplant. She returned to her ethically dubious 9-5, virtually unpayable medical bills and her loser boyfriend but something felt decidedly off. She started swearing and feeling desires she’d never had up to that point. It turned out her heart’s 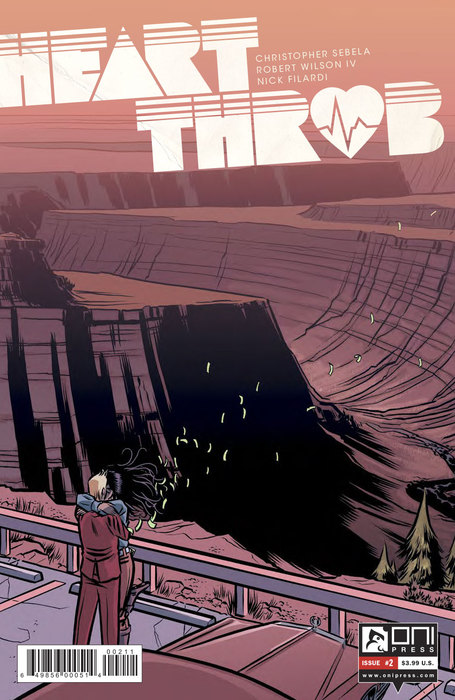 previous owner wasn’t quite ready to stop living yet. So here’s Callie, sharing herself with Mercer, a career criminal and he wants her to rob the insurance company that weaseled its way out of paying for her lifesaving surgery.

Callie falls in love with Mercer’s ghost and he seemingly falls for her too. Mercer’s a bit of a mystery. We only know what he tells Callie whereas Sebela and Wilson introduced us to Callie at her most vulnerable and, as readers, have been an intimate part of her struggles. The ability to write such a relatable character is one of Sebela’s greatest strengths as a writer. The high concept is what caught my eye but it’s character work that keeps me reading (just as it did in his mountain climbing thriller, High Crimes and the tragically canceled reincarnated assassins series, We(l)come Back).

However, that strong character building and intriguing set up mean nothing without a damn good artist to match it. Enter Robert Wilson IV! Wilson’s storytelling here is inventive without being jarring. There’s a two page montage sequence that reads as a dial. It’s an inspired layout that brings the reader full circle before turning the page. The flow feels natural and makes for a compelling read.

Christopher Sebela and Robert Wilson IV have a helluva heist comic on their hands. They spent the first two issues introducing Callie and Mercer. They’ve decided to rob Archway Insurance and they spent the second issue preparing Callie to do just that. Callie’s a fascinating character and I can’t wait to see where her new lease on life takes her (and whether or not this Mercer fellow is on the up and up or not).

Mike Mignola’s Hellboy universe has always been two things: an H.P. Lovecraft nightmare of supernatural horror attacking modern Earth, and a more wide-eyed idealistic golden age of good guys vs. bad guys in the past. This comic miniseries, as can be concluded from the title, falls squarely in the latter territory. In the Lobster Johnson corner of this universe the stories are free from most of the continuity that the Hellboy comics have to pay 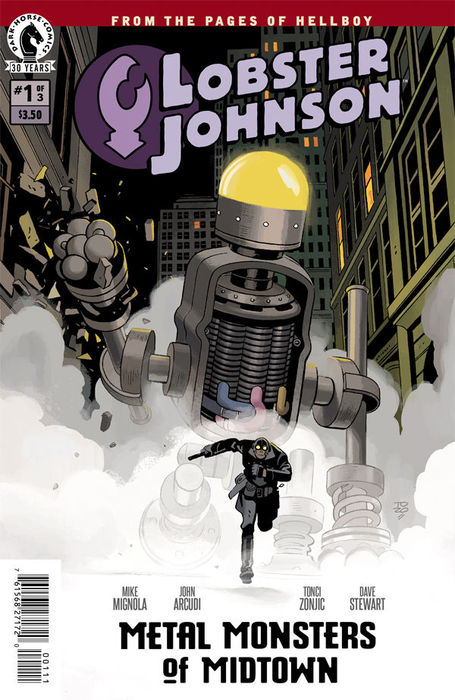 some attention to. Lobster Johnson is a character that can handle supernatural problems, go on espionage adventures, or in this case, fight giant robots. With this first issue of three we get a bunch of giant robot fighting, and it’s a good time!

Running out of the gate at breakneck speed, this first issue introduces the conflict right off the bat. Giant robots are terrorizing Manhattan, and the police are powerless against them. Even Johnson, with his more advanced military arsenal of explosives and experimental weapons, can’t seem to damage them. We are given a couple of clues as to what the nature of these robots are, and the cliffhanger at the end of the issue suggests that Lobster Johnson may not be around long enough to find out who or what is behind this. Writers Mike Mignola and John Arcudi have always been able to keep Johnson’s adventures as mostly neat and self-contained single issue stories, so it will be interesting to see what they do with a three-issue story arc.

Tonci Zonjic’s art in this issue is light and fun. His giant robot designs are great Art Deco designs that are perfect for this comic that takes place in the 1930s. For this miniseries we are seeing lots of wide-scale action shots, and Zonjic seems up to the task.

As for the characters, it helps that Lobster Johnson has a team that helps him fight the good fight, because the main character has always been kind of a vanilla. This is most likely an intentional throwback to the comic book and radio serial heroes of the 1930’s with a touch of noir. Details about Johnson are always provided more by the people around him rather than introspection. Johnson is a character that is defined by his actions more than anything else, and the fact that he was introduced as a hero revered by Hellboy helps define him as a man who transcended mortality due to his deeds. To drive home this heroic immortality, he even shows up as a helpful ghost later on in Hellboy: Conqueror Worm.

It will be interesting to see what Mignola and Arcudi have in store for Lobster Johnson and his crew of helpers in this series. Much like the flashback Hellboy comics these stories seems light and fun initially, but then you never know when some grim reminder of the fate of humanity as read in the present day story arc will rear its ugly head, figuratively and sometimes literally. I’m looking forward to finding out, as well as seeing some more giant robot fights!

Stop the presses! I didn’t hate DC Universe: Rebirth. In fact, I enjoyed it.

I was able to do something that’s increasingly difficult in our spoiler-saturated world: go into this book with an open mind and no expectations. When I can do that, I’m usually pleasantly surprised. I almost passed on Rebirth because it made my spider-senses of skepticism and mistrust tingle, but DC did the right thing by keeping the cover price low ($2.99) so I gave the book a chance. The “80 page special” is a misnomer, as we really get less than 70 pages of story and 13 pages of ads.

Rebirth has fairly well saturated the discussions of the various review/critique sites I visit, so I won’t spend much time recapping. Long story short, Wally “Kid Flash” West has been stuck in the Speed Force and wants to get out. He has a message: Barry “the Flash” Allen wasn’t responsible for the time disruption of Flashpoint and Allen didn’t cause the memory wipe that is the New 52. Some other mysterious force tampered with the Multiverse and stole 10 years from the lives of all who live in the DC universe. The only way West can prove this is if he gets someone to remember him, which will pull him out of the Speed Force.

Who would be so nefarious to do such a thing? Or, was this just the careless act of some all-knowing, all-seeing being? I accidentally came across a 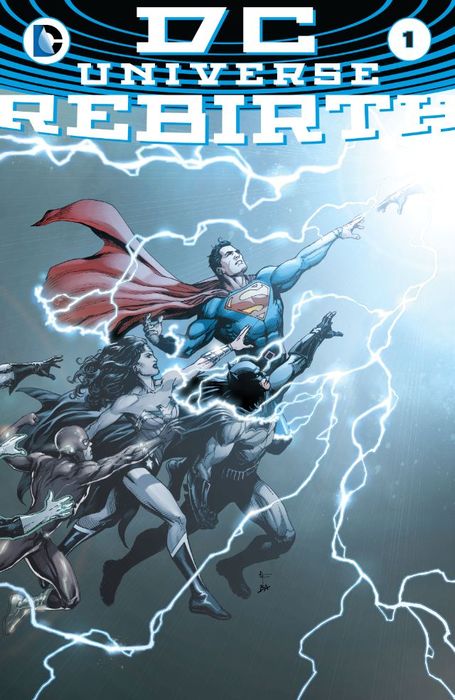 spoiler about the Watchmen–Rebirth connection, so now I don’t know if I would have picked up on some of the more subtle clues or if the spoiler put me on alert. I think the Watchmen nods were pretty obvious, but now I’ll never really know! At any rate, multiple articles I’ve read about Rebirth are pointing fingers at Dr. Manhattan as the man who stole time. Why hasn’t anyone mentioned Ozymandias? He’s the other side of the conversation in Rebirth‘s epilogue, the one who asks, “I did the right thing, didn’t I?” And he’s a bad guy.

So why is DC starting over after only five years of the New 52? I’ve always thought DC was going to pull some trick around issue #52 in the New 52, whether it would be pulling the plug if the experiment was failing, have some sort of wacky time-change that made the old and new DCs collide, or some other nonsense entirely. In the past five years, the world has seen Marvel run roughshod over DC, via their ever expanding film franchise (and also lots of exceptional creative teams,) so my superpowers of skepticism and mistrust are telling me this is DC’s attempt at putting their ducks in a row, with hopes that their movies and television shows do well enough that they’ll lead the comic books. I’d rather not see DC try to compete with the Marvel film juggernaut, but that’s not the world we live in.

Rebirth is a good idea, but it’s bound to take a dive in quality the more it gets fleshed out. This is inevitable in any expanded universe. Sometimes not knowing is better; it fires our imaginations and discussions. Often, seeing something to the end (or a prequel, like Watchmen) ruins the story (Star Wars expanded universe, anyone?) I’m sure individual stories, as well as DC’s greater story, will feel like they logically should end long before DC will let them end. Consider author Alan Moore’s words on DC’s insistence on expanding Watchmen: “It’s a finite series.” Despite the aura of crazy with which Moore surrounds himself, he is an astute reader of the minds of the businessmen who really run our comics world. Maybe Geoff Johns was the person who stole 10 years from the DC Universe?

The only DC books I buy and read regularly are Batman and Detective Comics, but Rebirth itself has me looking forward to greater changes (or the return of the old, more likely) in their universe. The choice of character focus is telling of who DC really values: Batman and the Flash. Superman got shorter shrift than I expected, but it appears to tie into his greater story line. I’m surprised at how minimally involved Green Arrow is, considering Arrow is currently DCs most successful show. Then again, I don’t read Green Arrow. I’m not happy about some of DCs books going to twice monthly, specifically Batman, as Batman minus Scott Snyder is the unknown (also twice monthly means we’ll see diminishing returns sooner.) I am intrigued about this multiple Joker thing. And why the hell is Aquaman going twice monthly? I refuse to believe anyone likes that ninny, let alone enough people buy the book for DC to think the world needs twice the Aquaman.

I’ve read more than a few critics’ saying they think comics are too dark, longing for days gone by where heroes made everyone feel all warm and fuzzy. Do these people long for the days when every sentence ended with an exclamation point? When every character’s thoughts were said aloud? Where in each issue every character had to remind us what their super powers are? I say f#$% that! Those people probably enjoy Aquaman comics.

I’ve read a few reviews of Rebirth and there seems to be a universal idea that it’s really a meta-critique on the state of DC. I’m not sure I wholly buy into that theory, but I don’t wholly discount it either. I’m not sad to see the New 52 initiative go away. I’m not ashamed to say that the New 52 initiative got me back into monthly comics (before that, it had been at least 10 years since bought any one title regularly.) What kept me going was the quality stories of a Scott Snyder, a Grant Morrison, a Peter J. Tomasi. Quality is job number one (maybe someone should use that as a catchphrase?) So I remain skeptical, and challenge DC to keep me interested. There’s plenty of competition for my money out there.

Eye of the Beerholder Episode 9.5 – Nine and a Half Geeks