Communicating with other human beings can be tricky. Face to face, you have to worry about posture, positioning, body gestures, facial cues, tone and a hundred other little nuances that convey as much meaning as our words themselves. Online, it gets even more confusing. Think of how difficult it is to express sarcasm or differentiate between enthusiasm and horror in the textual confines of social media. The absence of visual and aural cues to contextualize what we’re saying leads to uncertainty and miscommunication; how many times have you gotten hung up over a nefarious ‘k’, trying desperately to figure out whether the other person is being intentionally short with you, or is just in a rush?

Thanks to the ubiquity of social media and the impersonal, drive-by nature of so much communication these days, it’s more important than ever to be aware of not just the intentions behind the things we say, but the potential inferences, too. The two are not always one and the same, as my recent playthrough of 2064: Read Only Memories has reminded me. A point-and-click adventure game in the vein of Snatcher and Policenauts, Read Only Memories is set in Neo-San Francisco, a city in the midst of an existential war between ‘regular’ humans and those who have undergone genetic or cybernetic augmentation, growing bunny ears or replacing their eyes with computer optics. Much of the game revolves around the question of what it means to be human–not the most unique premise in science-fiction, but a robust one, nonetheless. 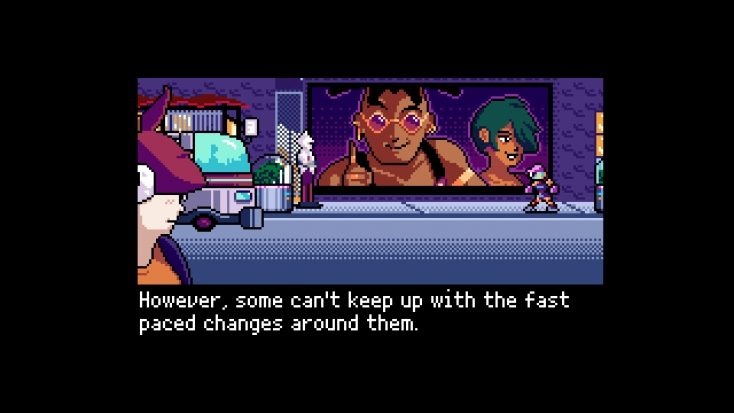 What sets Read Only Memories apart, though, is the subtle ways it encourages you to think about identity as a two-way street. Projecting a particular identity is only one part of the equation; for it to feel legitimate, it must be recognized by other people. For example, at the start of the game, you’ll pick a preferred pronoun for other characters to address you by: he, she, they, ze or xe. This is a wonderfully inclusive option in itself, but what really stuck with me was seeing and hearing non-player characters refer to each other by these various pronouns. For instance, one of the characters I met early on sported a stylish pink-and-blonde hairdo and a Southern accent with a distinct feminine lilt. My brain immediately concluded this character was a ‘she’, and that’s how I mentally gendered her. It wasn’t until later, when another companion referred to the character deliberately as ‘they’ multiple times that I realized my mistake. In the diverse social landscape of Neo-SF, just as in modern society, identity means so much more than the biological body you’re born into.

This is a lesson I’m taking to heart. Applying the wrong pronoun or inadvertently using a deadname is far from harmless; it is a denial of someone’s identity, refusing their right to be who they want to be. Even if there’s no malice to it, intent is only part of the social equation; words carry weight, whether we want them to or not. Through its emphasis on inclusivity, Read Only Memories has shown me that identity is as much about recognition as it is appearance. If I want others to see me for who I want to be, I need to make sure I see them for who they want to be, whether that’s she, he, they, xe, ve, or anything else they identify with.

It’s too easy to assume, and even easier to be an ass.

How I Almost Gave Up On Games
Previous Post