It takes a moment to place the surroundings. There’s a lot of people in white coats. Why am I so hazy feeling? That’s when it all comes back. I’m not really from this time. Someone from my time has come back to this era and changed the course of history. My job, and my comrades, is to find and stop this from happening. Fortunately, T.I.M.E. is on our side.

Welcome to T.I.M.E. Stories, one of the strangest, most interesting games out there. What might sound like an old Quantum Leap episode, is the entire crux of the game – jumping back in time to make sure things go the way they should. You take on the role of an agent being sent back to investigate and finally alter the events that led to the breakdown of the timeline.

Before we go much further, I feel I need to mention that the entire trick to this game is not knowing what’s going on when you first play. This is the deciding factor for many gamers – whether or not a game with limited replay is worth the price. I plan on tackling this question long form below, but in short, I believe it is. The other side of this statement is that I can’t really describe a ton about the game without ruining the experience, so this review will be purposefully vague on certain points. However, the game mechanics remain the same, only the scenario changes.

T.I.M.E. Stories comes with enough wooden pieces for four players, a board, wooden pieces for use on tracks and a deck of cards. Of all these pieces, the deck of cards is the most important. It comes sealed, with a blank on bottom as to not ruin the surprise, and you only open it when you’re ready to play. Once unsealed, the deck contains everything you need to play the game. 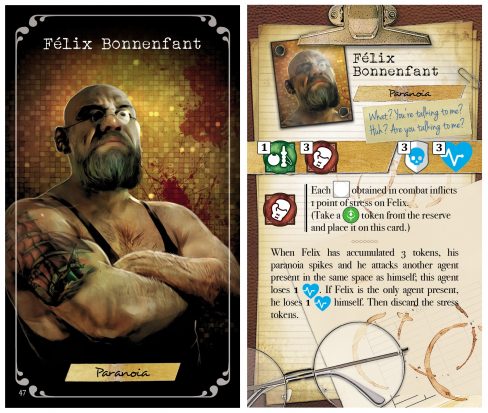 The cast of characters available in the first case, included with the base game, are interesting. I don’t believe I’m giving much away by saying your first case is set in an asylum in the early 20th century. The characters include a crazy little cannibal girl, a strong man, a coke head and a few others. Each of these characters were designated as being unimportant to the timeline and can die or disappear without ending the world.

The one major conceit of this game is that you shouldn’t be able to solve any case on your first attempt. You have a certain amount of Time Units that are used by your actions. If you all die or the TU runs out, you fail and get shot back to the agency. This isn’t the end of the game, however, as, well, you control time. The idea being that each time you return to the asylum; you return with the knowledge you gathered on your last run. You don’t even have to stay in the same character, you can choose a different vessel each run.

So what is in the deck of cards other than the characters? Lots and lots of stuff. Most importantly, though, is the locations. There’s an overall floor plan that gets laid out in the corner of the board, and when you move places, you move as a group to the chosen location. When you visit a location, you lay cards out on the board to make a sort of wide-angle shot of a location. On the back sides of these cards are the interactions you can have, but you have to physically be in that part of the room. You’re not allowed to show people the backs of the cards, or to read them verbatim, you’re supposed to describe it as you remember or as your character would tell them. This can lead to some… interesting interactions. 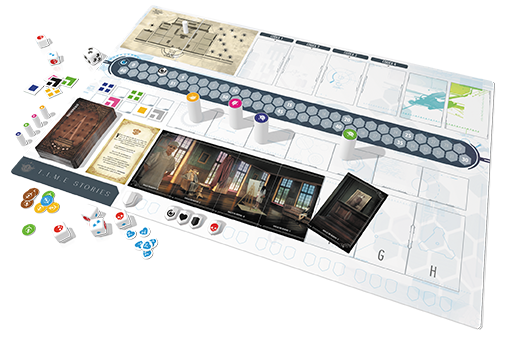 Another interesting location interaction is when certain areas or characters have lock symbols. As would make sense, certain events have to happen before others can happen. When you trigger one of these, you get a little piece that signifies that you’ve completed the pre-requisite. If you have that piece, you can then open these lock cards. The way these play out make the game into an intricate puzzle.

Most of the things you acquire during a playthrough of T.I.M.E. Stories don’t stay with your characters, but there are a few exceptions. For instance, if it’s not a locked area, you will get to keep the map update which is represented by your knowledge of the new area. So, the next time you play, you can go straight to a place you learned about last time, as long as it isn’t locked by an event.

That’s the basic ins and outs. The story unravels over several plays, with a better ending to the case for solving it sooner. Either way, it’s a very memorable experience… but is it worth it?

At the end of the day, whether T.I.M.E. Stories is for you and your group depends on your approach to gaming. Do you like to buy a game and play it to death? If so, this might not be the game for you. The expansion packs, in the forms of new card decks, are relatively cheap for the board game world, coming in at $29.99.

Whether or not several hours of board gaming are worth that, is up to you. I believe it is. T.I.M.E. Stories made quite the impression on me and I can’t wait to play the next chapter. I’ve played a lot of games over the years, but none of them have been like this – a tangible feeling of adventure. It’s a sense of the unknown in a cardboard box.

Check out Unwinnable Presents: McMaster\McMaster for a peek at our inaugural go at the Asylum mystery!