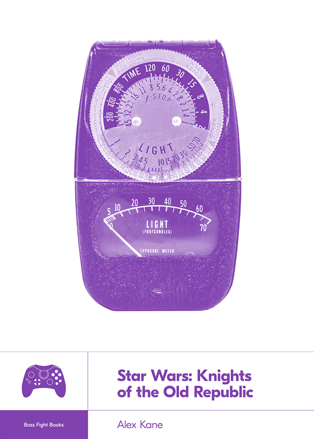 Few games are as foundational as Star Wars: Knights of the Old Republic. Despite being an Xbox launch title and a license tie-in no less, it resulted in a tectonic shift for roleplaying games thereafter. It opened the door to thousands of stories inspired by the design and writing of Bioware’s team, but one tale has gone relatively untold – that of BioWare themselves, and how such a game came to be.

Boss Fight’s new book by Alex Kane dives into this story with gusto, touching on deep reveals series fans will love, while keeping it digestible to more casual readers. Even if you don’t know the difference between a wamprat and a gizka, there’s a touchingly human tale inside. Candid interviews with several key staff at both BioWare and Lucas Arts help paint the picture of an ambitious, small, young team daring to take on nigh-impossible challenges. As fitting a story for Star Wars as ever. It’s a story of quick thinking, technical achievement and a major step forward for the Star Wars Expanded Universe (now, the Legends timeline).

It’s as much an oral history as it is a tribute to why so many people, franchise fans or not, love the game. As a result, it delves heavily into several key spoilers, but this comes with the bounty of learning about several pieces of cut content; anyone wondering about the fate of Sleheyron will be quite pleased. There are asides touching on voice acting, the art direction, how to simulate cinematic combat with dice-based systems and the gamble for BioWare to try and make a fully 3D RPG.

Everything’s presented smoothly, every sub-story rolling in just soon enough to ensure the pace is never dull. In truth, I read most of the book in two sittings. It helps that Boss Fight’s books don’t tend to be too long, but regardless, the easy reading is appreciated. What could’ve easily been more technically inclined or unfocused by just how many story threads there are is instead one of the better books I’ve experienced in a while.

The main trick is that I don’t want to give too much away, which may be one of the best compliments I can give to this retrospective. Where so many Star Wars games in particular have their back stories and secrets told in dead forums or obscure YouTube videos, Alex Kane brings one of the grandest tie-in games of all time down to earth, making it all the more amazing such a game was ever achieved. In a world where it seems like game development is fraught with trials and tribulations, it’s a story of hope we really need right now. I’m grateful to have had the opportunity to have read it.

Resurrectionists Gone Wrong: The Tale of Burke and Hare, Part 1