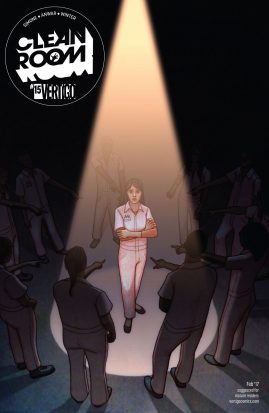 The wonderful thing about last week’s Clean Room was that it takes a break from the rest of Clean Room. I’ve been critical of that impulse before but Gail Simone does it right. Normally I bemoan what feels like filler issues but there’s nothing filler about “All the Pretty Edges.”

Billed as an interlude, “All the Pretty Edges” doubles down on the general Clean Room premise and is all the better for it. A young woman’s husband dies tragically. The husband has an infatuation with Astrid Mueller and he books. Eventually, the young woman finds her way to Astrid Mueller, to the eponymous clean room, and faces her greatest demons.

But Simone takes this otherwise unremarkable character and weaves a remarkable story around her. Clean Room can be exhausting at times. The bleak demon infested world of pinkish hell monsters more than holds but it’s hard on the spirit at times.

“All the Pretty Edges” is not a breezy read by any standard but it is a complete story with its own twists and turns. There’s no cliff hanger, no
scales to be tipped, no massive reveal at the end that changes everything. It’s a tight story about a type of traditionally nameless, faceless
character. What’s more is that it’s a kind of synecdoche story that really, really works. I mean it’s just great. I groaned when I first read
“interlude” but I may have actually apologized out loud by the time I got to the end.

Over the last several issues we’ve seen Astrid Mueller soften a bit. After this issue, I’m ready to see that Astrid may actually be the emotional
center of the story, if not an emotionally centering force. Chloe might be the most emotional character, and she’s perhaps the most moral, but with only a few lines in the entire issue, Astrid reveals herself to be much more than an icy, at all costs, savior.

“All the Pretty Edges” also looks different. Sanya Anwar and Quinton Winter really set this issue apart from all the others. Anwar and Winter don’t just do their best impression of what Clean Room should look like, they make it theirs. And it still looks like Clean Room but the faces are different. They’re differently expressive. The colors all pop, the lines are sharp. There’s nothing gimmicky with the panels, no indulgent flourishes, just a beautiful book with a perfectly small story. 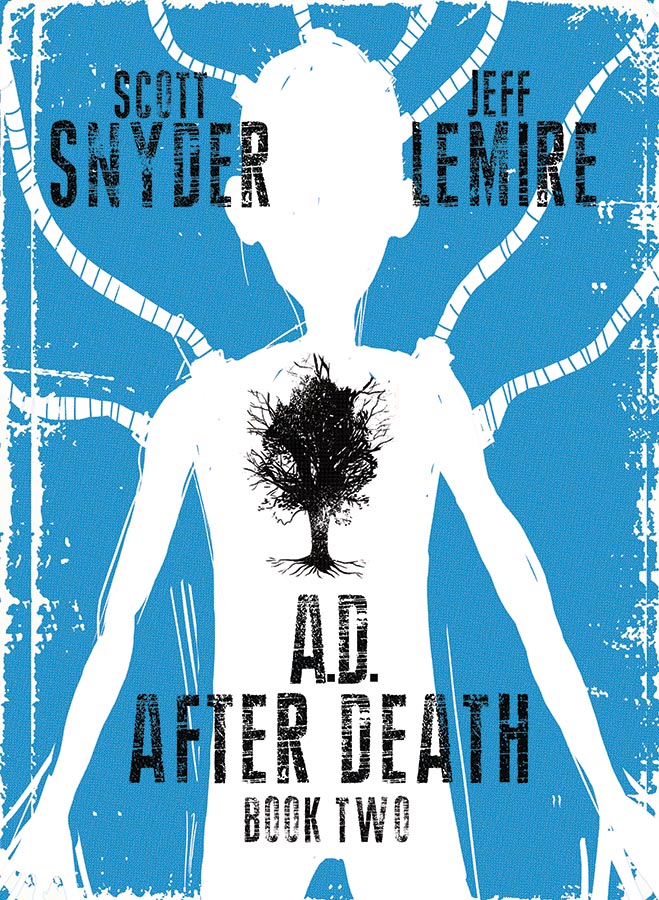 I’m a few weeks behind in my comics reading, what with the holidays, work and life in general, but I wanted to make time for A.D.: After Death #2 as soon as I picked it up. Issue #1 set a compelling stage, the kind of anticipation where I couldn’t wait any more time than I have to to read the next issue.

One of my long-standing complaints about reading comics is that so many are over before they start. I can breeze through an average 20-something page issue in 10 minutes, even when stopping to appreciate the scenery. After Death #2 took me an hour to read, time already spoken for by so many other responsibilities, but it was time well-spent and a needed reprieve from my busy week.

Issue #2, like #1, switches between book and comic book, but leans more heavily towards book in this installment. We get more history on Jonah Cooke and how he’s developed a second career as an amateur thief. We meet Warner Errant, billionaire music producer with his own second career as a master criminal, and see how Errant inserts himself into Cooke’s life and extra-legal hobbies. And we see the day that Cooke “discovers” the cure for death, although what good this cure actually does for humanity is still pretty hushed.

At this point, the cure seems more of a who than a what; less a scientific formula than a living thing. There seem to be downsides, in that in these “cycles” characters mention, people aren’t able to recall memories from previous “cycles.” So are these ostensible life cycles much different from the life of old, when death was the end of things? Some characters mention a book that Cooke has written, but what this book is (memoir, science?) isn’t yet shown. So I’m left with this takeaway: is the search for a cure for death a humanitarian one, or is it the work of a rich old man who doesn’t want to die and has endless resources to devote to said search?

Writer Scott Snyder has drawn us in with a seemingly simple premise (what if we lived in a world without death?) and complicates things wonderfully. As with many of Snyder’s other work (Batman, American Vampire) his artistry is in the long game. Jeff Lemire’s drawings are understated and emphasize the power of Snyder’s writing. Lemire’s use of watercolors and muted tones creates a dreamlike, ethereal world. What may look simple at a quick glance isn’t. There is a lot the creative team asks for from the reader, and it will make the end result more rewarding.

There are several beautiful, heart-rending scenes in issue #2, but most resonant is when Cooke and Errant meet to discuss Cooke’s primary job: listening for report from the lost Forager mission. The two watch an orchestra play and Errant describes to Cooke what powers music can have, like freezing time for someone or evoking memories for another. Errant talks about how songs of a similar structure can cause widely different feelings and emotions, and these thoughts and emotions can change with each listen. Visually, the scene starts as a back and forth dialogue, but as the discussion gets increasingly tense, Lemire brings the music to the fore, with Errant’s words coming off the sheet music, and you feel the music overpowering the conversation you’re reading. Then as Cooke loses his cool with Errant, you’re snapped back to the present and the music fades to the background. Powerful stuff.

After Death will close next month with issue #3. There is real power in a limited mini series. Some questions will be answered, some maybe not, but as After Death shows, life is lived even in the presence of the unknown, and sometimes the unknown is best left to our imaginations. 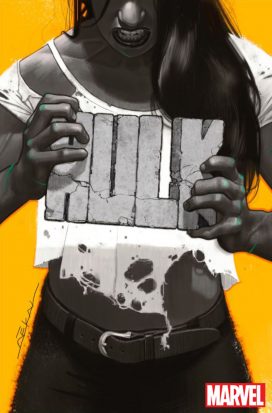 I grew up in a John Byrne Sensational She-Hulk world. Jen Walters was in full control of her alter ego. She was a superhero and had a helluva sense of humor. She was a longstanding member of the Avengers and starred in the damn funny Dan Slott penned She-Hulk series. Jen is a fantastic character and when I read that Mariko Tamaki (This One Summer) would be writing her, I got excited.

Hulk # 1 picks up in the wake of Civil War II. Jennifer Walters is out of her Thanos induced coma only to discover her cousin, Bruce Banner (the Incredible Hulk himself) was murdered by Jen’s old teammate, Clint Barton (Hawkeye). In the interest of full disclosure, I stopped reading Civil War II pretty early on. It was boring. Marvel’s last event centered on Doctor Doom acting as god over all that’s left of creation. He turned Ben Grimm into a wall. An Infinity Gauntlet powered Black Panther and God Doom had a throwdown for the remains of existence! That’s some heavy big idea event stuff right there. Iron Man and Captain Marvel getting mad over a Magic 8 Ball is a pretty damn trivial event in comparison. But hey, CWII was a big seller so what do I know?

Civil War II did leave Jen Walters in an interesting place though. Hulk # 1 starts with Jen returning to her work as a lawyer. Aside from a reference to Hellcat, we don’t see any of Jen’s previous supporting players. Hulk # 1 takes its time exploring Jen’s PTSD. She’s awake, but the Hulk is no longer integrated into her personality – it’s trapped inside her and if Jen’s smashed elevator buttons are any indication, the Hulk wants out!

Tamaki’s script and Leon’s art are building a longer story. This issue feels more like the first chapter of a graphic novel than it does a piece of serialized comic book. Jen’s frustration with the world and her inability to fix it the way she wants is slowly boiling inside of her. She goes to work as a lawyer and fights for the little guy. Most of the first issue deals with Jen taking on a housing case, protecting a woman who is either an Inhuman or a Morlock from a greedy landlord. She struggles to remain composed throughout the issue and we only get a glimpse of the savage beast within her and it’s a pretty terrifying visual. I can’t wait to see Nico Leon’s full Savage Hulk!

Until then, I’ll stick around for the character work. It’s a solo-series, not a blockbuster event. Give me the character development and build that tension. The Hulk hasn’t been scary in a long time but Tamaki and Leon’s Hulk # 1 made me dread Jen’s inevitable transformation.

Office of the General Counsel Episode 12 – Attack of the Clones