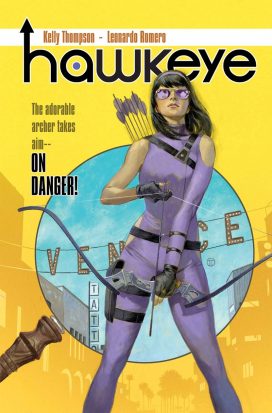 When Marvel announced a new Hawkeye comic starring Kate Bishop written by Kelly Thompson with art by Leonardo Romero, I was all in. When I realized Kate was heading back to California, I pre-ordered the book right then and there. Kate Bishop is the shit and has been since her first appearance in Young Avengers # 1!

Kate’s defining character trait has always been moxie. When her friend’s wedding gets taken hostage by five goons with guns, her first instinct is to take on the kidnappers and she joins the fray when the Young Avengers show up to rescue the wedding party. After the rescue, Kate tracks the teen heroes down and declares she’s joining the team. While she didn’t have the code-name on day one, she was birthed into the Marvel Universe fully formed, with the same attitude of her eventual partner, Clint Barton.

One of my favorite parts of the Fraction/Aja Hawkeye was how it brought Clint Barton and Kate Bishop together (only to split them apart…and then get them back together for Hawkeye: Rio Bravo). During that 22 issue and an annual joy of a run, Kate and Pizza Dog leave Clint and head to Los Angeles. There, Fraction and artist Javier Pulido and Annie Wu riff on a whole bunch of fun LA private eye tropes and references. They pit her against Madame Masque and tie the story to the Tracksuit Draculas back in New York. Hawkeye was a helluva run. I couldn’t bring myself to read the Jeff Lemire and Ramon Perez All New Hawkeye (the wound of the Fraction, Aja and friends leaving was too raw) but I continued reading Kate’s adventures in Kieron Gillen and Jamie McKelvie’s Young Avengers. She was literally running through comic panels in that book and she was dating inter-dimensional Kree hipster, Marvel Boy. It was a blast of a book, but it wasn’t street level like in Hawkeye: L.A. Woman.

In Hawkeye # 1, Thompson and Romero move Kate to Venice Beach. She is still the whip-smart impresario she’s always been. She’s not living in a trailer on the beach this time. Now she has her own office/home. She’s still working on the Private Investigator License but hey, why can’t a superhero have an office? Thompson and Romero spend the first issue establishing Kate’s new status quo. She’s starting from scratch here so no one’s come back from L.A. Woman just yet. Kate takes her first case, helping a college woman who’s being heavily harassed online. Hawkeye follows her instincts and solves the case. Well, she solved part of the case. There’s something nefarious afoot in Venice Beach and it’s up to Hawkeye to solve the crime.

Thompson’s script is tight. She gets Kate’s spontaneous spirit that will lead her to all manner of derring-do. Romero’s art compliments the script perfectly. His clean lines, well-paced panel structure and dynamic action sequences remind me of Aja and Wu, but the true test of a Hawkeye artist is character work. Romero kills it! Kate’s range of emotion throughout the issue is fluid. The art doesn’t feel exactly like a superhero comic – it’s a little more. It’s not quite to the Fraction/Aja Pizza Dog issue (no one’s that good), but it’s damn good!

Hawkeye # 1 may not make my Best Of list for 2016, but I have high hopes for 2017. Kate Bishop rules and she found a creative team that get her. That’s a recipe for some damn good comics!