Joe Harris has the episodic format down.

What’s most evident in issue #6 of IDW’s X-Files: Season 10 is that Harris knows how to craft the hook, the development and the cliffhanger – all of which are solid and engaging, making this issue the best yet. 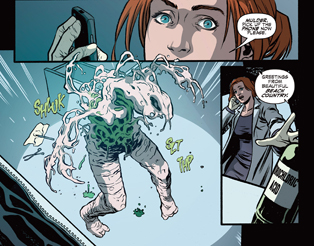 Harris delivers a clever and organic segue that brings Mulder and Scully back to the X-Files, the pretense of which seems simple at first, then unbelievably smart on further inspection. Harris has found a way to bridge the old series with the comics in a way that transcends the characters who occupy both, but while still paying homage to the series.

His story, about a creature known as the Flukeman, puts all the necessary pieces in place, bringing readers up on the monster’s connection to the mythos and establishing an arc for the next few issues. The tale is tightly plotted and moves at a quick clip while still dropping gripping mysteries in its wake. The buildup to the final page is impressive, and the cliffhanger will definitely bring readers back for more.

Additionally, Elena Casagrande and Silvia Califano provide some lush, eye-catching art. The contrast in style from the previous issues is immediately apparent, and the change in the artistic team gives a newness to the comic, particularly in the opening moments. Where the art struggles, though, is in faces. Character affect is stale, and not much emoting is conveyed through expression. But the smoothness with which the images are rendered is hard to ignore, nor is its immediate appeal.

Given Mulder and Scully’s renewed focus in The X-Files, and the cleverness with which Joe Harris has constructed their return, the series has set itself up for a long, exciting run. I only hope that the remainder of the issues can keep this excitement going. 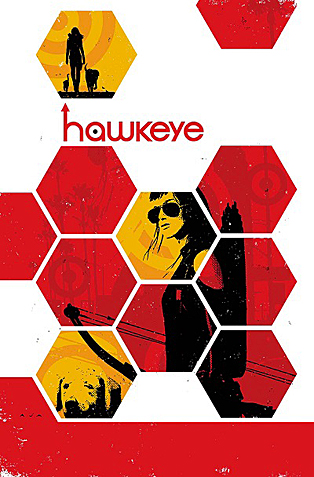 God, I love Hawkeye. Few books and few writers can make secondary and tertiary characters as interesting as Matt Fraction can. I hate to keep heaping on the Fraction love, but the guy is really good at what he does.

This month, he’s joined by Annie Wu, and the duo pen a tale of Kate Bishop, the “other” Hawkeye, and her attempt to escape Clint Barton’s chaotic and dramatic life. So she takes his dog, Lucky, and heads out to California hoping to establish herself as a private investigator of sorts.

Things don’t work out that easily for her, but Remender and Wu use both humor and humanity to make Kate as appealing a lead as Clint. The characteristic Fraction wit is on full display, and the writer’s quirkiness is more pronounced than usual.

The story is pretty simple: Kate wants to find an orchid thief in order to help a couple out on their wedding day. But things are not always what they seem. Kate stumbles upon a much bigger crime than she originally intended, the depth of which isn’t known until the final page, but one which is wonderfully crafted.

Matt Hollingsworth’s art is also part of the success of the comic, as his facial features are where half the humor lies. Fraction and Wu’s dialogue and storytelling are good; Hollingsworth makes the issue great. He hits all the humorous beats with aplomb, and it’s hard not to find yourself laughing out loud at Hawkeye this month.

This comic is always a treat, and the way it’s kept its uniqueness is what’s most impressive. Each issue is better than the last, and it’s easy to see why Hawkeye is a fan-favorite read each month.

I’m hooked on the series. If you’re not reading Hawkeye, what’s your excuse? 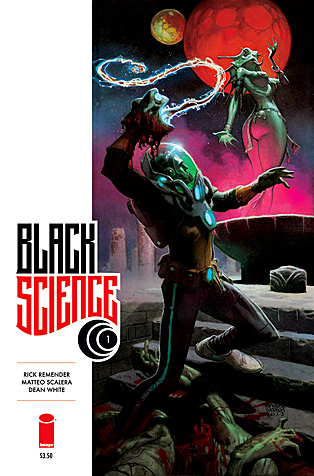 Bannen’s Book of the Week: Where do I start?

Black Science is Rick Remender’s masterpiece of science fiction, adventure, mystery and giant frog men. Crafting a world of such utter originality is both breathtaking and deflating, as reading Black Science made me aware of the type of writer I could never be.

But at least I can enjoy Rick Remender.

Telling the tale of an alternate-reality-jumping anarchistic scientist named Grant McKay, Black Science focuses mostly on solving its initial problem of a providing clean water for a “pillar” so that it won’t explode and kill all of the nearby inhabitants, including McKay’s own children.

But where the issue finds its originality is in the world Remender creates. Towers are built upon the backs of turtles; giant frogs shoot electric tongues from their gaping mouths; warring factions of amphibian-like creatures battle among the mysterious tropical world on which we first meet our hero.

And Grant McKay is a great lead. He’s intriguing, heroic, unafraid and loaded with secrets. Following Remender’s crisp, succinct and often choppy narrative is mostly engaging and rarely tedious. The abruptness of McKay’s thoughts makes reading the comic a quick experience, perfectly aligning itself with the action occurring on every page.

Plus, the art is one gorgeous visual after another. Matteo Scalera’s arcane, yet visually intriguing world is a thing of beauty. The sharpness with which he crafts the visuals brings every image to life, and the illustrations are reminiscent of Billy Tan’s work on Uncanny X-Force – another Remender production.

Dean White’s painted art is what makes the book the visual treat it is, as every page is layered with detail and glowing with colorization. With art like this, each month of Black Science is going to be worth the buy, if only to look at it.

Being transfixed by a comic is a rarity these days, particularly one that fits into so many molds: science fiction, action, adventure, philosophy. Black Science is the next Saga, a book of such utter uniqueness that its very existence is enough to keep the death of the comic book at bay.

I need other people to experience this as well.

Pick Up Anything of Use