I would never recommend Serial Experiments Lain to a viewer unfamiliar with anime. The show is an oppressive one: the colors are muted, the soundtrack mostly noise, the backgrounds claustrophobic, the cyberpunk aesthetic bearing none of the stylish noir sensibilities that make something like Blade Runner just cool enough to be accessible.

I also don’t think I’d recommend it to those few friends of mine who actually do like anime. The plot is so haphazardly paced and developed that most episodes barely seem to connect. They feel like they were left over from an earlier draft of the show. There seems to be a hole at the center of the story. The characters are so thin they almost don’t exist; the heroine, Lain, is a blank. Worst of all, it’s an unapologetic look at suicide that disturbed me like no other work on the subject has.

Which is probably why I loved it. It’s not the fact that it deals with the subject that won me over. Suicide isn’t uncommon ground for an anime to cover; this year alone saw the release of Orange, a production many have lauded for its handling of the subject but which I couldn’t stand. What swayed me was how well Lain conveyed the emotions that are attendant with and eventually lead to such an act. Lain’s emptiness isn’t laziness on the writer’s part or a well-worn literary device allowing for easy projection onto the protagonist: it’s representative of the depression she experiences as somebody with nothing to offer the world, a feeling which, in turn, drains her out so much that she truly does end up with nothing to offer. So she hides in her room all day plugged into a world-wide information network the show calls The Wire and drums up a false persona and a false life in pursuit of something fulfilling. Something to give her worth. 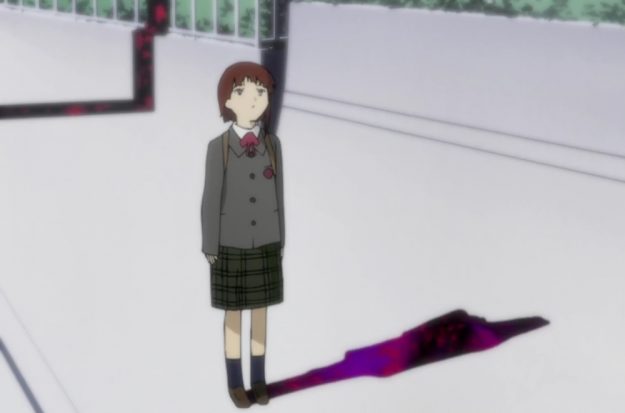 Because the truth – or at least the truth as I’ve lived it these last two harrowing years – is that often the thing pushing a suicidal towards the brink is their own sense of worthlessness, the understanding that the only impact they are capable of is the pain they cause others. Conversely, the one thing holding them back is the knowledge that their self-termination would only cause more of the same harm they’re trying to prevent. It would only confirm that they truly were the low-life they’d always suspected themselves to be. It is for this reason that Lain can only fully commit to erasing herself from history and memory after Alice, her only real friend, pushes her away in disgust at the beginning of the penultimate episode. Alice’s rejection has absolved her of any guilt.

At least now she’s no longer capable of causing pain. At least now she can do as she does in the opening credits and walk away from it all without incident. If she continues to exist it is only as a ghost, literal noise in machines. If memory is reality, as the series states time and time again, she’s finally put an end to herself. She’s found a way to make herself truly, finally worthless, and in doing so has finally escaped the pain that made her life hell. Which is about as stark and beautiful a metaphor for suicide as I’ve ever seen.