While the previous issue of Hawkeye ended with a pretty sinister cliffhanger, issue #17 takes the series back a ways to tell a humorous holiday story, one that shows readers both the cleverness of Matt Fraction and his ability to take risks in the comic medium. 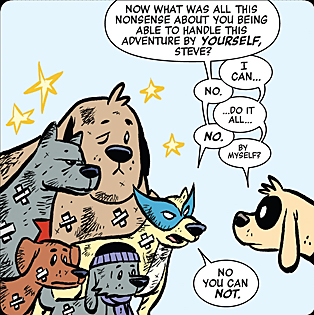 Told through a cartoon involving dogs, super-powered animals and a talking sun, Hawkeye #17 is Fraction’s way of being introspective about the series. Many of the events of the comic imitate Clint Barton’s chaotic life and his personal insistence on doing things by himself, without anyone else’s interference.

The animal narrative is great at pointing out the foibles of its lead character, particularly when readers have become so close to Lucky the dog. Fraction also gets to throw a few jabs at Marvel’s biggest rival, as the cartoon shows how the “Winter Friends” fail quickly while Steve the dog – who has no powers – can easily summon help and defeat the evil forces destroying winter.
But this issue is at its best in Chris Eliopoulous’ art. Giving the comic a cartoonish spin immediately lightens the issue, so that readers who were expecting a resolution to Clint’s predicament will not only know that it isn’t happening this month, but that what they’ve been given instead will be much more humorous and airy. For those of us who grew up watching Saturday morning cartoons, this issue will easily take you back to those days.

While I would have preferred to know the resolution of the previous issue, I can’t fault Fraction for this comic – even if it is misplaced by several months. Still, the guy provides a nice respite that is just as entertaining as any other issue of the series. 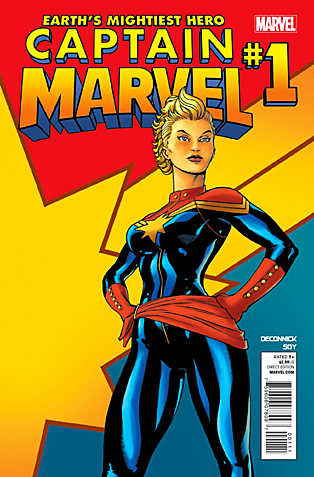 Even superheroes get restless.

Captain Marvel #1 is built around the concept that its lead character, Carol Danvers, wants to get away from her sedentary life. So she decides to go out exploring in space. Through heartfelt characterization, and a pretty clever script, Kelly Sue DeConnick delivers a solid first issue that gives new readers a starting point to jump aboard Carol’s intergalactic quest.

Much of the comic focuses on how stale Carol’s life has become. Even the action sequences show us that the character can operate without much thought, and that fighting criminals has become a banal exercise in repetition rather than a rewarding experience.

And the story is really about belonging. Carol doesn’t feel like she fits in anywhere, and she hopes with distance she’ll discover just what role she can play. The immediate connection is what struck me most about the issue. Many people have felt that sense of misplacement or alienation, so identifying with Carol isn’t difficult.

Furthermore, DeConnick uses enough humor to lessen the seriousness of her subject matter. Much like Matt Fraction, DeConnick uses clever dialogue and funny references (like Star Wars, for instance) to keep readers engaged with the more human side of Carol’s situation. Sympathizing with a superhero is hard enough, so when the reader can relate to the heroine, it makes reading the comic that much more enjoyable.

I also really like the simplicity of David Lopez’s art. Fine ink lines allow the characters to emote more, both in facial features and in physical gestures. Lopez gets a little creative in a few action sequences, particularly one where Iron Man and Captain Marvel discuss the implications of an exotic find, but all while beating up a trio of muggers. The casualness of his design makes the reader focus more on the conversation than on the action, which is what DeConnick is obviously going for.

I like Captain Marvel #1. While my knowledge of the character is pretty limited, I found this issue very welcoming and the concept immediately intriguing. I hope that Carol finds what she’s looking for, and I’m pretty sure readers will be entertained during the process. 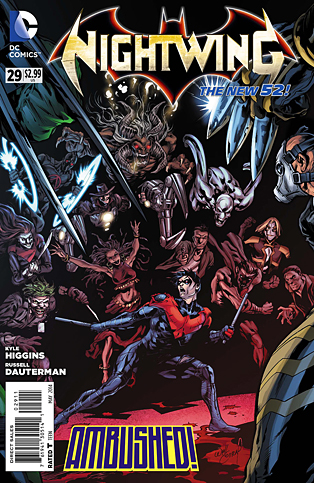 Bannen’s Book of the Week: It’s hard to read a book like Nightwing #29 and not want to burst into tears.

Kyle Higgins writes a story that defines the word “closure,” both for its main character and his friend, a poor girl suffering through the tragedy of murdered parents. Yet Nightwing #29 is more than a reminder of the moments that made Dick Grayson the man he is; it’s a retrospective of the character, and one that seems especially poignant given the incidents of Forever Evil #6.

Nightwing #29 centers around Jen, the girl who figured out Dick Grayson’s secret identity, and the one who saw her parents slain by the psychopathic Zsasz. Looking for revenge, Jen tracks Zsasz to his hideout, but with Dick’s help, she learns that there are some things greater than revenge.

Dick’s constant narrative in the comic is where the issue hits its marks. Tracing the events of Dick’s life, from his beginnings in the circus tent where his parents were murdered, up to the recent events of Scott Snyder’s “Death of the Family,” Kyle Higgins gives readers a deeper insight into Dick’s remorse and the ways in which he’s overcome his anger to reflect on the people he loved and lost.

What’s most insightful about the issue is realizing that Dick’s narrative is directed at one character. Once this moment becomes clear, the issue takes on greater relevance, and it immediately made me flip back to the beginning to read it once again. And Dick’s final speech is heartbreaking, a statement on loss and sadness, but one that’s so relatable you can’t help but be moved.

For example, he says, “Something funny will happen and you’ll want to call your mom and tell her about it. And then you remember you can’t.” It’s this kind of dialogue, the kind that rips your heart from your chest, which elevates the comic to a level of beauty and empathy. Everyone knows the feeling Dick describes – be it someone’s mother, father, sibling, cousin or grandparent – and that moment of ache when you realize that person is gone.

And Russell Dauterman makes the comic come alive. His work is similar to Stuart Immonen’s – sharp, angular designs but impressive levels of detail and sharp finishes – yet unique and beautiful in every way. It could be Pete Pantazis’ colors, but I have rarely seen a comic so gorgeously illustrated, inked and colored. Everything about the issue is just so clean and polished that one can’t help notice the level of skill of everyone involved.

I loved this issue of Nightwing. A comic that can affect you in this way is especially rare. I’m sad knowing that Kyle Higgins will no longer be writing it. After seeing such incredible work and experiencing such palpable emotion, I hope that Higgins and Dauterman will go on to greater things, because these guys clearly work well together and know how to both tell and show a story.

This is the kind of writing I wish I could do. If I never succeed, though, at least I can sleep easy knowing that people like Kyle Higgins exist. 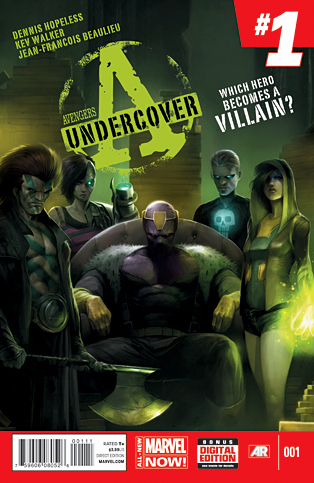 When I picked up Avengers Arena #1 last year, I was predisposed to hate on it. I am a big Battle Royale fan, but the idea of a bunch of kids trapped in an island death match can only go so far. I am so happy that Dennis Hopeless, Kev Walker and company proved me wrong. So happy in fact, that I when I heard the same team was doing the sequel series, Avengers Undercover, I was excited to see where they would take this team next.

Avengers Undercover #1 doesn’t quite feel like a first issue as much as it does an epilogue to Avengers Arena. Nico, Chase, Hazmat, Deathlocket, Cammi, Cullen Bloodstone and Anachronism have returned from Arcade’s Murder World. They are all going through PTSD. Chase, the most visible survivor, is doing interviews on every talk show that will have him. Deathlocket is letting S.H.I.E.L.D. study her cybernetic appendages. Cammi is living with her mom. Not much is revealed about where Nico is, but she’s cut herself off from her pals in the Runaways. Hazmat is wandering around. We don’t know much about Anachronism except that he went back to school and is concerned about his friend, Cullen. Oh, and what’s Cullen been up to? He’s been looking up every known address of Arcade’s and blowing up said addresses. At least, until three weeks before Avengers Undercover starts… And now Cullen is missing.

The first issue catches new readers up to speed while letting old readers check in on Arcade’s Murder World survivors. Hopeless and Walker use the issue to define these characters now that the whole world saw their struggle on YouTube. They’re all suffering from PTSD and to Hopeless and Walker’s credit, the survivors are dealing with their problems in different and intriguing ways.

While this issue does a mix of catch-up and set-up, it doesn’t quite get to the Undercover part of Avengers Undercover just yet. This issue establishes where our heroes stand and the trials they will endure when facing Baron Zemo’s new Masters of Evil. Hopeless and Walker’s character work elevated Avengers Arena beyond its Battle Royale/Hunger Games gimmick. The stakes are pretty high in this series, and I’m looking forward to seeing the team go up against villains who have actually defeated their enemies a time or two.

A Chat on Titans

Return to the Hi-Tide