For a “Rise of the Third Army” tie-in, New Guardians is a more of a character story than a tale of action. But this is what makes the comic worth the buy and a surprisingly good read. I say this not because Tony Bedard is not an adept writer – he is – but because the “Third Army” tie-ins have lacked the same spark found in previous tie-ins for “Sinestro Corps War” or “Brightest Day.” Yet where other writers have failed to keep the story interesting, Bedard succeeds due to the way he builds the story to show how far-reaching its effects actually could be for the rest of the Green Lantern universe. 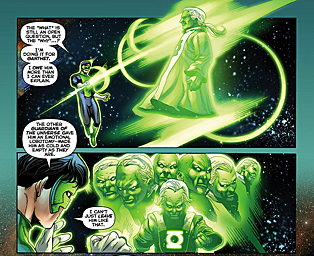 New Guardians is a series about Kyle Rayner’s quest to wield every one of the colored rings on the spectrum. In this issue, he learns how to conquer the yellow ring, and readers get to see a heroic and humanized Kyle. As the heart of the Green Lantern Corps, Kyle’s role in “Rise of the Third Army” is pivotal because it seems he has immense power – enough that the Guardians are nervous and trying to track him down.

Bedard also writes a fearless and powerful Carol Ferris. There’s a great scene of Carol confronting the queen of the Star Sapphires, but Carol looks anything but weak; she looks like a warrior – much like Wonder Woman. I personally love her new costume, as it’s more than a very revealing outfit. Instead, she looks imposing and regal.

Andrei Bressan and Amilcar Pinna are responsible for this imagery, and much of the artwork is very well done. The Guardians look insanely sinister, and when Kyle battles Arkillo, the artists draw some impressively detailed close-up shots. I wasn’t a huge fan of Kyle’s yellow suit (he looks like Judge Dredd if he were to wear a yellow ring), but the rest of the art is stellar.

I could have done without the one-dimensional Arkillo (who basically stomps around like the Hulk, referring to himself in the third person and shaking his fist a lot), but this issue feels like a necessary part of “Rise of the Third Army,” enough so that I’d urge other Green Lantern fans to read it in order to have a deeper understanding of the arc. Plus, this is proof that other Green Lantern writers can fit in nicely to the immense universe Geoff Johns has crafted during his run. 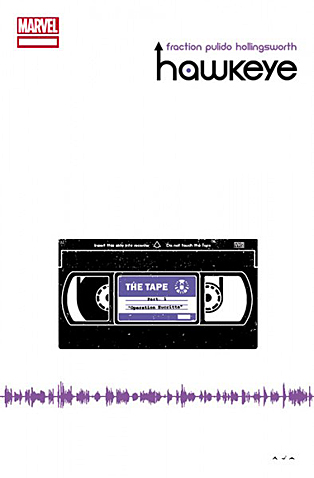 How much would you pay to destroy the life of a man who represents everything you stand against? This is the premise of writer Matt Fraction’s fourth issue of his acclaimed series, Hawkeye. Except this time, Clint Barton is removed from his element and dropped into the glitzy, illuminated (and fictional) city of Madripoor, given an American Express black card and forced to buy his way out of a jam that has the possibility to ruin a lot of lives.

Fraction is damn near perfect with his storytelling. The comic moves along at a fast clip, but not without ample doses of humor and excitement. Clint is shown to be more resourceful than we previously assumed, yet just as prone to bad luck as we’ve come to expect. For a comic this heavy on dialogue, the story never feels sluggish, as Fraction finds a way to make the conversations as engaging as the action. While I had an inkling of how the story was going to end, I still appreciated Fraction’s cleverness and the way in which he incorporated other characters from the Marvel Universe, particularly in such hilarious fashions.

My one major critique with the comic has to do with Javier Pulido’s art. David Aja’s absence is definitely noticeable and Pulido has style that makes the comic lose its visual fluidity. Aja’s Clint Barton looks heroic and cavalier. Pulido’s looks sick and tired. He’s able to keep the pacing consistent, and he uses the same point-of-view shots for effect – both in suspense and humor – but the characters lack their usual sleek look. This was hard to get around.

The comic is still great, and Fraction crafts yet another fun and interesting tale. I hope Aja returns soon, if only for consistency, but again Hawkeye is a fantastic read. I can only wonder what other trouble Clint will get into with Fraction at the helm. 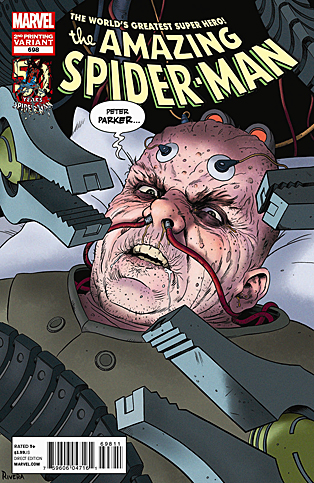 Bannen’s Book of the Week: This is the comic everyone has either been talking about, or had ruined for him. I was lucky to have seen no spoilers for this and it definitely made the finale of the issue have more punch. So, for those of you who don’t know, I’m about to ruin the end of Amazing Spider-Man #698.
This is your official spoiler warning.
Still with me? Okay. In the end of the issue, we learn that somehow, Dr. Octopus has switched bodies with Peter. His mind is now in Peter’s body, and Peter’s mind is trapped in the husk of the once great Otto Octavius.

If you think this sounds stupid, you need to read the comic.

Dan Slott builds the climax from the initial page, doing his best to make a lasting impression. The comic gets a bit fluffy and saccharine, all in an attempt to add weight to the final image, but it works. Basically, Spider-Man swings around New York thinking about how much he loves being Spider-Man. He also tries to reunite with Mary Jane, and take in his aunt’s rehabilitation, so you can see how Otto has the potential to destroy everything Spider-Man loves and represents.

Furthermore, I was struck by just how surprised I was by the ending. I didn’t know what to expect, but I also didn’t expect to react in the way I did. I felt sad for Spider-Man. Slott has really backed his hero into a peculiar position, and with how much he’s built the animosity between Peter and Otto (over the course of his entire run), I can see how Doc Ock would use this opportunity to be as cruel as possible. We’ve seen this kind of story before, but the emotional weight it carries still impressed me.

Richard Elson’s illustrations are Dan Jurgens-like in appearance, and by that I mean the art is clean and unadorned. Elson’s close-up shots fare better than some of his distance shots (particularly Doc Ock’s face), because sometimes Peter looks like a member of an ’80s rock band – gaunt, feminine and sporting very fine hair (think the lead singer of A-Ha in “Take On Me”). Nevertheless, he gets the job done.

Slott has hinted at some major changes in Spider-Man’s life, so issue #698 is just the beginning. But if each issue can offer readers interesting twists like this, I think Marvel will have no shortage of Spider-Man fans clamoring for the next read.