Do you think a poncho can keep a secret, pardner?

Switchblade Moneys’ first launch absolutely sings the dusty and desolate chorus that lodged old Spaghetti Westerns firmly in hearts and memories. Secret Ponchos oozes style. It pays beautiful homage to the films that inspired it by showing you the world, not telling. (It’s crazy how that Writing 101 lesson is still absent from so many games.) Gas lamps give a haunting glow to the dirt roads in a town populated by dead gunslingers. A wrecked train lies among twisted steel and scattered freight. It doesn’t so much feel like you’re dropped genre fiction inspired arenas as much as your pitiless, violent, characters are walking through the fog in an equally pitiless and violent world.

Care went into each of the people living in this world. The playable outlaws, bounty hunters, and occasional murderer with a bent sense of justice, vary widely. They each have a sordid tale that brought them to where they are now, and their costumes, weapons, specials, and play style reflect them as characters. In this way, Secret Ponchos feels more akin to a fighting game rather than a shooter.

This carries into the combat as well. Outlaws come packing their signature weapons which all have varying ranges. This means that as you and your adversary take dodge rolls and disappear behind cover, knowing how to smartly space yourself from them becomes just as important as actually shooting them in the face. It’s simple, but this bit of meta-game is a big part of what separates Secret Ponchos from other multiplayer shooters. Matches become more about strategy rather than twitch reactions and memorizing maps. 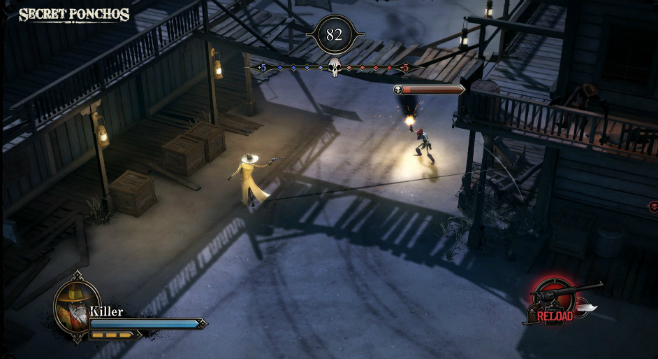 For the points in its favor, the isometric view of Secret Ponchos does it no favors. The game handles like a dual joystick shooter, with your weapons and special abilities mapped to the top row of triggers. The camera angle makes lining up shots difficult. It’s not uncommon to dump most of a precious clip at what seems to be a bad guy’s torso, only to see bullets flying everywhere but. An indicator appears on screen when you’ve properly lined up a shot, but constantly being on the lookout for an indicator isn’t nearly the same as drawing a chrome six shooter and dropping a rival on nerve alone.

Breaking into playing multiplayer shooters can be a difficult thing to do. If you already play shooters, you’re probably pretty good at them, and if you’re the new guy, you don’t have a chance to get good because you’re constantly dying. It’s a self-fulfilling prophecy that keeps people watching from afar. Secret Ponchos puts a really cool spin on the core gameplay of the genre. It legitimately makes it possible for someone with limited experience with shooters to win matches. Grab your hat and spurs, outlaw, Secret Ponchos reminds you that happiness is a warm gun.

Battlefield 1 Ain’t Much of a WWI Game
Previous Post