The internet of the early ‘90s was a slow, sluggish affair; websites took an eternity to load, dial-up internet access would be disrupted by an absent-minded sibling picking up the phone, and web pages the likes of Geocities, Angelfire and Tripod were filled with unreadable neon words on galaxy backgrounds and weepy midi music. And for some reason, these websites were also always under construction.

On hindsight, these sites may seem hilariously gaudy, but what made them unbearable then was their capacity for slowing our computers to a crawl; the flashier the pages, the longer their loading time.

The biggest culprits of this unforgivable crime were MySpace profiles, plastered with way too many spinning gifs of babbling babies, dancing bananas and quasi-inspirational quotes (“Haterz hate me because I’m sooooo fabulous!”). In addition to crushing my computer, they also crushed my faith in design aesthetics and humanity.

Thankfully those days are long gone in the wake of readily available broadband internet, but they never trail too far away from our collective memory.

Vaporwave, an art movement and music genre that emerged in 2010, was partly a result of this internet subculture. Combining the retro aesthetics of the late 1980s and early 1990s with commercial lounge music and smooth jazz, it was originally conceived as a joke, but soon took form as an anti-capitalist response to consumerism. 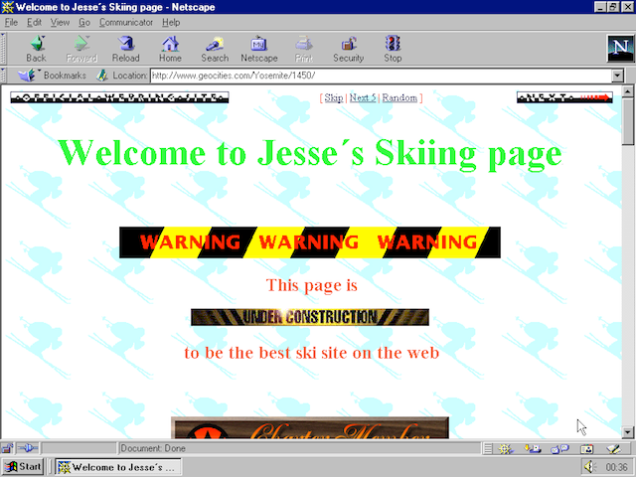 Wearing its influence proudly on its sleeve, Hypnospace Outlaw is also another product of this Internet age. A game about arresting cyberspace outlaws as an Enforcer, Hypnospace Outlaw takes place in Hypnospace, the internet of the future where people travel when they go to sleep with a nifty headband.

Much like the Geocities pages that plagued the early days of the Internet, Hypnospace is also filled with rotating skull gifs, nonsensical ramblings and awfully catchy midi music that drones. “Hypnospace! Is Great!” pop-up ads and viruses—the scrounges of early internet—are also prominently featured. They can get in the way of your policing, but add another layer of to the game.

Judging from the clips and screenshots that developer Jay Tholen shared, Hypnospace Outlaw feels like a joyride in a cleaned-up amusement park, where the kids scream a lot less, and the place doesn’t smell like projectile vomit splashed out from a passing roller coaster. Without the terrible bits that remind us of how excruciating the early internet days were, the game becomes garishly endearing and incorrigibly cheery.

This ‘90s internet aesthetic, however, is more than just a cop out for appealing to players’ retro sensibilities. Complete with silly art and inane midi loops, it is meant to mask the grim reality of excessive censorship and government surveillance—and it makes sense; as the Enforcer, you are supposed to care very little for the outlaws you apprehend.

This dichotomy was brilliantly encapsulated in Tholen’s mini game called Hypnospace Enforcer, a prequel of sorts to Hypnospace Outlaw, and if I were to venture a guess, it’s probably similar to how the latter is going to play out.

If you wish to learn more about Hypnospace Outlaw, you can hop on over to its Kickstarter page, where you’ll also be spammed with more colourful gifs and impossibly catchy music about Hypnospace.