Jim Thompson’s The Killer Inside Me #1

The last thing I was expecting to see this week was a solicitation for a comic book adaptation of the novel The Killer Inside Me. Fans of author Jim Thompson and those who’ve read The Killer Inside Me know what I’m talking about. This is a dark story, one of paranoia, violence and psychosis. For those who are going in blind, I envy you. I’m even a bit scared for you. The Killer Inside Me is out of control and over the top in the best of ways, yet not gratuitous in the way that, say, modern “torture porn” horror movies are.

I’ve long been a fan of crime fiction in the noir/pulp vein. There’s the understated brilliance of Raymond Chandler (The Big Sleep) and the balance of no-nonsense/all business with wit and verve of Dashiell Hammett (Red Harvest, The Thin Man.) Season things with a little bombastic, two-fisted 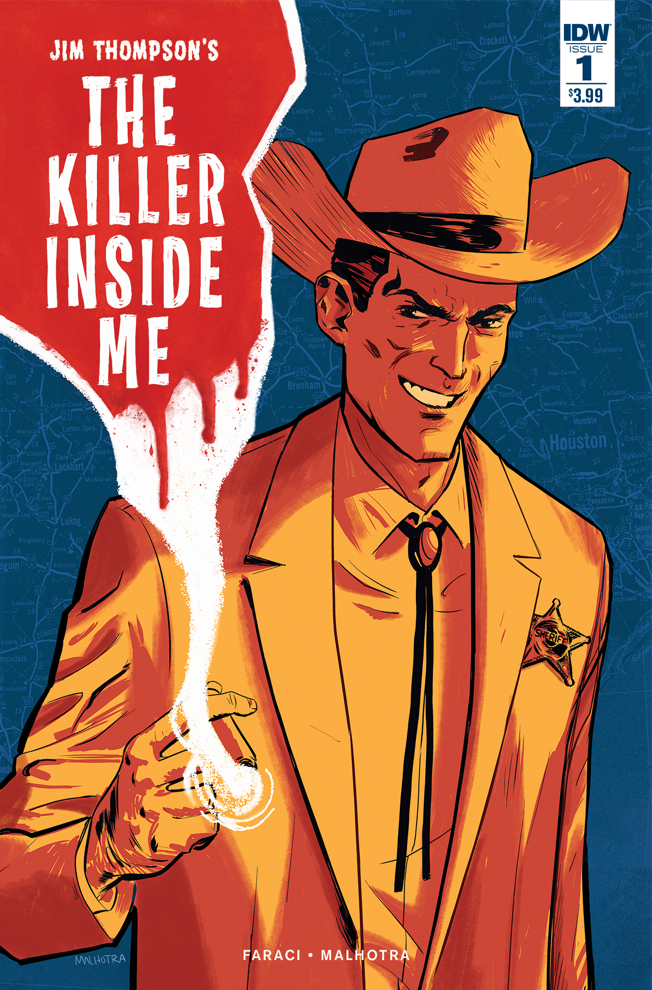 Mickey Spillane action and we’ve got ourselves a gumbo. But that’s just getting the party started. Permit me the hyperbole, but when I first encountered Jim Thompson, my mind was blown wide open. He wasn’t just a great writer for his time (such a pithy descriptor) or just a great writer for the pulps (ugh, such condescension) – he was a great storyteller with a unique world view, one from the vantage point of rock bottom.

Thompson does have his faults. I’ve paid good money for some books that are not so good. Thompson wrote a lot, and like your favorite band or musician, there’s bound to be some filler in there. But like your favorite band or musician, if you’re in all the way, you buy every record and every side project. Thompson had an intuitive understanding of the potboiler, but his specialty was the blowing of the lid off said pot. No one captured absurdity and madness like Thompson. For the uninitiated, start with The Killer Inside Me, then go down that rabbit hole withPop. 1280 or get real, real gone with A Hell of a Woman.

Sorry for the gushing, folks. Let’s get on to the matter at hand! How does one viably make The Killer Inside Me a comic book? The original novel has a lot of dialogue and is heavy on internal monologue. What is writer Devin Faraci’s real job here? He’s got the source material, the words as writ from Thompson-on-high. Let’s also consider there are two film versions; both have their faults and strengths. So let’s say Faraci is our screenwriter and director here. He has to choose the highlights, as a comic naturally reads differently than a book. He sets the stage for Vic Malhotra (art) and Jason Millet (colors) to flesh out both the mundane day-to-day life of a small-town deputy sheriff, and the fits of rage said deputy, Lou Ford, exhibits. While Ford is our protagonist, he is no hero. He’s had his traumas, but make no mistake: Ford is a terrible, terrible human being. Our creative team has a delicate balance to strike. They’re in essence showing what happens when madness goes unchecked, but need readers to come back each month. So, how far should they go?

Issue #1 starts the five-issue mini series off on strong footing. We see Ford and the innocent facade he hides behind, but by page five the beast inside the man is revealed. Millet uses shades of red to highlight Ford’s outbreaks of rage, while scenes where Ford plays mind games with townsfolk are colored with a nod to the shadow and light play of film noir. Faraci’s dialogue largely comes from the book (sure to keep purists like myself happy) and paired with Malhotra’s grasp of facial expressions and tics, builds tension in each scene.

Although I know how the story ends (spoiler alert: not good) I’m excited to addThe Killer Inside Me to my monthly reading list. I’m curious about what will and won’t make it into the comic from the novel, and how shall I say… certain scenes will play out (no spoiler this time, buy it yourself.) Join me on this roller coaster ride to Hell and back. It’s worth the price of admission.

The Witcher: Curse of Crows #1

Fair to say that around here at Unwinnable, we’re fans of The Witcher. So when I saw the new Dark Horse Witcher comic book, well, I could hardly resist.

In short, it doesn’t disappoint. Writer Paul Tobin encapsulates everything that is The Witcher in relatively short order and with a fair amount of flair and panache. It’s tightly written, and hits all of the notes that a good Witcher story should. There’s Geralt and Ciri, a monster (or three), muddy 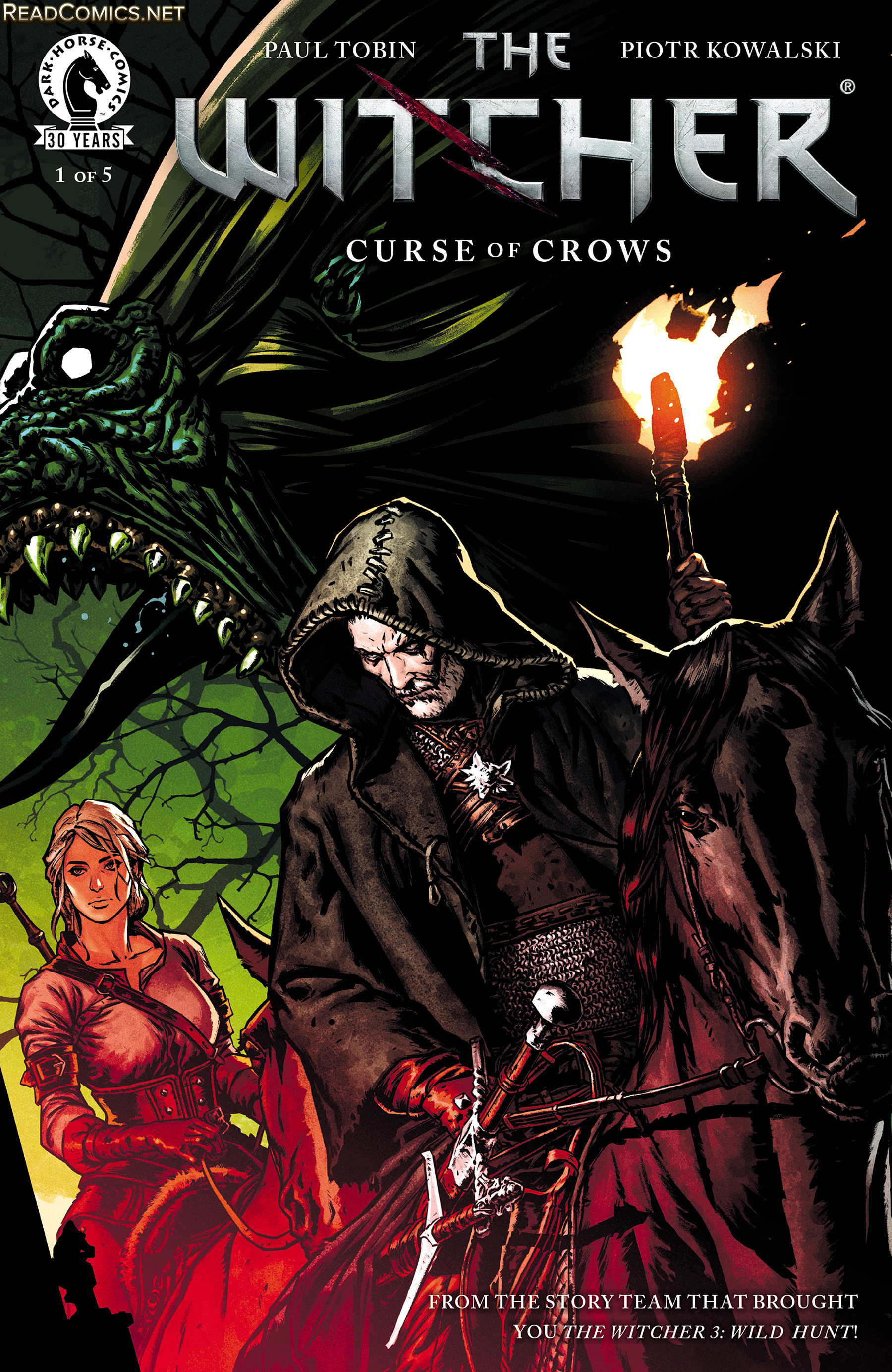 morality, and HBO levels of nudity.

At surface level, the The Witcher: Curse of Crows #1 is just a story about Geralt and Ciri hunting a striga, monster that is sort of werewolf like and known to smell truly awful. But as Geralt, Ciri, and a woman they rescue early on, travel towards Novigrad it takes on the qualities of a road journey in the flashback vein of The Canterbury Tales.

These flashbacks are told with directness and sepia tones. Anyone who has played the games will be able to read them in the voices and feel the intonation. Anyone who has read the books will be delighted to see the colorful realizations of locales and characters.

At first I wasn’t particularly taken by this style. It comes off as slow and a bit plodding until it gets its legs under it. At one point Ciri comes close to telling Geralt to get on with it.

But as I said, it captures the spirit of Geralt superbly with lines like “he’s actually not all bad once you get to know him.” That’s what separates Geralt from the other famous monster hunters, he cares. It gets him in trouble and occasionally costs him, and others, dearly.

There’s a “look and feel” to the Witcher universe and Piotr Kowalski captures it well. It’s a shame that none of the pages have the vibrancy and grit of the cover art (by Grzesiek Przybys) but the book as whole holds up well. In fact, I actually prefer the presentation of the flashback sequences to the present time panels. The usage of colors and shadows feels like a modern interpretation of 70s comics and not the clean lines of modern aesthetics.

Put all together, *Curse of Crows* is perhaps the beginning of a wonderful little addition to the Witcher-verse. Many limited runs struggle with having their own clearly defined beginnings, middles, and ends while maintaining and contributing to the overall arc of the run. If nothing else, it feels like a Witcher story and that’s enough for me.

Predator Vs. Judge Dredd Vs. Aliens #2

This is a crossover that is pure comic book lunacy, and a good time as a result. While mashing up the aliens and predators on screen have led to less than desirable results, doing the same in comics makes so much sense. Comic books are the purest form of “throwing everything at the wall and seeing what sticks”.

It’s a medium that can afford to cater to the tastes of a certain corner of fandom, and do so with little budgetary restraints.  Not only do 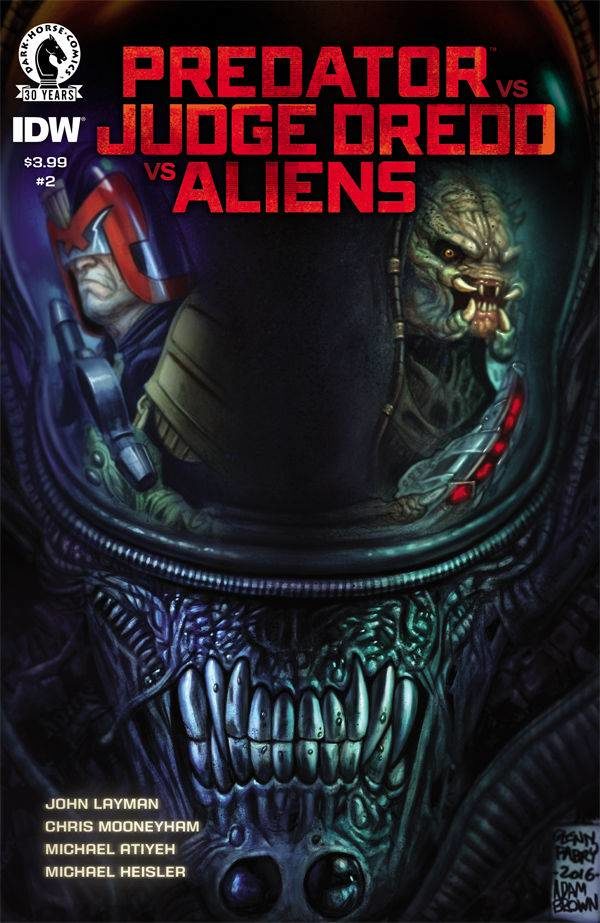 you not need a budget or very much reason to have Xenomorphs and Predators creating chaos but you can throw in Judge Dredd, some mutant animal men that look like Battle Beasts and a crew of unfortunate Judges and have yourself a party. By the second issue it’s so far, so good!

While I’ve reviewed comics featuring Aliens and Predators before I’ve never really written much about Judge Dredd. The character has existed as a bizarre fascist antihero in British comics for over 35 years now. Given that we’ve never seen Joe Dredd’s face or know little about his backstory the basic foundation of Judge Dredd and 2000 A.D. makes for a very malleable formula. This has led to some wacky, dark thrilling and entertaining storylines over the years, and some of the most consistently fun ongoing science fiction in comic books.

It makes sense that in the vast urban sprawl of Dredd’s home of Mega-City One that characters from other corners of science fiction and comics can easily sneak in and pay a visit. The Xenomorphs from the Alien films have paid visits before, as have some Predators.

To change it up so far this series has decided to stick to the area outside the Mega-City walls known as the Cursed Earth. Specifically an Irradiated swampland known as the Alabama Morass. Dredd and his team of Judges trailed and sentenced a cult leader known as Archbishop Emoji to this wretched place.

As a result they find themselves in the middle of the machinations of twisted arachnid man Dr. Reinstot. In this issue we learn that Dredd and Reinstot have crossed paths before five years earlier, and as a result of that confrontation the evil Dr. Moreau-like character Reinstot had to flee civilization to conduct his gene-splicing experiments. He’s not too happy with Dredd as a result, and has big plans to use the extraterrestrial facehuggers that he has acquired from the last time the Xenomorphs came to town.

We learn in the first issue that he managed to capture a Predator who was attracted to the massive swamp as a hunting ground. His Xenomorph breeding experiment was successful, and now there’s a Predalien running around. We also learn a team of pissed off Predators want to rescue their doomed buddy, and are cutting through Reinstot’s army of half men, half animals to get to him. It’s a lot of setup for the next issue, which promises a battle royal of beloved science fiction characters pummeling the tar out of each other.

Normally such mindlessness in comics annoys me, but in the case of this crossover it makes perfect sense. This is a Judge Dredd comic guest starring Predators and Aliens. There should be action and dark humor, which these two issues have delivered with aplomb so far. A religious zealot that happens to be a robot that speaks in texting shorthand gets blown up in the opening pages of this issue for Pete’s sake.

Fans of these three properties know what to expect, and they’re being catered to with explosions and lacerations. I expect an action-packed ride when the decks are stacked this high, and writer John Layman doesn’t disappoint. Chris Mooneyham also delivers some wild visuals like when an unfortunate Judge who is infected by a Xenomorph serum by Dr. Reinstot mutates rapidly into a hideous mess. The battle sequences are also bloody and chaotic, and Mooneyham doesn’t hold back on the details with his art.

What Makes a House a Home in Fallout?