I’ve been a fan of ElfQuest since I discovered the full-color hardcover edition of Book 1: Fire and Flight in my local library. I was maybe twelve or thirteen, and found the Pinis’ story to be as engrossing as Wendy’s art was sexy. Cutter’s got a butt that won’t quit, what can I say? All the elves do, to 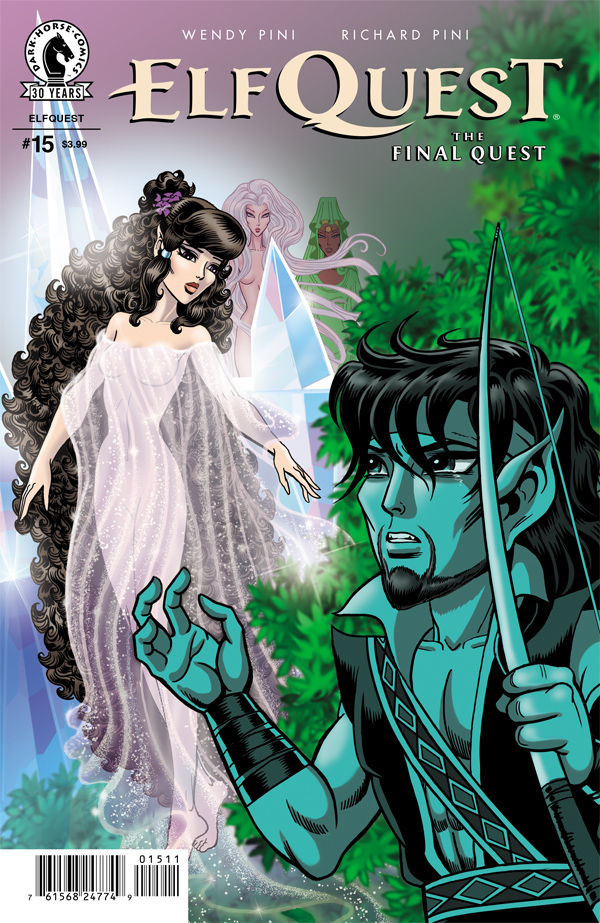 be frank, even party boy Pike. I couldn’t keep up with the several branching series over the years, but I didn’t hesitate to pick up the special prologue issue of EQ: The Final Quest at New York Comic Con in 2013 (it didn’t hurt that I got the Pinis to sign it), and I’ve been a regular reader since.

Issue #15 begins in media res, with Wolfrider chief Cutter’s “heart circle,” including lifemate Leetah and soul brother Skywise, rushing to save their dying leader and friend. He’s surrounded by the new tribe of tree-shaped elves we were introduced to in the last issue, and thanks to Redlance’s presence and open mind, we learn a little bit more about them. The mysterious stranger Dre-ahn remains as enigmatic as ever, even as it becomes clear in this issue that his near-constant singing holds a palpable calming power.

We also check in with the Wavedancers, the Palace of the High Ones, the tunnels under Blue Mountain, Ember and Teir’s respective groups of Wolfriders, and the Djunslander armada – currently heading straight for Father Tree Holt, thanks to the torture-loosened tongue of human and former elf companion Daboi, who nevertheless manages some measure of redemption in this issue.

Like most fantasy series, ElfQuest spans great distances and includes an enormous cast of characters, but I’m always impressed by the Pinis ability to help readers, even those who’ve picked up The Final Quest after a long break, hone in on who and what’s important. There are beautiful ruminations on love’s ability or inability to bridge physical and metaphysical distances threaded through the issue, which echo and enhance the larger conflict between the elves who yearn for the immortality and starry adventure the Palace offers, and those who would give it up in order to remain firmly rooted on the world of Two Moons. Literally, perhaps, when it comes to the mysterious new band of deep-woods elves. Inevitably, whether it’s upwards or inwards, onward we go – old-timers and new.

Coemeterium: an early Christian burial site similar to a mausoleum.

It’s also the place that the Mars family keeps their zombified ancient elders hooked up to a hive mind memory machine. It’s things like that that have me so hot for where Cryptocracy can go. I’m a sucker for old, scary sounding Latin, but Cryptocracy uses it in an especially menacing way.

Issue #2 does a great job of adding fear to a world which is already full of intrigue and question. There are things that even some of the highest ranking members of the Nine Families don’t know. There are secrets kept even from those who stand at the right hand of the Elder. That’s not a new 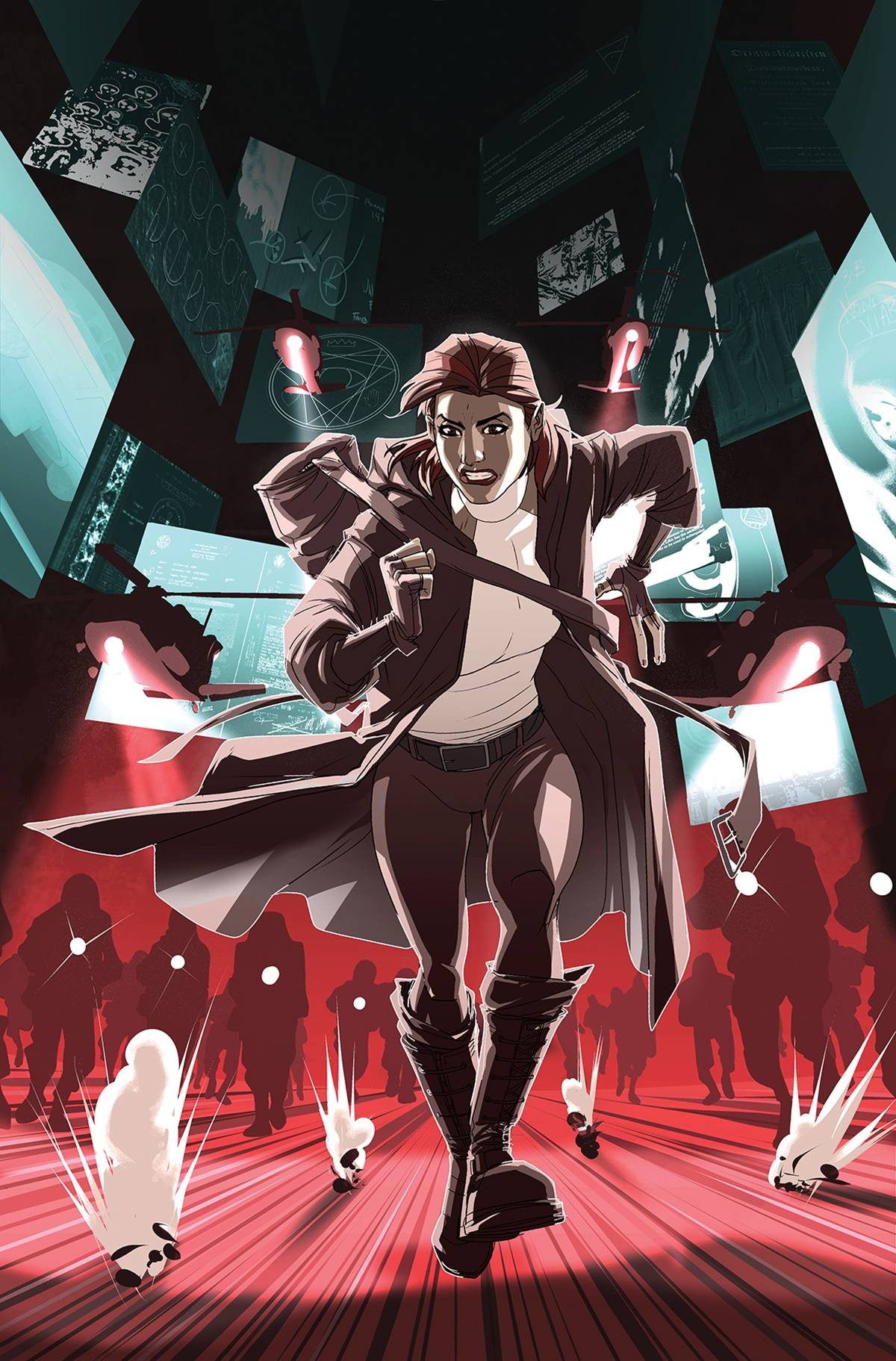 concept, but I like that it exists in Cryptocracy.

There’s something chilling about hearing a cryptid say that he thought that something very real was a legend. These are the kinds of things that keep talking bears up at night. Nightmare fuel for the nightmares. What sets this apart from the idea of the group that “bumps back” against what goes bump in the night is that main characters of Cryptocracy seem totally unprepared to bump back. When you’re supposed to know everything, what happens when it turns out your conception of the world is tiny?

That’s definitely a strength of Cryptocracy, and one that I hope the creative team realizes it has. This is a series which should always be pushing at the boundaries of the known and the understandable.

However, artistically, the second issue feels significantly flatter than the first. Pete Woods does amazing work with the characters and exterior scenes. They’re vibrant and even a little gritty. It’s the interior spaces that feel out of focus and incomplete. On a first read I hardly noticed, but once I saw some of the backgrounds I’m afraid I can’t un-see them. Unfortunately, a lot of issue #2 takes place outside.

Cryptocracy is still something I’m cautiously optimistic about. It’s got a good foundation and seems to have an intelligent, precise narrative direction that I’d like to follow, but right now, it feels unevenly cooked, like a black and blue steak. If you liked issue #1, this issue is worth picking up. If you’re still on the fence, remain there.

Predator Vs. Judge Dredd Vs. Aliens # 1 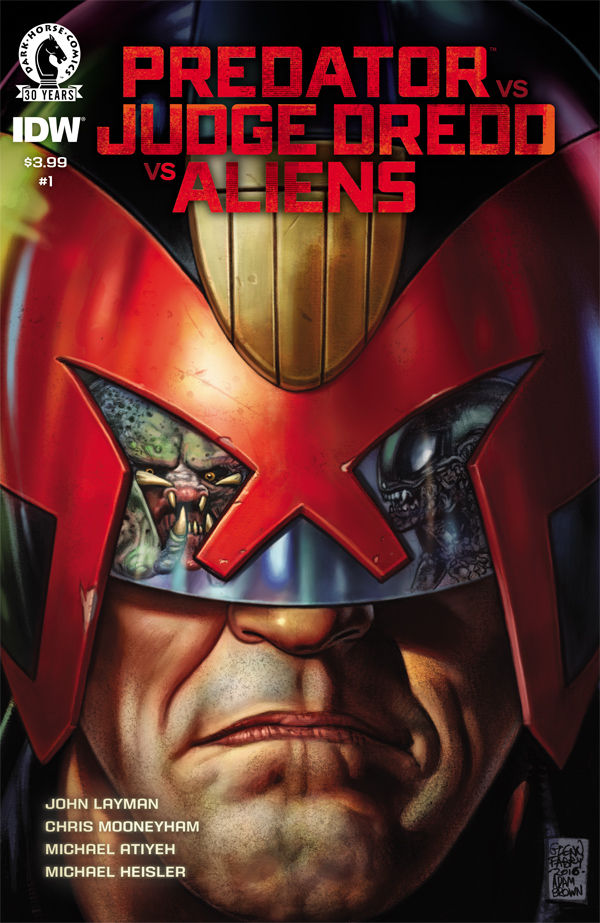 two of my personal favorites, so you can imagine how happy I was to hear about Predator Vs. Judge Dredd Vs. Aliens. Sure, there’s no Magnus in this book, but there’s a robot messiah in need of judgement, so that’s close enough for me!

Dredd has met both of these creatures in previous comics, but this series takes them out of Dredd’s home, Mega City One, and places the battle in the Atomic Wasteland known as the Cursed Earth. The Cursed Earth is a lawless land populated by all manner of mutants. When a crazed robot cult escapes Mega City One to hide in the Cursed Earth, Dredd, his old pal from Psi-division, Judge Anderson and two other Judges are in hot pursuit.

Meanwhile, a Predator has landed in the Cursed Earth, but the hunter became the prey for a group of mutant animal men, created by a post-apocalyptic Doctor Moreau named Reinstot. While ransacking the Predator’s ship, the monsters find a xenomorph skull. They bring it back to Dr.Reinstot, and he begins to clone a bunch of Alien facehuggers from the skull’s DNA.

Layman and Mooneyham use the first issue to set up a hyper-violent battle royale. Mooneyham’s storytelling flows and his action is dynamic. I loved his work on Five Ghosts Layman, he has a devious mind. I’m eager to see Mooneyham draw these monsters tearing into each other (and probably Dredd and Anderson’s two buddies).  Mooneyham’s work here is reminiscent of Carlos Ezquerra’s 2000 AD Judge Dredd comics, and Andy Kubert’s work on Batman Vs. Predator. It’s a heckuva hard thing to pull off, but Mooneyham does it perfectly. 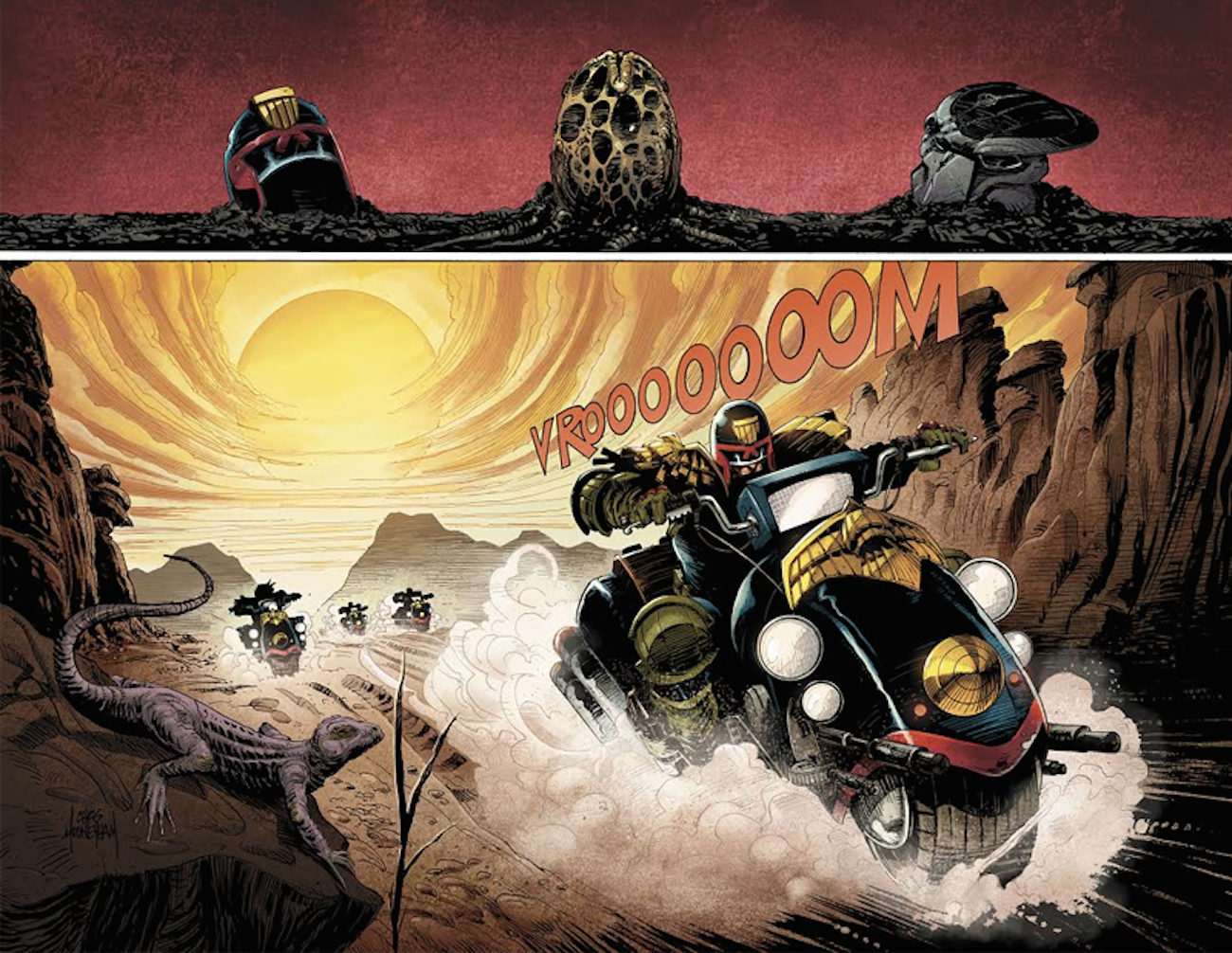 This issue sets up a yarn, so I’m surprised we didn’t see 15-20 years ago, but I am super psyched that we’re getting it now. Predator Vs. Judge Dredd Vs. Aliens # 1 is a killer comic. I can’t wait for the next issue so the Judges can get to fighting the deadliest killers movies and comics have ever seen.