The Last Born asks the question, “What if the Big Bang was not the first of its kind? And, more importantly, not the last?” Julia, the main character, wants nothing more than to leave her small-town life for a grand adventure, and she gets what she wants in the first issue. The only downside? She fell through a rupture in spacetime that led right to the end of all things. 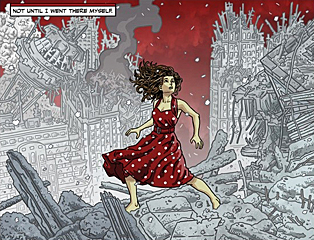 If The Last Born sounds like it’s cut from the same cosmic cloth as books like Planetary or Final Crisis, it’s because writer Patrick Meaney is no stranger to high-concept comic books. He directed the documentaries Grant Morrison: Talking with Gods, Warren Ellis: Captured Ghosts and The Image Revolution. All fine films, and his pedigree as a comic reader has a great influence on his writing.

The Last Born is a big concept, but the story’s center is about ordinary people called to do an extraordinary thing. Meaney grounds this story in Julia’s tale. She lives in a post-Eisenhower, pre-Cuban-Missile-Crisis America. Her aunt wants her to marry Tom (a nice enough fellow) but she yearns for more. There is a moment in the story where Julia stumbles into the post-apocalypse, and it’s there where Eric Zawadzki shines. He draws the hell out of this comic!

I really dug this first issue and I’m looking forward to seeing where Meaney and Zawadzki take Julia and the last remnants of life in the universe.

Whether he’s drawing homespun 1961 Americana, a crumbled wasteland or an intricate sci-fi lab that may or may not be designed to restart the universe, Zawadzki’s storytelling flows. 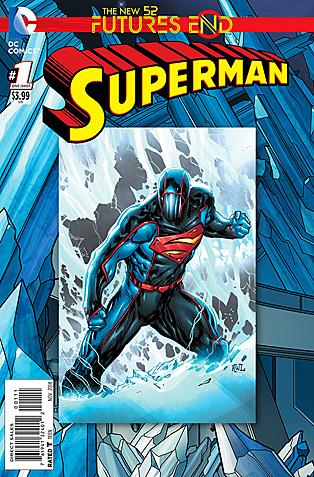 Dan Jurgens is a name synonymous with Superman. The author has penned what is arguably Superman’s best-known arc, “The Death of Superman,” so he seems fitting to be the person to tell the story of the man behind the mask, the man who replaced Superman for reasons for which we’re still not completely sure. Jurgens focuses on what makes the character so iconic, and in doing so tries to tell a coming-of-age story for Billy Batson, the boy who replaced Earth’s greatest protector. But this only makes Future’s End: Superman a trite coming-of-age story with little depth and a lot of cliché.

Jurgens starts the issue strong with Lois Lane tracking down Billy Batson. After outing the true face behind the Superman costume, Lois has a lot to justify – not only to Billy but to us as readers. Much of today’s news is focused on sensationalism over journalistic prowess, and this concept is one Jurgens explores, albeit thinly. Lois’ attempts at justification fall flat, as the logic of a bratty teenager is enough to disarm her attempts at reconciliation.

Furthermore, Billy’s reason for taking Clark’s place is weak. Clark does what he does best – he saves Billy’s life. Yet Billy only takes up Clark’s costume because “the league felt that symbol, that all-powerful ‘S’ was too powerful to lose.” So the idea isn’t even Billy’s, making his hackneyed attempt at filling Clark’s shoes all the more flimsy. You want to believe that Billy was donning the costume for the sake of the symbol, but here he proves he was just following orders.

The climax of the comic contradicts the need for Billy to have put on the costume in the first place, so this only raises the question as to why Jurgens even bothered. This isn’t a defining moment for the character, and the resolution drops the need for a Superman at all.

Len Weeks even seems at a loss with his illustrations. The inconsistency in the art bleeds through after the opening action sequence. Week knows how to depict action, so his opening pages are polished and bright, meant to make the character look impressively heroic. But the style dips after that. Facial constructions are oddly drawn and characters suffer from an overabundance of facial lines, ones that make the characters look tired and wrinkled. The final sequence – a battle with a villain named Ibac – is a bit better in the composition, but these pages fail to salvage the comic.

I like the idea of Shazam taking the Superman mantle, and I thought the character taking Clark’s place was clever. This, however, unravels weeks’ worth of plots to tell a tired story about finding yourself and being proud of who you are. Plus, I’m not sure we’re going to be seeing more of the masked Superman, and that’s the real bummer of this turn of events. I really liked the masked Superman, and I thought DC had a neat idea on its hands. The need to reveal the truth, however, defeated the need to solidify why DC should always have a Superman, not only because of what he can do, but because of what he stands for. 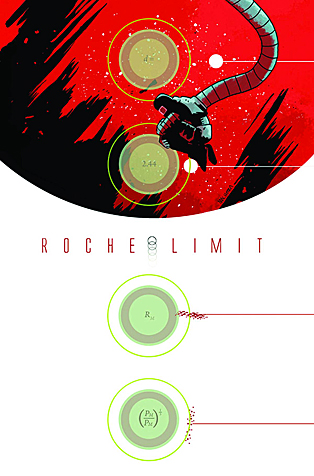 On first glance, Roche Limit is a story about another utopia gone wrong. We’ve seen it before numerous times, and the comic even comes dangerously close to being an interstellar Bioshock. But Michael Moreci takes this concept and simplifies it, using the set piece of a once luxurious destination for billionaires and making it the Mos Eisley of our galaxy. And as readers dip into the dirty, claustrophobic streets of Roche Limit, they’ll hear the wise words of old Ben Kenobi: “We must be cautious.”

Roche Limit is less Total Recall and more Blade Runner. The world is reminiscent of the one Ridley Scott created, a world of gangsters, drugs and prostitution, all lit with a backing of neon lights. So while Moreci pens a tight, gripping tale about a kidnapping, artist Vic Malhotra captures the grimy, soiled world of Roche Limit. The imagery in the comic is done well enough that Moreci doesn’t have to work too hard to sell his concept. Malhotra captures the science fiction penchant for a world similar to our own, but dissimilar enough to feel alien. Colorist Jordan Boyd also deserves a nod here, as he contributes to Moreci’s illustrations by taking the harsh world in Roche Limit and bringing it to life with a shade of sinister, uneasy colors.

Because Moreci’s story is a simple one – a cop makes her way to Roche Limit to track down her sister. Along the way, she makes friends with a drug dealer who also happens to be extremely resourceful, and concurrent to her story is one about a harsh-looking woman named Gracie who also happens to be looking for the same girl. How these two are intertwined, given the diversity of their characters, has yet to be seen, but the first layer of the mystery is peeled back by the end of the issue. While it raises more questions than it answers, I like the depth that Moreci’s building. The story has many different directions it can take, and I’m excited to follow the author down the rabbit hole.

Roche Limit is a must buy. Building off the success of other science fiction stories of the past few years, Roche Limit announces itself with a brash, bold and wholly unique entry. Regardless of its slight similarities to other properties, Roche Limit has enough individuality to separate itself from the pack immediately.

If there’s one new book you’re interested in following, my recommendation is this one. 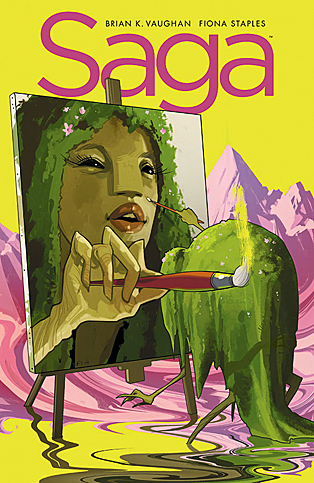 “A lot of people who came into my family’s life looking like heroes ended up acting more like villains. I wish the opposite was also true, but that was pretty fucking rare.”

So says our narrator in the opening pages of Saga #23, which, judging from the language, is definitely a more adult Hazel. This is in regards to a domestic dilemma Marko finds himself in after the blowout between him and Alana at the end of issue 22. Due to being behind on Saga, I read both of these issues back to back this past week, and I’m glad I’m did. While #22 is more of a “setting things into motion” issue, this one kicks things into full gear.

Brian K. Vaughan finds a way to physically tie almost every plot together by the end of the issue, and where our heroes (and villains, and both) end up is in a place where I can’t wait to see what happens next. Not only is the action tense and nail-biting, but the characterization as always is top notch. I’m curious to see where Vaughan is going to go with Dengo, the deranged black and white TV-headed member of the underclass of the Robot royalty. Considering how much I’d like to see Dengo’s mass murderer head smashed in, I’m sure Vaughan is going to find some way to take him in a different direction to change our perspective. Or more likely he’s just going to be a chaos factor in this epic.

One thing that I’m always amazed by in this series is Vaughan’s ability to bring characters out of the background and let us know something completely new about them. This happens with Izabel, the ghostly babysitter torso in this issue – a character who I feel hasn’t had too much panel time as of late. She has a very human exchange with Alana about relationships, who is so selfishly consumed with her domestic problems that she says some insulting things to Izabel about war. Izabel reminds her that she sometimes forgets that she’s talking to the spectral remains of a teenage girl who was cut down by the intergalactic war that rages on, killing millions of innocents in the crossfire (as wars have a habit of doing).

Staple’s art is fantastic as always, and with Prince Robot IV and Dengo playing a huge role, there are numerous occasions where she gets to throw in the details of their thoughts on their respective monitor screens – something that I never get tired of, whether it’s a serene landscape, a hungry cat or just random text and pornography. While Vaughan often brings multiple layers of story detail to each panel with his dialogue and narration, Staples also manages to do it with visual details like this, character expressions and even her lettering.

Not only that, but there is even more amazing cohesion of alien and familiar throughout this issue. Things like Yuma, a somewhat new character and dealer of bizarre alien drugs, and little details like the band tour shirt that bat lady Ginny wears with nothing else when Marko stops by at the beginning of the issue. The ability to merge the completely alien with the completely familiar is one of the most fun and defining traits of Saga.

It’s reasons like these why Saga is my favorite comic on the stands right now. Although a part of me selfishly wants to see it translated into other media, Vaughan seems dead set on keeping it as a comic book, a move I ultimately respect. Despite the fact that this comic can be cinematically epic, it can also work utilizing the tropes of TV drama, as the last few issues have shown. It’s ultimately a wholeheartedly unique comic book, though, one that lovingly embraces the details and tricks that are exclusive to comics in almost every issue. It also features crazy characters and settings that would be very hard to translate in almost anything but animation.

For almost 25 issues I still can’t wait to see where the wooden rocket ship will take us next.