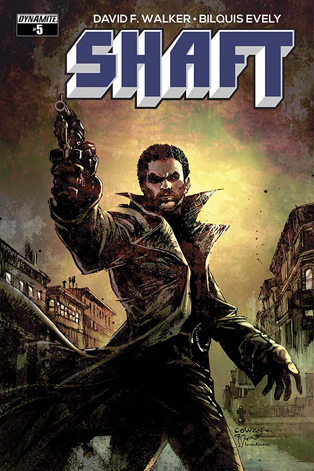 I’m late jumping into Shaft, and it’s a shame.  This is crime comics done right.

John Shaft of the comic book world is much more developed than in the John Shaft of the film series.  Yeah, the movies are great fun (and I’ll argue with anyone about how Shaft in Africa is better than Shaft’s Big Score) but we never get to know what makes movie John Shaft tick.  Sure, he fucks, talks shit, and takes care of business (sometimes in that order, sometimes in one night) but is there more to the man?

John Shaft is an amalgamation of Sam Spade, Philip Marlowe and Nick Charles, updated for modern times (modern times being the 1960s and 1970s.)  But David F. Walker’s Shaft shows more of a whole man.  We get to see the tough streets that made him, how the Vietnam War scarred him, and how love may have scarred him deeper.  Fleshing out Walker’s storytelling is artist Bilquis Evely.  Her art pulls you into the page, where you can hear the sounds and smell the smells of New York City.  Evely has a real feel for the era, and not just in fashion.  Her drawing style makes me feel like I’m looking at a comic book from the late ‘60s.

The heaviness of the writing keeps the comic grounded, sometimes surprisingly so.  There aren’t many wink-nudges to the film series (though issue #5 gives a ten-years-ahead-of-it’s-time nod to the song “The Message.”)  Curses flow freely and the racial tension is palpable, because that’s the way real people talk.  And rumination might just be John Shaft’s middle name.

Shaft (the movie) is many things.  It’s one of the heralds of the Blaxsploitation genre.  It’s urban noir.  It doesn’t shy away from ethnic stereotypes.  It’s action/sex/adventure, but John Shaft is so much more than the id run wild.  He’s a proud and dedicated man, proud of his heritage and dedicated to doing what he feels is right.

Shaft (the comic book) is a series that needs to be read as a whole, and it looks like things are heating up for the conclusion in upcoming issue #6.  There’s plenty of room left in this prequel world of Shaft for other mini-series.  So bring ‘em on.

John Shaft may be a complicated man, according his theme song, but he’s best summed up by his own inner monologue in this issue: “Did you hear the one about John Shaft?  He was minding his own business, and got caught up in some bullshit.”  And then the man took care of business as only the man can.

Full Disclosure: Unwinnable was supplied with a review PDF of this comic. 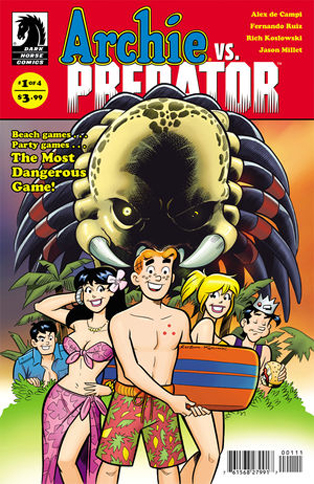 So I’ve never read an Archie comic before (or a Predator comic either) but this mash-up looked too good to miss.  The first thing that surprised me was the amount of dick jokes.  Then there are the scantily clad women.  Next, the extremely fragile egos.  Toss a pinch of class warfare on top of that.

Well, these aren’t so surprising, seeing as we’re dealing with high school kids.  Can someone clarify for me (re: my above comment about never having read an Archie comic) – is Jughead a stoner, what with the dumbness and constant craving of food?

The biggest disappointment for me reading Archie vs. Predator is that we have to wait 18 pages before seeing some real blood.  There’s a punch in the face that causes a nosebleed, but that’s not enough.  I’ve seen the Predator movies and I know the beast does enjoy stalking its victims, but the disemboweling of the Riverdale crew is why we’re here, right?  Well, Dear Reader, continue on and maybe our wishes will be granted yet!

Ah, hell, why should I complain?  This was a blast to read.  And way better thanAliens vs. Predator 2!  I’ve been unaware of Alex de Campi’s work up until now, but that will change.  My head is often stuck up my you-know-what, but after readingArchie vs. Predator and doing some quick research into her other work, I want in to her sick, wonderful world.

I’m curious to see what the Predator has in store for the remaining three issues of this mini-series.  I hope it’s gory and painful.  And I hope the beast doesn’t go into a diabetic coma when it comes to Jughead’s junk food end.

Full Disclosure: Unwinnable was supplied with a review PDF of this comic. 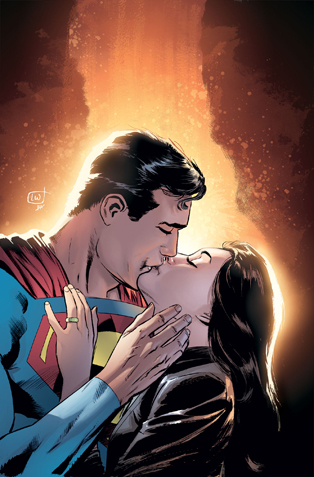 In Mad Men’s first season finale, “The Wheel,” Don Draper refers to nostalgia as, “delicate, but potent. Teddy told me that in Greek, ‘nostalgia’ literally means ‘the pain from an old wound.’ It’s a twinge in your heart far more powerful than memory alone.” The entire Convergence event hinges on just that notion. It plucks characters and situations from all over DC’s rich 75 plus year history and mashes them together in an interdimensional battle royale. Take Convergence: Superman, in which the classic Post-Crisis Superman has to go up against the grizzled and unhinged superheroes of Flashpoint!

Convergence: Superman # 1 is bittersweet nostalgia. Written by Dan Jurgens and drawn by Lee Weeks, this comic takes place in a Pre-Flashpoint Gotham City. Here, Clark, Lois and Jimmy were visiting Gotham for a reporter’s convention before their world was destroyed. Superman has spent most of his time in Braniac’s bottles city without his super powers. Of course, being powerless has never stopped this version of Superman before (Remember Reign of the Supermen and Superman: The Wedding album, folks?).

This is the Superman I grew up with. He, Lois and Jimmy Olsen are branded as being pre-Flashpoint, but Jurgens and Weeks are telling a story about the Post-Crisis Superman cast from the late 80s/early 90s. Lois and Clark are married and expecting their first child. Jimmy is fast on his feet and a dedicated reporter. These are basically the same Superman characters we’ve known from 1986-2011. This “my” Superman, “my” Lois Lane and “my” Jimmy Olsen. Jurgens’ script hits all the right character beats here. It’s like visiting with old friends.

In the larger story context, the evil Telos (Braniac’s assistant?) has decided to pit bottled city against bottled city. So Pre-Flashpoint Gotham meets Flashpoint Gotham. The heroes in Flashpoint are much more grim. They’re incredibly reactionary and ready to expect the worst. So it’s a good thing Superman gets his powers back right before Captain Thunder (Flashpoint’s SHAZAM/Captain Marvel)  goes to punch his lights out.

Lee Weeks’ art in this comic is fantastic! His Superman is fast, lean, powerful and compassionate. His Flashpoint heroes are downright scary (especially gaunt Kal-El). The battle between Superman and the Flashpoint heroes is exciting! It’s a bummer we’re only getting this Superman for two issues.

Objectively reviewing some of these Convergence books is going to be difficult simply because they’re targeted at the reader’s nostalgia. It’s a stopgap series that allows the DC offices to move from coast to coast so they don’t want to break all the toys. However, if a more of these books are like Convergence: Superman (and The Question – which I adored, but more on that next month), I’m in.

Matt Murdock Finally Gets His