Toil & Trouble # 1 got my nerdy Shakespeare gears going. Mairghread Scott, Kelly Matthews and Nichole Matthews deliver a clever twist on the Tragedy of Macbeth that’s snagged me in for the series! My first run-in with Macbeth was in high school. The play pulled me in immediately with its illicit occult trappings, cold-hearted betrayal and ruthless murder. As a teenager who was into horror movies and comic books, I enjoyed Macbeth way more than the angsty Hamlet.

Toil & Trouble is told from the perspective of the three witches.Here, they are named Smertae, Riata and Cait. Smertae has just returned from exile aboard an invading Norse ship that just happened to meet with the traitorous Scottish Thane, MacDonwald. Smertae meets with her sisters and tells them of MacDonwald’s treachery. The witches then go about their plans for crowning the next King of Scotland. The first issue deviates from the play by showing us the night before the battle and the battle itself. The entire first issue makes full use of comics’ “unlimited budget” by showing the reader the battle and even how the witches cursed their foes throughout the battle.

The Celtic inspired world the Matthews sisters draw is superb. Their work transports us right into Macbeth’s world. Their style and storytelling juxtapose the violence of the battle with the beauty of the world around these characters. It’s some wonderful cartooning. The art and script flow together well with the exception of some tone. However, given how well produced the rest of the book is, I get the feeling those inconsistencies are intentional and something that will be addressed, especially given the issue’s cliffhanger.

Toil & Trouble # 1 is a complex and intriguing take on one the Bard’s renowned tragedy. It has the potential to stand with other great Macbeth adaptations like Kurosawa’s Throne of Blood or Punchdrunk’s Sleep No More. 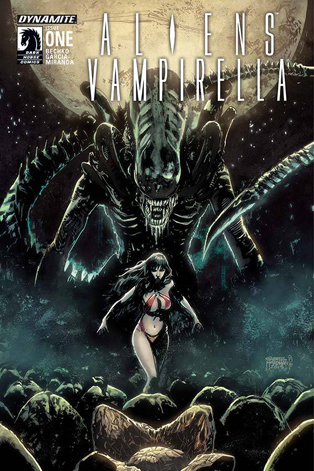 This is an odd one to review. While I’m quite familiar with the Xenomorphs of the Alien franchise across numerous iterations (I even wrote some fanfic about them for one of the Unwinnable theme weeks a while back), I know little to nothing about Vampirella. I’ve seen numerous sexy pinups of her drawn by the master artists of comic books and fantasy art in general, and I know that outer space factors into her origin. What her deal is beyond that is kind of a mystery to me. Aliens/Vampirella #1 does not help much in expanding my Vampirella knowledge, but then again it seems to want to focus on setting up a story about alien-vampires and alien-Aliens, and does an ok job of it. Still, one should not be yawning over how “been there, done that” a vampire vs. aliens story is, yet here I am.

The main problem is how dull the characters all are in this issue. Vampirella has been brought in as a vampire expert because a team of scientists on Mars have discovered some vampire tombs beneath the surface. Unbeknownst to most of the scientists there’s also some other creatures down there. By the end of the issue it seems like maybe all but two of the characters are goners. And as well they should be, these folks are pretty moronic. Even Vampirella seems stoned or something, barely doing much of anything in this issue besides becoming a face hugger victim.

There’s not much humor attempted in this issue, which is a shame because there should be in a comic book about aliens and vampires. Some of the visuals from Javier Garcia-Miranda are clever, like Vampirella awakening from her suspended animation like a vampire rising from her tomb, and an unfortunate vampire trying to suck the acid blood of an alien in the beginning of the issue, and the effects that would have on its face. Garcia-Miranda draws a nice Xenomorph too, and hopefully he will get more opportunities in this miniseries to do more interesting things artistically. With aliens and vampires there should be some rich atmosphere at play here, and so far I’m seeing some hints of it, like the cover for instance.

I’m assuming there may be some tonal shift in this series from this by-the-books Alien story, and as a big fan of the Alien franchise I really hope there is. Honestly I’ve never been the biggest fan of when Aliens crosses over with superhero books, because the two are apples and oranges really. If the superhero book happens to lean heavily into science fiction or horror then there’s a way to make it work, but typically it falls flat. Judge Dredd vs. Aliens was fun, but that’s because Judge Dredd is more of a dystopian science fiction title than anything else. To me Vampirella is a superhero with horror elements, more a byproduct of 50’s and 60’s drive-in culture than anything else. Alien is essentially a modern update of the haunted house story, and these two properties crossing over could work, but it would take a big departure from what’s been done before, kind of like what the Archie vs. Predator series did.

It seems that going through the “discovery of the Xenomorphs” drill in the oft-repeated style of almost every story in the Alien franchise took precedence over character establishment or even cheesecake, in a comic book featuring Vampirella! The end result is bland, with a somewhat interesting cliffhanger. I’ll see if things improve with issue two, but so far I’m just getting the impression that they’re just mashing up franchises for the sake up mashing up franchises. Time for me to expand on that Alien vs. Metroid fanfic!