Basically occurring in an alternate world, “Gothopia” is a sugary sweet, near perfect world for the many characters of the Bat family – but something’s wrong. Flashes of the real world keep breaking through, and this raises the question of who’s behind the farce, and what does he/she want? 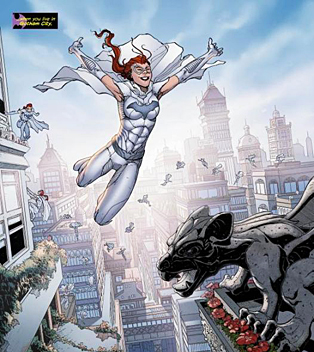 Batgirl #27 obviously focuses on Barbara Gordon’s role in the story, and Gail Simone does a great job of making Barbara’s world a little too perfect for believability. The comic opens with an ice cream CEO named Angela Ramirez and follows her as she heads to the Joker Brand Ice Cream factory. Here the story takes on a darker tone, but one that doesn’t make sense until the reveal on the second-to-last page.

And this duality is where Simone does her best work. She’s great at building the suspense by dropping hints that everything is not as it seems, and all of these little red flags start to paint a picture of a darker secret at work. Angela’s chilling actions are only made more disturbing by her putting on a plastic Joker mask. I’m curious to see what the other characters in the Bat family will experience during the “Gothopia” arc.

Robert Gill and Blond do a fantastic job offsetting the images in the comic with the true nature of the story. Gill and Blond go for bright, lively colors – candy pinks, vibrant whites, vivid purples -, but these become sickly sweet when Simone pulls back the curtain for a quick, disturbing glimpse at the truth.

As an introduction to this arc, Batgirl #27 is great at introducing the concept. I like the new character designs. And the saccharine nature of Barbara’s alternate universe is a disturbing reminder that the Bat titles are set in a very dark, very violent world. The reprieve is short lived, obviously, but intriguing enough to have me on board. 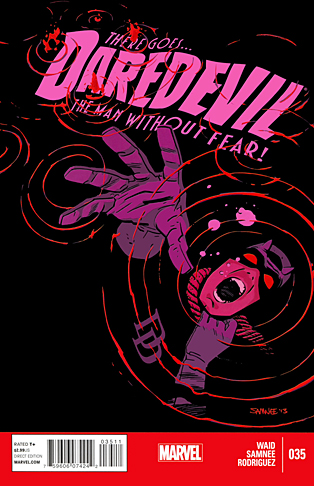 Mark Waid’s bringing his seminal Daredevil run to a close with next month’s issue #36. So while I expected some plot twist, I didn’t expect Waid to close the issue the way he did. It’s a frustrating, brilliant and exciting climax that smartly paves the way for the end of one series and the beginning of another.

One of Waid’s long-running conflicts has been Matt Murdock trying to keep his identity as Daredevil a secret. This is the main focus of the issue – either Matt can compromise who he is or reveal himself and risk everything he’s earned. The choice is obviously difficult, especially because Foggy’s life is directly involved in Matt’s troubles with the Sons of the Serpent.

So he turns to Elektra for help. I don’t know much about the character, but I know that she holds a special place in Daredevil mythos. She provides Matt with the missing insight he needs to carry on with the final stage of his journey, and her role in the climax is not missed. Much of the comic is self-exploration for Matt. He’s faced with a dilemma that has no good answer, and the interaction with Elektra paves the way for his final realization.

Chris Samnee’s art is, as usual, damn near perfect. Samnee captures the tone perfectly, relying on shadows for effect. Javier Rodriguez colors the issue. He does a fantastic job of expressing the seriousness of the conflict, particularly in the beginning of the issue as Matt stands by his best friend’s bedside, deciding if he’s going to risk Foggy’s health or lie to aid a group he despises.

Knowing that the series is going to restart in April somewhat lessens the impact of the ending, but there’s still so much left unanswered. What will happen to Foggy? Will Matt lose his license to practice law? What about Kirsten McDuffie’s role in Matt’s future? Waid has a lot of ends to tie up next issue, but he will do so by wrapping up one of the greatest runs in comics history. 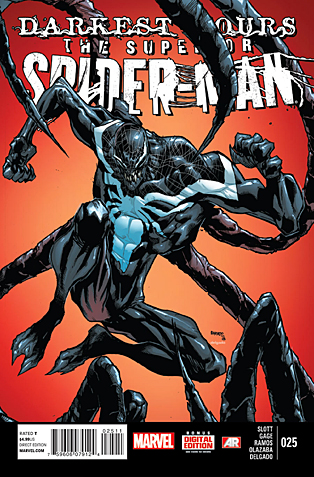 Bannen’s Book of the Week: Otto’s days as Spider-Man are officially numbered.

Marvel’s newest solicitations revealed that Peter Parker – the real Peter Parker – will be returning to the world of the living in Amazing Spider-Man #1, due out in April. This issue of The Superior Spider-Man brings us closer to that moment, as we find out just where Peter Parker has been and why he hasn’t stopped Otto from destroying his credibility as the world’s favorite everyman.

First, though, the real star of the comic is Humberto Ramos. His art is stellar in this issue as he depicts an action-heavy story with polished and detailed imagery. The finishes give every image a smoothness of texture, which also aids the chaotic battles by providing superb clarity. Sure, the panels are filled to brim with imagery, but I loved every page.

The story is mostly a throwdown between Spider-Man and the Avengers as Otto loses control of the symbiote, trashing around Manhattan while destroying one city block after another. The subplot, which builds to the upcoming “Goblin Nation” arc, is where Slott’s writing is best. He’s crafted a solid conflict between all the Goblins at play, amping up the tension around their disputes. The end looks violent for the Goblins in New York.

What’s more disturbing is the damage Otto is doing to Peter’s reputation. The people of New York look are losing their patience with Otto’s constant surveillance. The final page of the comic shows us that Otto has made some powerful enemies who no longer trust that he is who he says he is.

When Peter returns, he looks to have a lot of cleaning up to do. But at least it’ll be Peter Parker. I’ve enjoyed Otto’s tenure, but he can’t hold a candle to the original Spider-Man.