This behemoth of a hardcover anthology collects Creepy Comics issues #112-#116 within its 240 pages. Featuring work from Archie Goodwin, Bruce Jones, Larry Hama, John Severin, Alex Toth, Al Williamson, Walter Simonson, and many, many others, the stories and art are a predictable mix of hits and misses, though thankfully there are far more hits than not.

Like many other reissues of classic literature – the collected issues span from October 1979 to March 1980, so modern classics they be, in my book – a 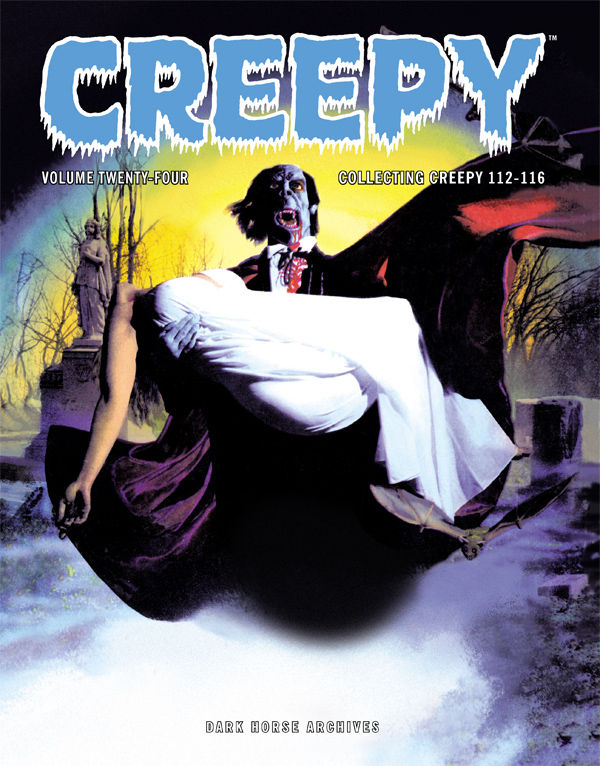 major draw comes from the context and clarity provided by a contemporary writer’s supporting notes. Writer and filmmaker Ann Nocenti ruminates on what makes fear fun and even necessary in her opening essay, and pinpoints the reprinted letters to Uncle Creepy as gems in their own right.

Indeed, reading through each letter writer’s review of the previous issue’s highs and lows (not unlike our own Last Week’s Comics column) is a veritable primer on fandom itself. The Creepy Comics readers’ opinions were so varied that they disagreed vehemently across each letter column, and sometimes shocked even me: “I don’t imagine Dracula looking like David Bowie, though,” (uh, you DON’T?!).

In addition to the reader-letters-as-time-capsule, Joe Brancatelli’s “The Comic Books” column takes on the politics of the day, both in the comic world and beyond, with eerie parallels to our own modern struggles. One of them even seems to predict the rise of the 1%.

My absolute, hands-down favorite parts of this anthology, however – aside from the cover of Creepy #113, which I find scary due to how much it calls to mind Cecil the lion – are the glorious, wonderful old advertisements. Ignoring inflation in favor of misplaced and unearned nostalgia, “genuine soil from Dracula’s castle” for a mere $17.95 plus shipping? An LP of An Evening with Boris Karloff and His Friends for $3.98? 2.5 x 3.5 ft. posters of Raquel Welch, Leonard Nimoy, and Bela Lugosi for one dollar each?

Oh, to have this collection printed on old comic book paper, for these sublime bits of marketing to have that very particular feel and smell! What the heck even is that smell? That, like Cthulhu, may be beyond my brain’s capacity for understanding, but John Ojeda from West New York, NJ had it right back in one of the 1979 letters columns: “make sure you go back to the old paper.”

As for the meat of the thing? A story of the search for love across parallel universes is as comfortable and familiar as a perfectly worn blanket in Archie Goodwin and Al Williamson’s “The Homecoming.” The final panel hinting at a child’s internal scarring from a horrifying encounter with a parent is as disturbing as it is believable in Bob Toomey and Leo Duranona’s “Nobody’s Kid.”

The profundity of a space-suited Jewish man embracing and declaring his love for Hitler hits with surprising force in Gerry Boudreau and Duranona’s “Heat.” Mike Saenz’s artwork in “Cyrano” looks like something out of Giger’s earliest concepts for Alien. These and many other worthy writers and artists serve up stories of space, barbarian warriors, the Foreign Legion, sorcery, zombies, androids, and creepiest of all, the banal horrors of the everyday.

The superhero world of comic books is full to bursting. Multiple books on one character quickly leads to over-saturation and diminishing returns. How much money a month is the average Batman-obsessed fan expected to spend on their favorite hero? DC is playing games with cover prices in the “Rebirth” era, lowering the major titles from $3.99 to $2.99, but a twice-monthly release schedule for many of these titles can have readers paying more out of pocket.

With that said, All-Star Batman has me excited about new adventures for the Caped Crusader like I haven’t been in months. Scott Snyder is back at 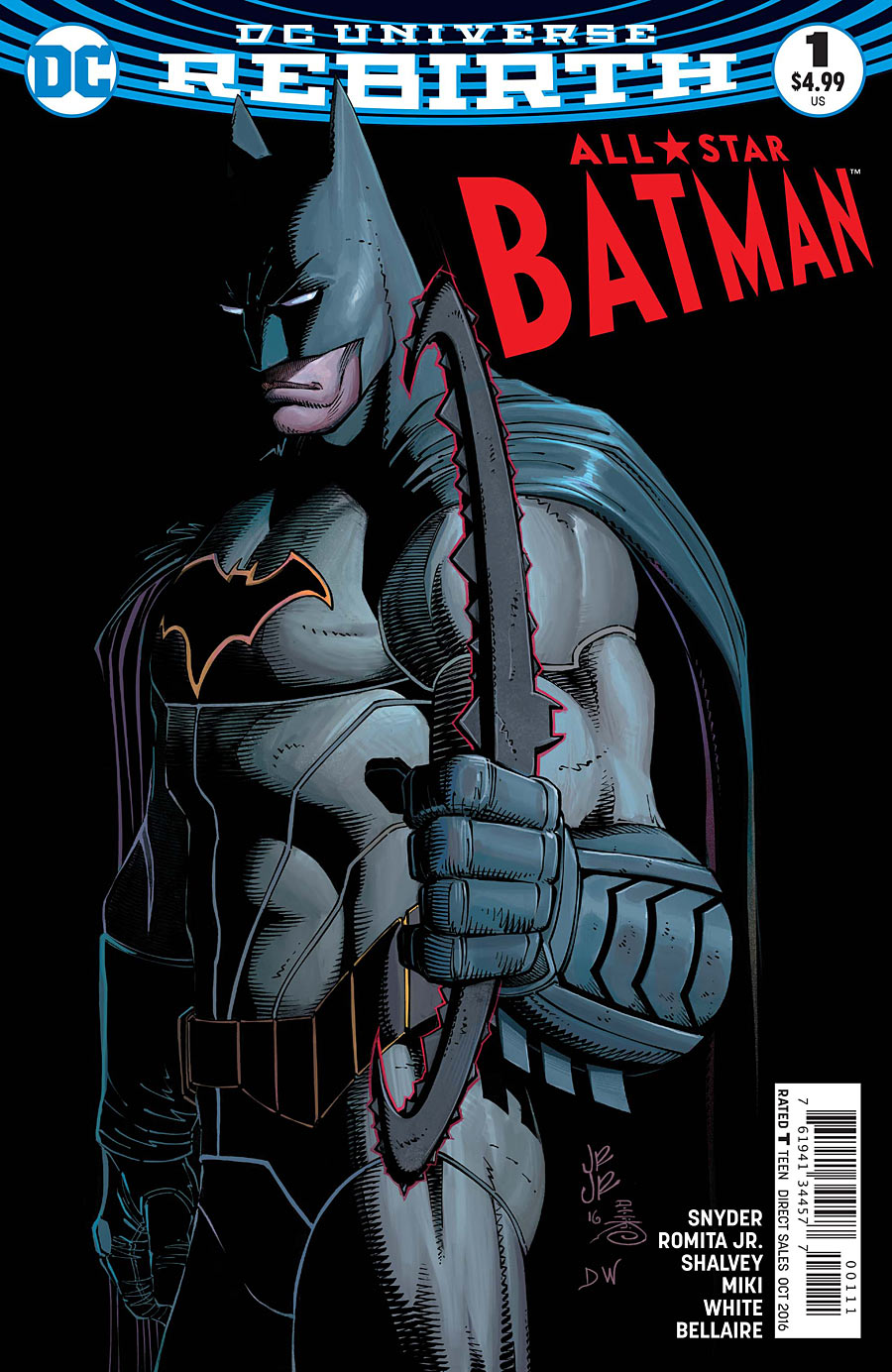 the helm of the big guy’s adventures, and John Romita Jr. is on art, so I feel like I’m in good hands. The cover of issue #1 is of thicker stock and we get a super-sized issue (24 page main story, eight page back up story.) However, this contributes to the $4.99 cover price, and if this continues, then I may have to leave All-Star Batman on the shelf.

Last we saw Two Face was issue #28 of Batman and Robin, where he may or may not have committed suicide, something left in the wind for two years, until now. There’s something to be said for judicious use of major names and a slow burn release of character details. In the Batman corner of “Rebirth” DC, “New 52” details don’t seem to be completely ignored, so I’m hoping we see Two Face’s potential suicide attempt addressed.

Snyder’s Two Face is going to be especially sinister, if issue #1 is any indication, and this is how Two Face should be. He is brilliant but psychotically twisted, but in different ways than the Joker or the Riddler (despite what film performances by Tommy Lee Jones and Aaron Eckhart would have us believe.)

Two Face has always held secrets over the rest of Gotham’s villains, but this time he’s daring the rogue’s gallery to take down Batman while Batman is transporting him to the as-of-yet undisclosed location. Snyder digs deep and pulls out some villains not seen in many years, like Firefly and Killer Moth. This leaves the reader to wonder what else Snyder has in store in future issues of All-Star Batman.

Duke (“can I call you Robin?”) Thomas looks to be playing an important role in All-Star Batman, as he is over in regular Batman. Batman’s plans for members of the extended Bat-family (can I call them Batman, Inc.?) remain a mystery to readers, and even to Commissioner Gordon, as he doesn’t know how to take Duke’s presence. Gordon can tell Thomas is young, but he sounds condescending when he says, “You know, you were very brave. You did good.”

The high point of All-Star Batman #1 is the art team (Romita Jr. on pencils, Danny Miki on inks, Dean White on colors.) Romita Jr.’s Batman is based on formerBatman artist and former Snyder partner Greg Capullo’s design. Even though Romita Jr. drew the cover and inside pages, the expectation I had for what the book would look like based on the cover was very different, and is a pleasant surprise.

The cover is heavily shadowed but the lines are clear and the colors stand out. The colors inside the book are stark and distinct still, but there’s a brushed look that reinforces to me how important inking and coloring are and how they impact an artist’s style. Too often the entire art team doesn’t get their due recognition.

The back up story has a different art team, the real-life dynamic duo of Declan Shalvey (pencils and inks) and Jordie Bellaire (colors.) The different art teams set the A and B stories apart stylistically, but with Snyder writing both, the feeling is that both stories are equally important.

All-Star Batman #1 starts the series off on strong footing, with the action bursting from the pages (or crashing through your local diner’s window, as it were.) I have faith the stories will be strong, as Snyder has shown himself to be a Bat-writer for the history books, and I’m excited about what the varying art teams will bring with each arc. All-Star Batman could very quickly be the best Bat-book.

Even in the Original Trilogy Vader was more of an embodiment of characteristics than an actual character per se. He had an arc but none of his actions were motivated, Vader simply was. The prequels attempted to rectify this but Hayden Christensen’s acting (or lack thereof) turned Vader into an angst repository and not a character.

One of the best elements of Kieron Gillen’s version of Darth Vader is that he’s a complete character. He’s never 100% terse brooding and he never chews the scene. Instead, Gillen’s Vader is the ultimate Vader. Vader is brooding and powerful but those qualities are always tempered with 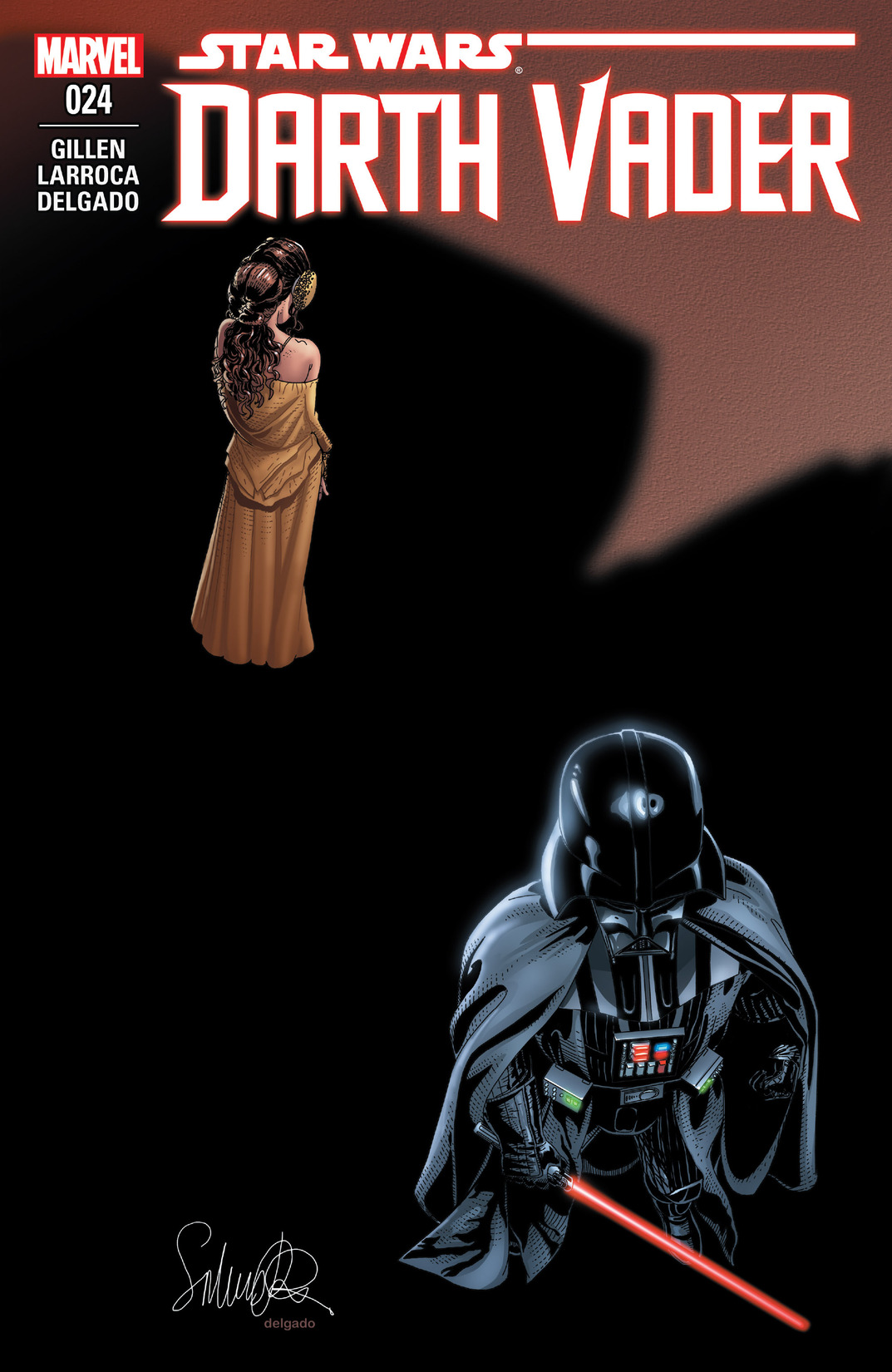 glimpses into the deeply insecure and vulnerable Anakin Skywalker that turned to the dark side because of that insecurity.

Darth Vader has been a bit up and down when looked at for its story. However, when viewed as a story about an insecure, power hungry man seeking redemption from the man who empowers him Darth Vader comes together beautifully.

That’s never been more visible than in issue #24. Taking place almost entirely in Vader’s interiority we get to see Darth Vader do battle not just with the ghosts of his past but a ghost of himself.

Salvador Larroca does an absolutely stunning job with these panels in particular. Comics don’t lend themselves to the fast and furious lightsaber combat featured in Revenge of the Sith but Larroca brilliantly stylizes jumps, parries, and ripostes against the backdrop of Anakin’s final battle on Mustafar.

In case you didn’t remember, Mustafar is a volcano planet and Colorist Edgar Delgado also does a stunning job with it. The occasionally white and yellow hot lava plays beautifully against the dark tones of the planet itself. These lighting differences make for beautiful glows on everything from leather straps to Vader’s dark, glossy helmet.

All of this parallels Mustafar as the turning point for many characters. Obi-Wan might have outright killed Anakin, Padme might have not have had her will to live mortally wounded, and perhaps Anakin may simply have been swayed by Obi-Wan and Padme. The tensions between light and dark, creation and destruction are beautifully framed.

These pages are so powerful that it’s easy to forget that there’s a reason that Vader has to explore his interior conflict. But Gillen lavishes in these pages and it shows. In this, the penultimate issue of Darth Vader, the series hits one of its emotional and visual high points.

Netflix’s The Get Down and Learning to Get Down